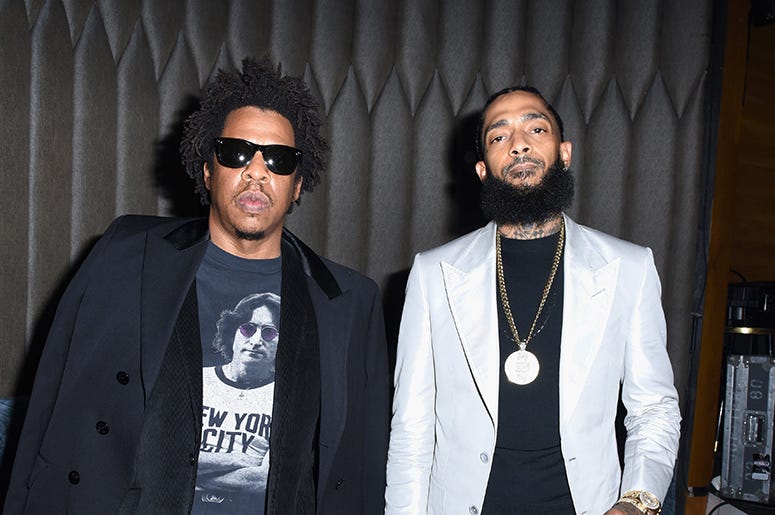 Nipsey Hussle and JAY-Z's first-ever collab, "What It Feels Like," has arrived from the soundtrack of the Fred Hampton biopic, Judas and the Black Messiah.

The track features Nip's posthumous vocals about climbing the ladder to success, rapping, "[People] gon test you see what your textures worth / Diamonds and pipes one of them press you'll burst."

It was even more special for JAY-Z, who was born on Dec. 4th, 1969 - the same day Fred Hampton was killed in his sleep during a police raid in Chicago.

"I arrived on the day Fred Hampton got mirked... hold up assassinated just to clarify it further," raps Jay. "Big stepper on the jet with my legs crossed / Black stones on my neck y'all can't kill Christ / Black Messiah is what I feel like."

It's no secret, JAY-Z was very fond of Nipsey Hussle's music and his efforts to support the Black community. Prior to the rapper's untimely death in 2019, JAY-Z purchased 100 copies of Nip's Crenshaw mixtape in 2013.

"What It Feels Like" is featured on the soundtrack, Judas and the Black Messiah: The Inspired Album. The album was executive produced by GRAMMY-winning producer Hit-Boy, Black Panther's Ryan Coolger, and features appearances from Rapsody, Kiana Ledé, Black Thought, Nas, Pooh Shiesty and more, including H.E.R.'s Golden Globe-nominated anthem, "Fight For You."

Judas and the Black Messiah is out today on HBO Max, starring LaKeith Stanfield, Dominique Fishback, and Daniel Kaluuya as Fred Hampton, the notable Black Panther leader, and activist.