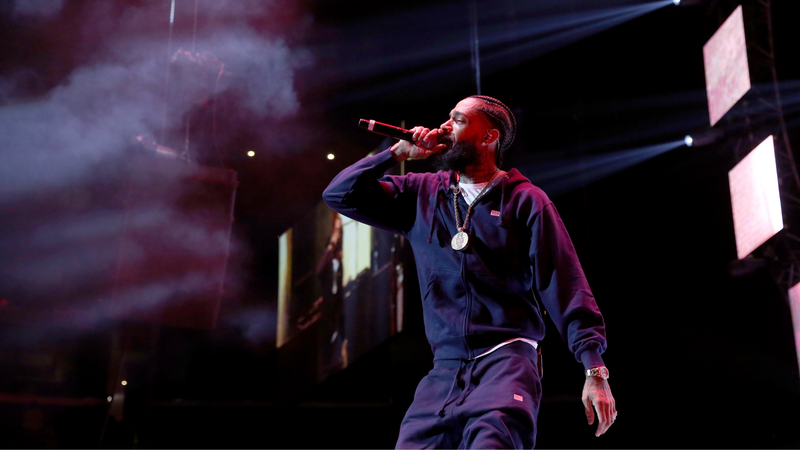 Nipsey Hussle is one of the most influential, nuanced and layered figures of this generation— not only in Hip Hop, but overall. Because of this, it was safe to assume many wanted to spotlight the life and times of Nip tha Great, especially after his tragic death. People gravitated to him. However, what many didn't know was that there was already a work in progress. Since journalist Rob Kenner met Nipsey in 2009 while serving as an Editor at VIBE, Kenner knew the story of Nipsey's life and career had to be told and it had to be told right. Thus, The Marathon Don't Stop: The Life and Times of Nipsey Hussle was born.

In an Audacy exclusive, Kenner spoke with us to discuss the in-depth albeit unofficial biography, his 3-year long process, the influence behind the Nipsey we know and love, Nip's early connection to Tupac and some potential plans he has regarding the New York Times bestseller, including the prospect of an expanded edition.

First things first, we had to know if Kenner chose to write the book because of who Nip was or did it (in a way) choose him. He took it back to 2009 when he first met the Los Angeles native when he came to the VIBE offices after the success of his ﻿Bullets Ain't Got No Name mixtape. "Having that perspective of him and particularly learning how much he loved a lot of the other artists who we had covered very closely in the pages of VIBE, I’m thinking of Snoop and BIGGIE and Pac (of course) and Jay-Z, these artists were essential to his whole consciousness and because I’ve been privileged to report on their lives and cover their whole journey, I felt like it was something that I needed to do. So yeah, you could say it chose me," Kenner explained.

He continued, "I’ve never thought of it exactly that way; it wasn't like ‘oh I think I’ll do this book on Nipsey cause I felt like it.’ It really felt like an obligation or a responsibility that I was fulfilling."

The process behind The Marathon Don't Stop was just as intricate and detailed as the man it's about. When Kenner was wrapping up a conversation with Nipsey during the Victory Lap press run, a 5-minute YouTube video turned into an hour-long discussion, which Kenner described as "mind-blowing and kinda life changing (if I dare say)." He explained, "I just realized there was a lot more that needed to be said and done than I could ever hope to capture in that short video and I was reflecting on the fact that there really hadn’t been any substantial magazine profiles of Nipsey Hussle."

Outside of the iconic GQ profile on Nipsey and Lauren London's relationship, Kenner felt more was needed. The organic process led him to start reaching out to as many people as possible. "Producers, managers, magazine editors who featured his work, family members, his inner circle. It kinda just built out from there. My process is really one of like accumulating knowledge and building one conversation to another one," he revealed.

"You know someone would speak to me then refer me to someone else and over time, I had amassed quite a number of interviews [...] I realized that I would be trying to tell his entire life story and then really had to step back and also place him in the context of the history of California and the history of America and Hip Hop too. He was such a fan of classic Hip Hop and really defined his own identity as an artist and as a man through his love of Hip Hop in a lot of ways. As somebody who’s been covering this music most of my life, I wanted to make sure and place Nipsey Hussle in that proper context of how he saw himself in Hip Hop and as well as how I saw him," Kenner stated.

Something that surprised Kenner when researching Nip was the discovery of Dexter Browne, who actually reached out to speak candidly once the book was announced. Browne, a civil engineer and photographer, moved into Rolling 60s territory with his wife and children. He meets Cuzzy Capone, and Browne asks to be introduced to "some street folks" in hopes of photographing "real gang culture." Browne opens up his home to local youth with Nip being one of them and it was there that Nip gained his name and recorded his earliest work.

@terracemartin AND MY NIGGA DEXTER BROWN! HE WAS BEFORE THE INDUSTRY. GOD SENT CUZ TO US.!

Kenner explained, "[Dexter] was really like an important mentor and beyond just creating a haven from the streets where Nipsey could live and make music, he instilled a lot of thoughts and philosophies that we associate with Nip in their conversations." It was with Dexter where the concept, "f*** the middle man" was birthed and evolved into one of Nip's classic and underrated mixtapes. "[Dexter] told the story of the first time Nipsey wanted to sign a record deal and Dexter had a lot of connections at labels because he had done photography for labels so he took Nipsey up to Interscope Records. [Nip] basically plays his demo for one of the big A&Rs at Interscope and the A&R says 'well the music’s a little rough, but you have a nice look and you should get in the gym and build up your lean muscle mass and work with a choreographer on some dance moves like a teen heartthrob kinda thing' and you can imagine Nipsey’s response. He just stood up, and left," Kenner stated.

Many were concerned about the family's involvement and Kenner has made it clear that The Marathon Don't Stop is an unofficial biography. However, he did get the chance to speak with Nip's siblings, Blacc Sam and Samantha. "It’s not a book that was done where I would collaborate with the family to tell the story that they were trying to tell," he explained, "[...] I had a chance to speak with his brother, Sam and his sister, Samantha and after that, I returned to the people who I knew to be the official spokespeople for his family and told them my intentions and said that I would love to work with them as closely as they were comfortable."

It was then revealed to him their focus regarding discussing Nipsey's life— a film. Kenner mentioned, "there’s a documentary in the works that I know is gonna be amazing. There’s a lot of stories that need to be told about Nipsey. This story is me as a music journalist kinda placing him in the context of music history. So, it’s not an authorized biography, but it’s a book that’s written with careful research and with the benefit of having spoken with members of his family, as well as his closest collaborators. I just felt that it was something that I should do as a music journalist to kinda lay the foundation of people understanding Nipsey’s career and why he’s so important."

Despite the documentary, Kenner isn't opposed to collaborating on a Nipsey biopic in the future. "If someone wants to do a scripted film, as long as the family is fully in support of it, I would be 100% down— I would be honored if my book were part of the effort to tell the story correctly [...] A lot of music journalism establishments slept on him. I think part of that is cause we’re based in NY and part of it is just Nipsey was just not concerned with being famous. He was concerned with being excellent. [Overall,] I mean his life is a very cinematic story. The obstacles he overcame I think are one of the reasons why people are strongly inspired by him, so I’m sure that it would make a great movie," he expressed.

Like this interview, which has been condensed for time and clarity, there was a lot cut from the final version of The Marathon Don't Stop. However, Kenner is hoping an updated/expanded edition may be released at a later date. For now, you can find The Marathon Don't Stop: The Life and Times of Nipsey Hussle whenever books are sold.