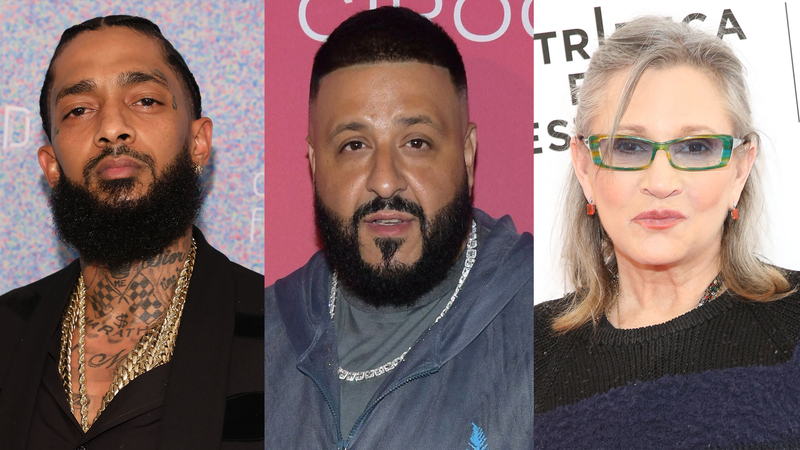 The Walk of Fame Class of 2022 has been announced, and among the 38 honorees is the late Nipsey Hussle, Carrie Fisher and DJ Khaled.

Among the 38 chosen both Hussle, who was shot to death in March 2019 at age 33 and Fisher who died of cardiac arrest in December 2016 at age 60 - are the only two posthumously receiving the honor.

Some the others joining the ranks for the TV and Film (Motion Pictures) categories are Ricky Gervais, Peter Krause, Norman Reedus, Tracee Ellis Ross, and Kenan Thompson for television. And Macaulay Culkin, Michael B. Jordan, Salma Hayek, Regina King, Jason Momoa and Tessa Thompson - for film.

Other categories include Live Theatre/Live Performance, Radio, and Sports Entertainment.

While the honor is momentous for all included, see DJ Khaled's reaction above for further proof (not that it's needed). Two of this years’ selections are becoming second-generation stars to receive the honor.

The first being Fisher, the daughter of Hollywood stars Debbie Reynolds and Eddie Fisher. As well as Ellis Ross, the daughter of Motown legend Diana Ross, was selected in the television category

Honorees were chosen from among hundreds of nominees by the Hollywood Chamber of Commerce’s Walk of Fame selection panel, which is composed of Walk of Famers.

“The Panel did an amazing job choosing these very talented people,” said radio personality Ellen K, chair of the Walk of Fame selection panel while announcing this years selections. “We can’t wait to see each honoree’s reaction as they realize that they are becoming a part of Hollywood’s history with the unveiling of their star on the world’s most famous walkway!”

For more info and the full list of honorees, check out the official announcement here.