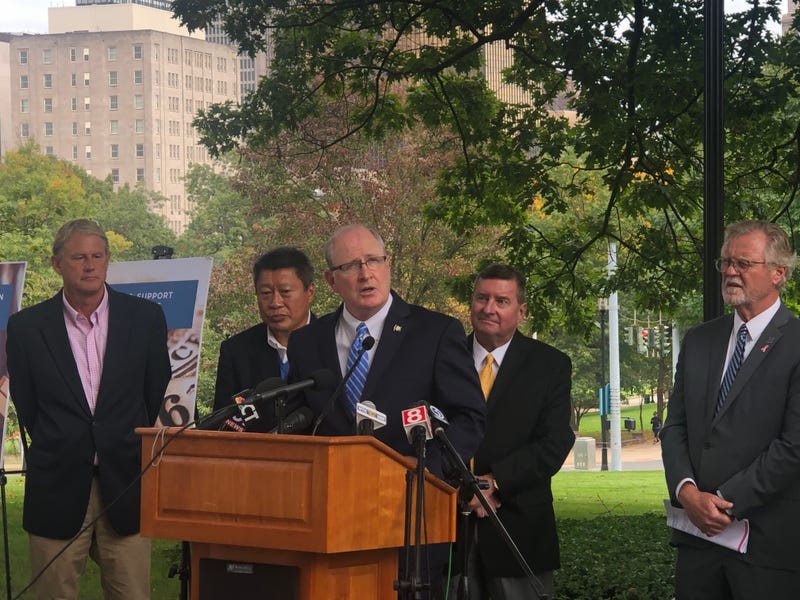 "We have a call to action. We have an opportunity for change and we believe that the youth of our state are worth fighting for," Senate Republican Leader Kevin Kelly said. Photo credit Daniela Doncel/WTIC
By Daniela Doncel, WTIC NewsTalk 1080

With the ever-growing increase of juvenile crime, car thefts and other violent crime, Senate Republican Leader Kevin Kelly stressed that residents are beginning to feel unsafe in Connecticut, bringing about the need to improve how the state responds and prevents crime.

Calling it a holistic approach, Kelly said the plan tackles the criminal justice system in both adult and juvenile cases, job and housing opportunities and rolling back on police reform to provide officers necessary funding and resources.

Among the proposals for criminal justice reform, Senate Republicans are calling for a revision in the process of transferring serious juvenile offenders to adult court. One of the recommendations is lowering the age of those who can be transferred to adult court from 15 to 14 for murder, violent sexual assault and violent crimes involving firearms.

For crime prevention, Senate Republicans are looking to provide additional support for community groups that promote paths to career, such as enhancing vocational programs recruitment, and for young people with mentorship programs.

As for law enforcement, republicans proposed several revisions to current policies that ensure police officers have the resources they need to investigate and prevent crimes, including additional funding for social media and online data intelligence tools.

“We need immediate action to properly respond to crime. We need to ensure law enforcement and our justice system have the tools to keep all people safe. But it's so much more than that.” - @21KevinKelly

A special session on this issue is long overdue, according to Kelly.

"Quite frankly, I thought we should've used the last special session for this. I mean, this is the true emergency that I think is facing Connecticut. This has innocent lives, individuals who are dying on our streets. We need to deal with this. This is an emergency," Kelly said.

Democratic Senate Judiciary Committee Chair Gary Winfield acknowledged that he agreed with some of the recommendations outlined in the plan.

"Whether these things are things that should bring us into special session, on that, I think the answer is no," Winfield said.

In a written statement, Senate Democrats pointed out that some of the proposals for accountability and juvenile justice do not require legislative action but can be implemented through procedural changes with the judicial branch.

Senate Democrats also stated that most Republicans voted against state budgets that had funding for some of the same types of programs that are deemed essential to public safety in the plan.

According to Kelly, Senate Republicans have shared the plan with the governor and congressional leadership to begin the conversation on the proposals.