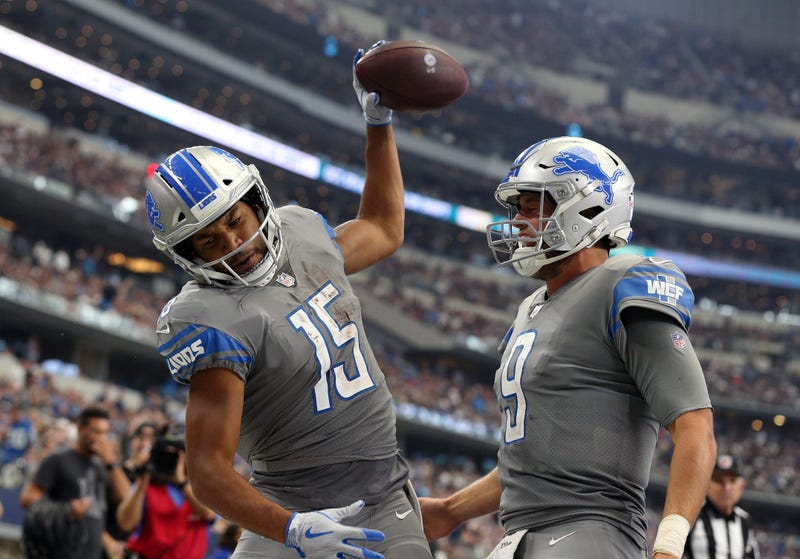 "To me, as of now, where I am today, Stafford’s been the quarterback I’ve played with," Tate told Detroit's NBC 4 over the weekend. "The guy can flat-out play. He’s tough and his attitude's amazing. He just wants to play ball. For me, I have nothing but praises for him.

"It's almost unfair that he’s such a good player and doesn't have playoff (wins) or a ring to show for it. That kind of hurts in my heart that I wasn’t able to help change that. But I think over his career, if you put him in another organization, maybe things are different. I don’t know -- because I’ve played with some guys over my years that I’ve won playoffs games with that I don’t think are as good."

Strong words from Tate, who, it should be noted, was speaking on-camera to a Detroit-based news station. Who knows if that colored his response.

Either way, it's easy to believe him. The best four seasons of Tate's career, to date, came with Stafford and the Lions from 2014-17. He was one of only two NFL players to log at least 90 receptions and 800 yards each of those four years. The other was Antonio Brown.

Tate certainly had some productive seasons with Wilson in Seattle, including their championship campaign in 2013. But on the whole, his numbers pale in comparison to those he put up with Stafford.

As for Wentz, Tate played just five games with him last season in Philadelphia.

Tate, who turns 31 in August, signed a four-year, $37.5 million contract with the Giants in the offseason. While he's clearly focused on what lies ahead of him in New York, he said the Lions are on the right path.

And as Tate said after he was traded last season, he'll always value his time with the Lions.

"Detroit will always have a place in my heart and I’ll always root for Detroit, except for when they’re playing the Giants now. But I’ll miss that place. When you spend four and a half years in one place and watch the city grow and watch guys come in as rookies and grow to be dominant players and help win games, it's something special," he said. "Forever thankful for that organization and love them to death."