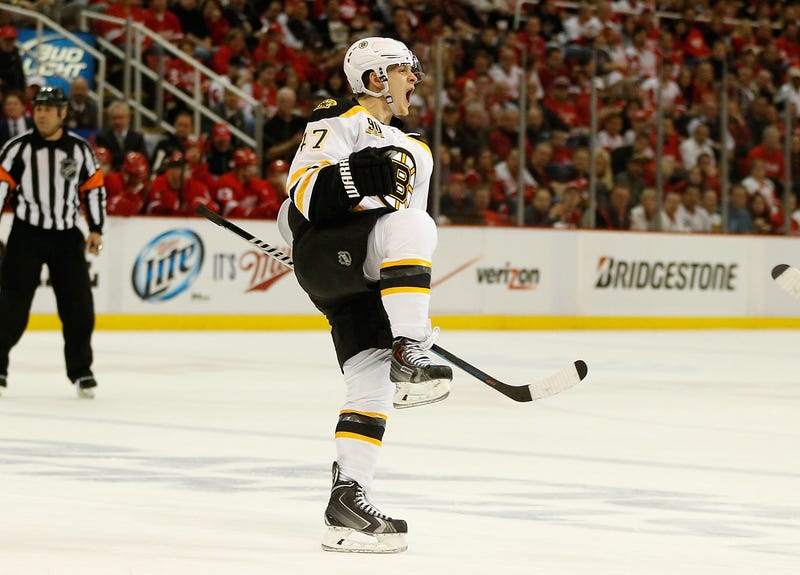 The context of free agency is about to change for the Red Wings. With a number of cumbersome contracts expiring this summer, it's no longer a matter of how much they can spend. It's how much they want to. They're finally in position to give this rebuild a jolt.

That's exciting, for the organization and its fans. Steve Yzerman won't be cutting checks just because he can, and the Wings aren't a player or two away from where they want to go. But Detroit stands to have somewhere close to $40 million in cap space, one of the highest figures in the NHL. If Yzerman decides it's time to make a splash, here's one name to watch: Torey Krug.

The Bruins defenseman spoke at length about his contract situation last week, namely that he and the organization haven't "made any progress" recently on a new deal. Krug, a Michigan native and childhood Red Wings fan, will be a free agent this summer. He's said he'd like to stay in Boston, and Boston would like to keep him. But that might mean Krug taking a hometown discount.

How about a hometown payday, a few hundred miles to the west?

Krug to the Red Wings makes a good deal of sense, aside from the geographical ties. Detroit can certainly give him the $7-8 million per year he'll command on the open market. Sound high? A puck mover and power play QB extraordinaire -- with some snarl, to boot -- Krug ranks sixth among NHL defensemen in points over the last five seasons, ahead of the likes of Kris Letang, Keith Yandle and Drew Doughty.

The timing might not be ideal, but Krug won't turn 30 until late next season. The Wings can give him a long-term deal and trust he'll still be at or near the top of his game when they're back in playoff contention. And remember, Krug himself instantly accelerates that process. That's why you add him now, when you have the chance -- not that we presume to speak for Yzerman.

One man we can speak for is Jeff Blashill. He might be the most important piece of this picture. Blashill would sign Krug yesterday, if the decision were his. He knew him when he was nobody, coached him into somebody in the USHL and continues to bang the drum for him today. You won't find a bigger Krug fan in the NHL -- and you won't find many Blashill fans bigger than Krug.

Heck, let's allow Blashill to speak for himself. Here's what he had to say about Krug last season.

"I love Torey. Torey's one of my favorite players I've ever coached. You want to talk about big plays at big moments, I'll use the term baller. He's a baller. When the game's on the line, he's got ice in his veins. He knows how to make plays. I knew him as a 15-year-old when he was very, very short. I remember him and Cam Fowler bouncing around a Michigan select festival, and he was running the show as this little guy.

"Then I saw him three years later as an 18-year-old, was able to get him on my team in Indiana and we won a championship there. I can't say enough good things about Torey. He's a great person, plays with an edge. I like him a lot."

And here's what Krug had to say about Blashill in response.

"He was a guy that took a chance on me. To be honest, before him I thought my hockey career was probably going nowhere and it was going to be more of a recreational thing for me. I owe a lot to Jeff Blashill. Not only did he take a chance on me, but he helped develop me into the player I am today. There's a lot of traits in my game today because of him."

Krug's Old-School Helmetless Shift May Be Among NHL's Last
We should pause to acknowledge Blashill could be gone by next season, in which case this conversation is moot. But it sounds like Yzerman intends to bring him back. If the Wings sit down with Krug this summer, the money will matter. So will the homecoming. So will the lure of Little Caesars Arena. But the chance for Krug to reunite with Blashill might be the club's strongest pitch.

From a roster standpoint, Krug would be a good fit in Detroit. He could fill the left-side void on the team's top D pair, both now and in the future. And he feels like the ideal partner for wunderkind Moritz Seider, who's poised to step in on the right side. How's that look in a couple years? Now add Filip Hronek and Danny DeKeyser. That gives Detroit a top four it can feel good about, perhaps as soon as next season.

We're making some assumptions here. That Krug will reach free agency. That the Wings will indeed pursue him. Most of all, that the interest is mutual. Krug would be leaving a Cup contender in Boston, where he's spent the first nine years of his career, for a last-place team in the throes of a rebuild. And he'd be doing so in the prime of his career. That's quite the risk.

Signing with Detroit used to be a reward. Beyond the money, it was a chance to play for a proven winner. The Wings can't pretend to offer that now. What they can offer Krug is the payday he's earned, the experience of coming home and the opportunity to play for a favorite coach. The reward for Krug, in a perfect world, would be returning his childhood team to the place he left them.

It's been a long while since the Red Wings landed a big fish in free agency. The last time they really tried, Yzerman kept Steven Stamkos in Tampa without breaking a sweat. Yzerman's on this side now, and the Wings are in position to cast another line. Here's betting they have their eyes on Krug. Let's just see if Krug has his eyes on them.