There is blame to go around for the Lions' 0-7 start, players and coaches at fault. But there are no fault lines in the locker room under Dan Campbell after three fractured years under Matt Patricia.

"It’s as close a team as I’ve been a part of, especially with what we’ve gone through," Jared Goff said Tuesday on the Karsch & Anderson Show. "And it’s a credit to Dan and what he does for us weekly. I think it’s also a credit to our players and who we have in this building and the guys we rely on and our leaders, because it could easily go the other way. It could easily be not fun every day and you show up on Wednesday and you’re not happy to be there, and it hasn’t been that way.

"We obviously want to get the results that we want, and we need to get them quickly, but the joy in playing the game and being around each other is still there."

The Lions were always going to be bad this season, no matter the belief on the inside. Then they lost a slew of starters, including their top wide receiver, top pass rusher, top cornerback and top two offensive linemen, and now they're 0-7. No one should be surprised. The surprise was a near-victory over Lamar Jackson and the Ravens in Week 3, a wild comeback against the Vikings in Week 5 and another gutsy effort last week against Matthew Stafford and the Rams. There's no quit in Campbell's team.

Campbell went for it in LA. He took risks that could have led to an ugly loss and nearly landed a signature win. An onside kick and a fake punt in the first five minutes and another fake punt in the third quarter helped Detroit carry a lead into the fourth.

"I loved it," said Goff. "I thought it was aggressive and it was fun. I think (the benefit) is two-fold: you get the lift on your side and you can see the other side get a little deflated."

Through seven games, this much is clear about Campbell: he doesn't coach scared. The Lions lead the NFL in fourth-down attempts, for better or worse. Campbell's aggressiveness has often backfired this season, but maybe it's worth it in the long run. The message is that he believes in his players and doesn't fear losing.

"As a player, whether it works or not, you respect the fact that your coach is going for it and wants to win the game and is pulling out everything to do it," Goff said.

Given the growth of Detroit's young players, Campbell believes the team is due 'massive dividends.' It might not happen this year, or even next year. But the investment has been made. In the meantime, Campbell will keep coaching the team he has and gunning for the win he doesn't, whatever it takes.

"What I’m charged with is the players on this roster and pulling out the most of them with this coaching staff," he said Tuesday. "Our job is to field the best team we can, make it the most competitive team and find ways to win games. That’s what I’m charged with and I’ll do that. I still think that we got enough here to win games, I just do. And I love the way these guys are built." 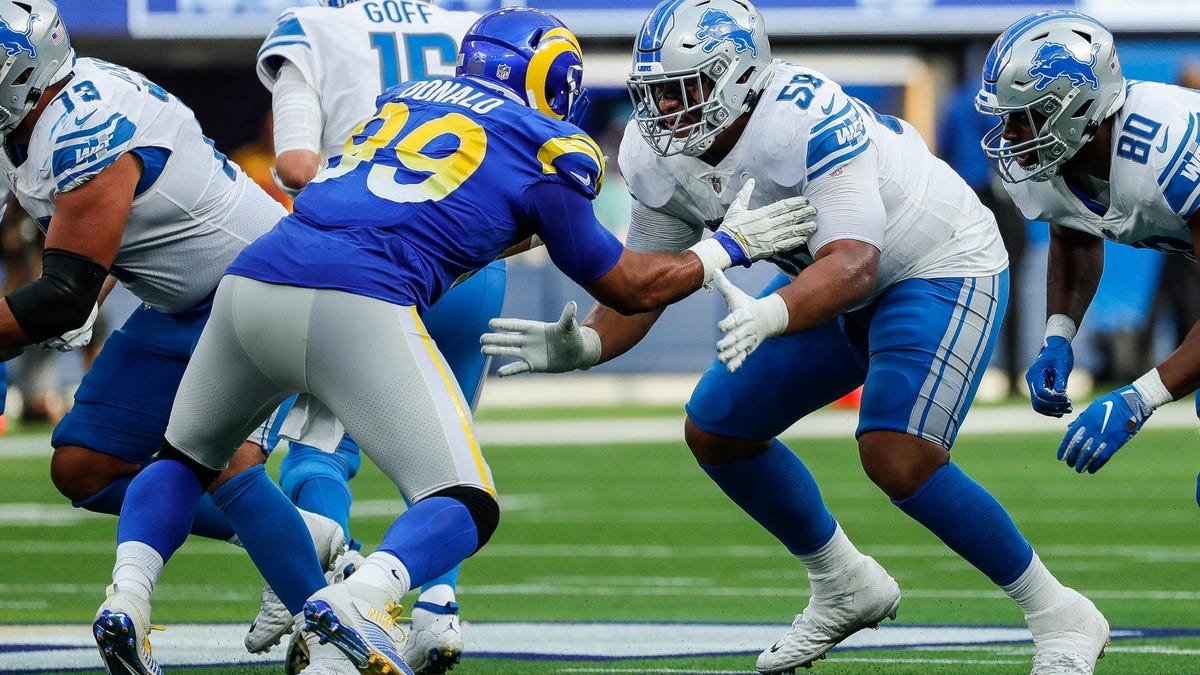 Other highlights from Goff's interview on 97.1 The Ticket:

On the play he wants back against the Rams: "I wish that I would have completed that pass to (D'Andre) Swift down there near the goal line (on third down in the fourth quarter). There was a little miscommunication from him and I, but I think that one may have shifted the momentum. He may have walked in if we had been on the same page there. ... We just weren’t on the same page. It happens. Unfortunately it happened in a situation like that, but something that, again, we’re working through and we’ll be good moving forward."

On Kalif Raymond earning a more valuable role: "He’s been valuable for us since we got him and a guy that we’ve really relied on. A big part of our offense, whether it’s blocking, receiving, I know he’s done some return stuff. He’s been as important as anybody this year and it was good to see him get a chance to shine this weekend. He’s reliable. He’s where he needs to be, he’s trustworthy, he’s on time. He catches the ball when it comes to him. He makes plays, like the diving catch down the sideline, plays that above-average receivers make and it’s good to see."