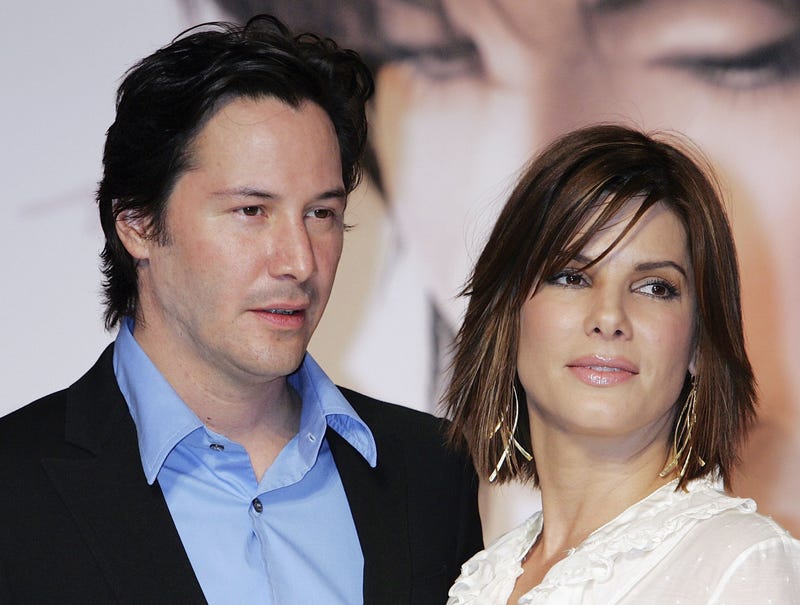 Keanu Reeves may be best known for his roles on "Parenthood," "Bill &Ted," and "River's Edge," but it's his romantic life that's taking the hot seat.

Specifically, whether or not he ever had a relationship with "Speed" co-star Sandra Bullock.

In a recent interview in Esquire, Bullock explained that despite their scorching chemistry in the 1994 film, the two never pursued anything more than friendship.

“But who knows?” she explained. “Keanu’s a guy who, I feel like, is friends with every woman he’s ever dated. I don’t think there’s anyone who has something horrible to say about him. So maybe we could have survived. I don’t know."

She went on: "But we didn’t have to survive anything. We just get to grow up together on parallel roads and tip our hats and meet for a dinner and try to work together. And the longer time goes on, the more in awe I am of the human being. Would I have been able to say that if he had dumped me and made me angry? Probably not.”

She explained that they did become fast friends, had the same publicist for a bit, and even shared a social circle. The actress also recalled a sweet tale from 1995 that implied they had a deeper connection than just sharing a publicist’s phone number.

After Bullock mentioned she never had champagne and truffles, the "John Wick" star showed up at her door a few days later with the treats in hand along with some flowers.

Keanu didn’t leave empty-handed, either. During their impromptu hang, Bullock painted Reeves’ nails, which the outlet notes might’ve been a surprise for the woman that Reeves was about to leave to meet for a date.

Reeves’ mysterious nature seems to go back awhile as Bullock commented on the sometimes confounding communication skills of the “Matrix” man.

“That’s what I mean that it drives you crazy,” Bullock said. “When I first met him, I would spend as much time as I could filling a silence, just to feel comfortable. And the more I jibber-jabbered on, the quieter he would get. And I thought, I don’t understand what’s happening! He’s looking at me with eyes of confusion. He’s quiet. Did I say something to offend him? And then a day or two later, he would arrive with a note or a little package, saying, ‘I thought about what you said.’ And he would have his response.”

Bullock co-starred with Reeves again in "The Lake House" in 2006 and noted she would be happy to work with him again. In fact, she even has a pretty great elevator pitch.

“I would love nothing more than to do a comedy with Keanu before we die," she said. "Just laugh with him. He’s funny. We can be 75 — it’ll be even better then, like an old-people Cocoon thing. We play two funny old people. A road trip. Just put us in an RV as old people. It’ll be the bookend of Speed! We’ll just be driving really slowly. Pissing the world off. There’s our movie.”