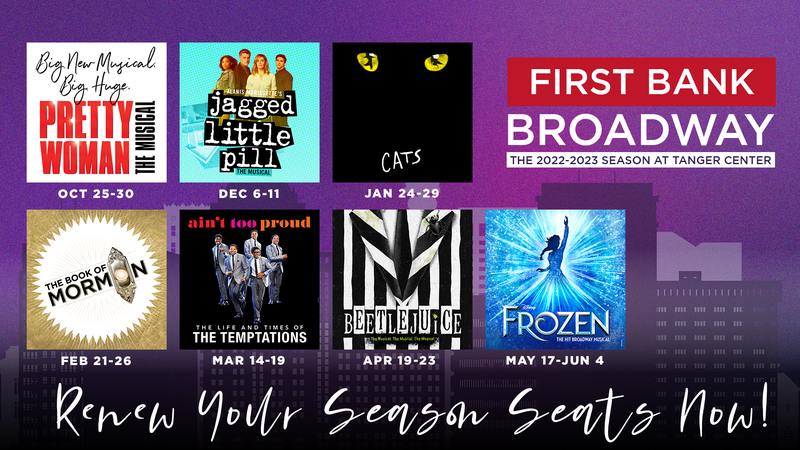 In partnership with Nederlander and Professional Facilities Management (PFM), the Steven Tanger Center for the Performing Arts welcomes Broadway title and name series sponsor, First Bank, and announces shows for its 2022-23 Broadway season. After a record-breaking 17,400 Season Seat Members in its inaugural season, Tanger Center invites the Triad to “Dare to Dream” for its second Broadway season. A seventh show has been added to the season lineup as Direct-from-New-York shows make their premieres in the Piedmont Triad.

“We are thrilled to bring the second season of Broadway entertainment to Triad patrons,” said Nick Scandalios, Executive Vice President of the Nederlander Organization. “After a wildly successful inaugural season in a beautiful new venue, we are grateful to bring these seven extraordinary productions to this amazing community.”

Lynn Singleton, President of PFM, noted, “Along with our partners at Nederlander and the City of Greensboro, we are proud to help bring first-class shows to the Tanger Center. We look forward to another great season of Broadway in the Piedmont Triad!”

“Our Broadway partners, Nederlander and PFM, have delivered another spectacular lineup of premier national touring Broadway productions for our second season,” said Matt Brown, Managing Director of the Greensboro Coliseum Complex. “We look forward to building on the incredible public response to our inaugural season as the Tanger Center continues to draw capacity crowds to downtown Greensboro and generate huge economic impact for the Piedmont Triad region.”

The following information outlines the purchasing process for the First Bank Broadway, 2022-23 Season at Tanger Center:

• Current Broadway Season Seat Members have first access to seats by renewing their current subscriptions by May 4 at FirstBankBroadway.com and clicking on “Renew Here.”
• The public on-sale for Broadway season memberships will be Monday, June 6 at 10 a.m. at FirstBankBroadway.com
• Patrons can register to become a Tanger Center Insider for updated news and information or sign-up for early access to Season Seats here.

Please note that the on-sale dates for individual tickets to each of the seven shows is to be announced. Season Seat Members will have first chance to guarantee their seats to all seven Broadway season shows.

Based on one of Hollywood’s most beloved romantic stories of all time, PRETTY WOMAN: THE MUSICAL is now on tour! PRETTY WOMAN: THE MUSICAL springs to life with a powerhouse creative team led by two-time Tony Award®-winning director and choreographer Jerry Mitchell. Brought to the stage by lead producer Paula Wagner, the show features an original score by Grammy® winner Bryan Adams and Jim Vallance, and a book by the movie’s legendary director Garry Marshall and screenwriter J. F. Lawton. PRETTY WOMAN: THE MUSICAL will lift your spirits and light up your heart. Are you ready to fall in love all over again?

SOME SHOWS YOU SEE. THIS SHOW YOU FEEL.

Joy, love, heartache, strength, wisdom, catharsis, LIFE—everything we’ve been waiting to see in a Broadway show— is here in the exhilarating, fearless new musical based on Alanis Morissette’s world-changing music.

Directed by Tony Award winner Diane Paulus (Waitress, Pippin, upcoming 1776) with a Tony-winning book by Diablo Cody (Juno) and Grammy-winning score, this electrifying production about a perfectly imperfect American family “vaults the audience to its collective feet” (The Guardian). “Redemptive, rousing and real, JAGGED LITTLE PILL stands alongside the original musicals that have sustained the best hopes of Broadway." (The New York Times)

You live, you learn, you remember what it’s like to feel truly human… at JAGGED LITTLE PILL.

Rediscover CATS—the beloved musical with breathtaking music—including one of the most treasured songs in musical theater, "Memory.” Featuring new sound design, direction and choreography for a new generation — experience CATS for the first time as it begins a new life, or let it thrill you all over again!

The New York Times calls it “The best musical of this century.” The Washington Post says, “It is the kind of evening that restores your faith in musicals.” And Entertainment Weekly says, “Grade A: the funniest musical of all time.” Jimmy Fallon of The Tonight Show calls it “Genius. Brilliant. Phenomenal.” It’s THE BOOK OF MORMON, the nine-time Tony Award®-winning Best Musical from the creators of South Park. Contains explicit language. For more information, visit BookOfMormonTheMusical.com.

AIN’T TOO PROUD – The Life and Times of The Temptations is the electrifying new smash-hit Broadway musical that follows The Temptations’ extraordinary journey from the streets of Detroit to the Rock & Roll Hall of Fame.

Nominated for 12 Tony® Awards and the winner of the 2019 Tony Award for Best Choreography, it’s a thrilling story of brotherhood, family, loyalty, and betrayal during a decade of civil unrest in America. Set to the beat of the group’s treasured hits, including “My Girl,” “Just My Imagination,” “Get Ready,” and “Papa Was a Rolling Stone,” AIN’T TOO PROUD tells the unforgettable story of the legendary quintet that Billboard Magazine named the greatest R&B group of all time.

He earned his stripes on Broadway… now the ghost-with-the-most is coming to Greensboro!

It’s showtime! Based on Tim Burton’s dearly beloved film, this hilarious musical tells the story of Lydia Deetz, a strange and unusual teenager whose whole life changes when she meets a recently deceased couple and a demon with a thing for stripes. With an irreverent book, an astonishing set, and a score that’s out of this Netherworld, BEETLEJUICE is “SCREAMINGLY GOOD FUN!” (Variety).

From the producer of The Lion King and Aladdin, FROZEN, the Tony®-nominated Best Musical, is now on tour across North America, and the critics rave, “It’s simply magical!” (LA Daily News). FROZEN features the songs you love from the original Oscar®-winning film, plus an expanded score with a dozen new numbers.

An unforgettable theatrical experience filled with sensational special effects, stunning sets and costumes, and powerhouse performances, FROZEN is everything you want in a musical: It’s moving. It’s spectacular. And above all, it’s pure Broadway joy.