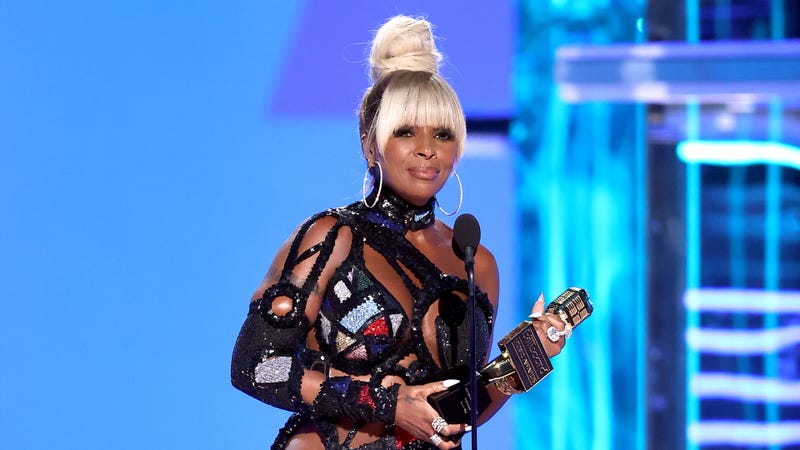 After and incredible introduction from none other than Janet Jackson, Mary J. Blige took to the stage to accept her much deserved Icon Award at this year’s Billboard Music Awards.

But before she stepped her glamorous self in front of the mic, Mary received a shout-out to her incredible career, and some words of admiration from a list of fellow adoring artists, via video montage. From H.E.R., who noted she learned from Blige how to be her authentic self, and Ella Mai who said she looks to Mary J. for inspiration on how to be strong. As well as Taraji P. Henson, and Missy Elliott who simply put it — “all I can say is all hail the queen,” and that pretty much says it all.

An undeniable voice in the history of R&B and Hip Hop, Mary has put in the work for the last 30 years, leading her on this journey to reach Icon status. A fact she made a point to make during her emotional honesty and thankful acceptance speech. “The way the world is now, I think people think Icons are born that way, they become a legend over night, but that is definitely not the case. It takes a lot of time, hard work and a lot of survive and trial and error to achieve greatness.”

The icon went on to express, “what an icon means to me, is overcoming obstacles to accomplish the unthinkable, and to be wildly admired for having influence over a multitude of people, and that is what I’ve always represented.”

“I’ve been on this journey for a long time, one that didn’t always look the way you see me now. One that is filled with a lot of heartache and pain, but God helped me to channel those experiences and emotions into my music.”

After quickly discussing and defining her come-up as a “ghetto fabulous” artists, adding “and I still am,” making note that “now everyone wants to be ghetto fabulous,” Blige went on to thank a laundry list of friends, family members and supporters — including BBMAs host Diddy, whom Blige referred to as Puff Daddy and described as her “big brother.” As well as Dr. Dre and Jimmy Iovine for the opportunity to perform at the Super Bowl Halftime show, along with many many more.

Before closing out her speech, with a recognition to her “phenomenal, diehard, unbelievable fans,” the icon served perhaps the best line of the evening. "The message of my music has always been, we are not alone in our struggles,” Blige said, “I finally found my real love, and that real love is me.”

Love that as much as Mary loves Mary. Congrats Icon!