Best Buy is downsizing despite seeing a huge uptick in online sales.

The retail chain said it laid off 5,000 full-time employees earlier this month and plans to close more stores later this year, according to CNN.

The reduction in workforce comes as the company saw massive growth in online sales due to the coronavirus pandemic.

With the change in shopping patterns, the company cut the jobs as less people are buying in its physical stores.

Best Buy said that it laid off 5,000 workers this month and is planning to close more stores this year as more consumers buy electronics online. Best Buy expects 40% of its sales to come from online purchases this year.https://t.co/E04pfJ1OG7

According to the Associated Press, Best Buy saw online sales increase by 89% between November 2020 and the end of January 2021, compared to the same time last year.

Despite the full-time layoffs, the company plans to hire 2,000 part-time workers and will retrain staff to assist with the surge in online orders. Best Buy also plans on reallocating space inside stores for fulfilling and shipping online orders and to accommodate the increase in curbside pickups.

While the company didn’t disclose which stores or how many will shutter, CEO Corie Barry noted the company closed 20 stores in each of the last two years and plans to close a higher number this year, per CNN.

Best Buy currently employs more than 100,000 workers and has approximately 1,000 stores in the United States. 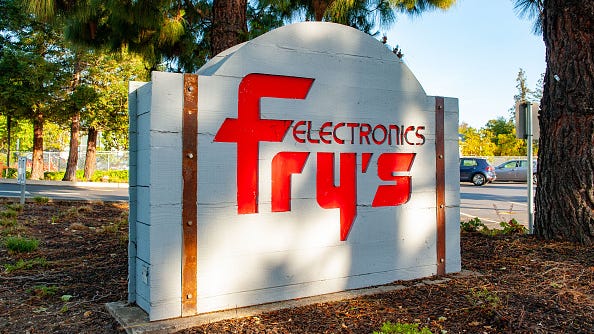 Fry's, which was founded in 1985, had struggled in the face of increasing competition from fellow retailers, including Amazon.com and Best Buy.