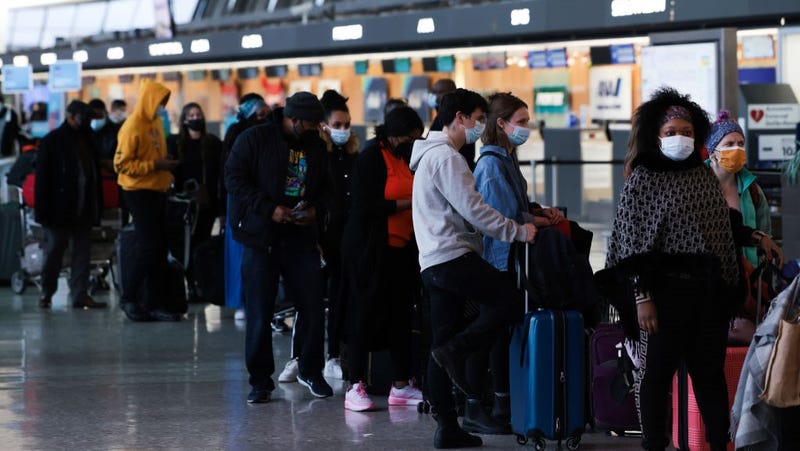 DULLES, VIRGINIA - DECEMBER 27: Passengers wait in line to check in for their flights at the Dulles International Airport on December 27, 2021 in Dulles, Virginia. Photo credit Anna Moneymaker/Getty Images
By Colin Martin, Audacy

Earlier in June, AAA predicted that 3.55 million Americans will be traveling by air for the Fourth of July, although, thousands of flights have already been canceled and it's not expected to improve by the holiday weekend.

Flights all across the United States have been getting delayed and canceled over the last few months, as tons of Americans have been itching to travel in the summer after two years of the COVID-19 pandemic. Add to that, Delta is allegedly going to allow travelers to change their flights over the Fourth of July holiday for free, which Thrifty Travel wrote is an, "unparalleled move that suggests the Atlanta-based carrier is bracing for even more delays and cancellations."

But airlines have been dealing with massive pilot and staffing shortages, as there were already 1,800 flights canceled this week before the Fourth of July Weekend, according to The Hill.

A Federal Aviation Administration (FAA) spokesperson criticized airlines for how they managed pandemic relief money, and suggest they should have been able to be fully staffed.

"People expect when they buy an airline ticket that they’ll get where they need to go safely, efficiently, reliably and affordably. After receiving $54 billion in pandemic relief to help save the airlines from mass layoffs and bankruptcy, the American people deserve to have their expectations met," a FAA spokesperson said.

Amid the ongoing pilot shortage, airlines hope to hire 12,000 pilots in 2022, but The Hill noted that the FAA only issued about 5,000 pilot training certifications last year.

The Airlines for America (A4A) sent a letter on June 24 to U.S. Secretary of Transportation Pete Buttigieg "to ensure airline operations remain safe and reliable over the summer travel season," and requested a meeting to discuss staffing plans for the Fourth of July Weekend.

"As a follow-up to our recent conversation about planning to ensure that airline operations continue to be safe and reliable over the July 4th travel weekend, I wanted to reiterate and emphasize our members’ commitments to doing everything within their power to deliver a safe and on-time product not only over the holiday weekend but throughout the entire summer," the A4A said in the letter.

In it's prediction for July 4th travel, AAA also gave tips for Americans ahead of what's expected to be a very busy and hectic weekend. Their first tip was to "Have a plan A, B and C" just in case things don't go as planned, and mentioned to look for discounts to offset the high prices of airfare, hotels, and even car rentals.

"Flights, car rentals, accommodations, tours, cruises and other activities are in high demand and availability may be limited, which will impact pricing," AAA said. "Finding last-minute deals is unlikely so it’s recommended to look for discounts and rewards, usually available through a membership like AAA."

AAA's second tip was to "B-E-T on a breakdown-free trip" by going in for a car inspection if your travel plans involve driving.

"Make sure to get a full vehicle inspection ahead of any long trip but especially for components like a vehicle’s battery, engine and tires," AAA said. "Even a vehicle in top shape can run into an issue so it’s a good idea to pack a well-stocked emergency kit and have roadside assistance just in case."

"Based on AAA booking data, Friday, July 1 is shaping up to be the busiest day for air travel during the holiday weekend (June 30 – July 4) with Monday, July 4 being the lightest," AAA said. "For those hitting the road, the Thursday and Friday before the holiday are anticipated to be peak traffic days."