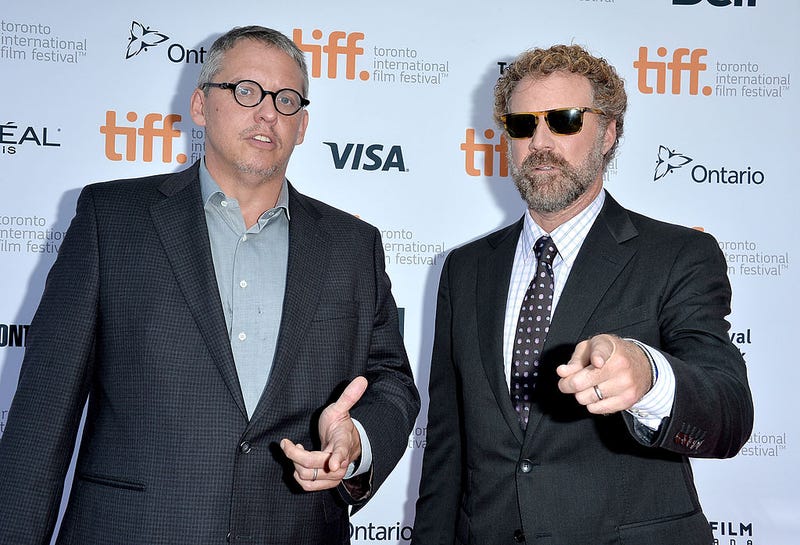 Even the wackiest guys have their serious sides.

Will Ferrell and Adam McKay were kind of the Robert De Niro/Martin Scorsese of bro-comedy for a while there.

Their seemingly perfect match collaborations as actor/director and co-writers created arguably the largest body of hit comedy of the last 20 years.

Then suddenly in 2019, as the New York Post reminds, they dissolved the partnership of their Gary Sanchez Productions. Cordial press release statements came: “The two of us will always work together creatively and always be friends. And we recognize we are lucky as hell to end this venture as such.”

But behind the scenes, the two were apparently no longer so cordial.

In a Vanity Fair interview, McKay, 53, finally addressed the dissolution head on.

According to the director, the feud first stemmed from that bane of Hollywood friendships --  a casting decision.

On the precipice of dissolving Gary Sanchez Productions, McKay was developing a series for HBO, and he decided to recast the coveted role of Los Angeles Lakers’ former team owner Jerry Buss from Ferrell to John C. Reilly, which apparently did not sit well with Ferrell.

“The truth is,” McKay told the magazine, “the way the show was always going to be done, it’s hyperrealistic. And Ferrell just doesn’t look like Jerry Buss, and he’s not that vibe of a Jerry Buss. And there were some people involved who were like, ‘We love Ferrell, he’s a genius, but we can’t see him doing it.’ It was a bit of a hard discussion.”

“I should have called [Ferrell],” he continued, “and I didn’t. And Reilly did, of course, because Reilly, he’s a stand-up guy.”

When they had the final phone call to split up the production partnership, McKay told Ferrell, “‘well, I mean, we’re splitting up the company,’ and he basically was like, ‘yeah we are,’ and basically was like, ‘have a good life.’ And I’m like, ‘F––k, Ferrell’s never going to talk to me again.’ So it ended not well.”

McKay hasn’t heard from his old partner since, not even through e-mail.

“I should have just done everything by the book. In my head, I was like, ‘We’ll let all this blow over. Six months to a year, we’ll sit down, we’ll laugh about it and go, ‘It’s all business junk, who gives a s––t? We worked together for 25 years. Are we really going to let this go away?’” McKay shared.

McKay recognizes that his old friend took things a lot harder than him, “as a way deeper hurt than I ever imagined, and I tried to reach out to him, and I reminded him of some slights that were thrown my way that were never apologized for.”

Ferrell, 54, did respond to the Hollywood Reporter back in October about the situation, though his reasoning seemed to center on potential project differences.

“Adam was like, ‘I want to do this, and this, and this’,” said Ferrell. “He wanted growth and a sphere of influence, and I was just like, ‘I don’t know, that sounds like a lot that I have to keep track of.’ To me, the potential of seeing a billboard, and being like: ‘Oh, we’re producing that?’ I don’t know... At the end of the day, we just have different amounts of bandwidth.”