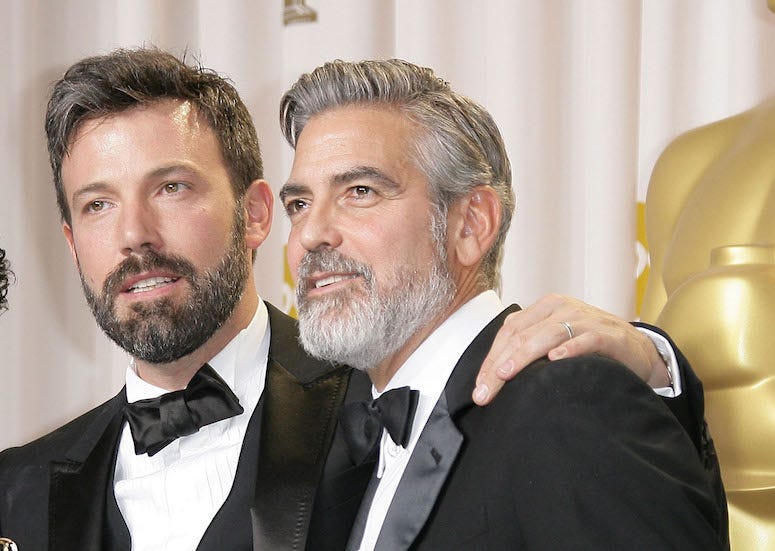 By nearly every account, it was not a good movie.  The Batsuit had nipples, after all.

It was critically panned, and set the Batman franchise back until the release of Batman Begins in 2005. As the Caped Crusader, Clooney wound up taking the brunt of the negative feedback, which is why he had some sage advice for Ben Affleck when the latter decided to accept the role of Batman in 2016’s Batman v. Superman: Dawn of Justice.
Clooney revealed on The Hollywood Reporter’s Awards Chatter podcast his conversation with Affleck after the latter decided to accept the role. “I actually did talk to him about it. I said, ‘Don’t do it.’  It was only from my experience, which is, you know…” Clooney was gracious enough to acknowledge Affleck’s performance in the movie. “He did great, though.”

Clooney explained that working on the movie taught him an "important lesson" about the film industry.  Clooney said, "Schwarzenegger was paid, I think, $25 million for that, which was like 20 times more than I was paid for it, and, you know, we never even worked together! We worked together one day. But I took all the heat.  Now, fair deal; I was playing Batman and I wasn’t good in it, and it wasn’t a good film, but what I learned from that failure was, I had to rethink how I was working. Because now I wasn’t just an actor getting a role, I was being held responsible for the film itself."