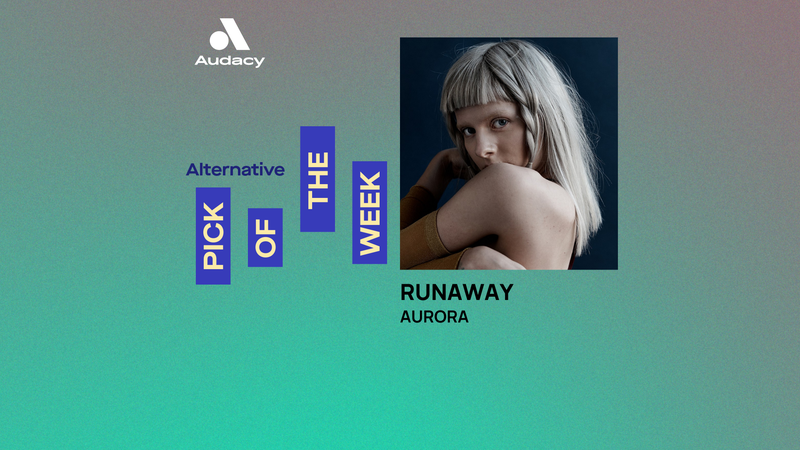 This week’s Audacy Alternative Pick of the Week is Aurora's "Runaway."

“Every time I make an album I feel like I know why I’m here,” smiles beloved-to-millions singer, songwriter and omnipresent pop enigma Aurora. “There are so many dark forces roaming around the earth but music can be such a beam of light, if you allow it to be.”

In a world so beautifully overrun by multifaceted pop artists, Aurora leads the pack. Admired by many of her peers — from Billie Eilish (who has credited her career inspiration to Aurora’s hit “Runaway”) to Troye Sivan, Katy Perry, Shawn Mendes and Doja Cat who was so moved by Aurora’s song “Exist for Love” that she cried — there’s a strong case to be made for Aurora being your favorite popstar’s favorite popstar, but despite such weighty co-signs her appeal is far from confined to the upper echelons of pop. You know Aurora, even if you don’t know Aurora. So yes, that was Aurora’s face beaming out into the darkness during the Chemical Brothers’ 2019 Glastonbury headline slot, but yes that was also Aurora’s voice on the 2015 John Lewis Christmas ad. There she was at the 2020 Oscars, performing her contribution to Frozen 2’s pivotal track "Into The Unknown," but there she also was at Coachella and at Lollapalooza, and across all those US talk shows and, well, you get the idea. “I suppose I am a diverse human being,” she laughs. “But then, I think all people are, deep down. It doesn’t make sense for me to wonder whether something ‘fits’: I just love creating and I’ve never tried to calm any of my sides down. I just do what I want. I’m like an animal sometimes — to be honest most of the time I relate to the animals more than humans.”

It’s hard to believe Aurora’s success to date is not the result of some meticulously-planned grand design. In fact, it happened quite by accident. When a local performance was posted online Aurora, still just 15 years old, was tracked down by an impressed management company, who asked if she wanted to be an artist. Her response was instant: no. “I didn’t see any point in becoming an artist; that’s not that was driving me,” she remembers. But when she realised she could become an artist without jettisoning her individuality, her independence or her strength of spirit, that no turned into a yes. And since 2015 that yes has turned into platinum discs, a million album sales and a billion streams and she’s not stopping there.