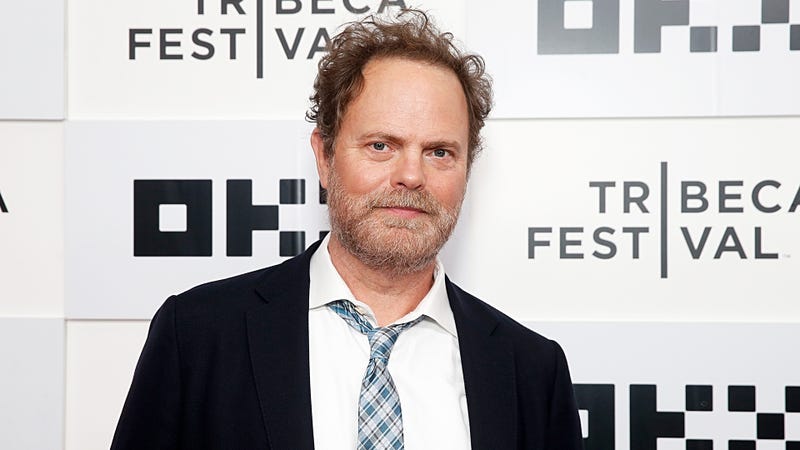 It's more than just bears, beets, and Battlestar Galactica when The Office star Rainn Wilson (Dwight Schrute) and Literally! podcast host Rob Lowe get to chatting!

On today's episode, you'll find out how The Office was almost canceled before it truly took off, Rainn and Rob's approach to acting for comedy vs drama, and what updates would be added to a second edition of "The Bassoon King," Wilson's illustrated memoir about growing up geeky.

Imitation is the sincerest form of flattery. The Office is on all day.

With nine seasons and 201 episodes that you've likely already binged numerous times, it could be quite hard to fathom that one of the most beloved television series of all time, The Office, was almost dead on arrival before its third season.

In the beginning seasons, The Office was not necessarily a ratings success, however, there was a ton of buzz surrounding the show from viewers. "It was a really interesting thing," says Rainn. "For the first season, we got terrible ratings, and the first part of the second season was really, really bad. We were on the verge of cancelation month after month. Then, very slowly in the second season, we began creeping up the ratings roster, and then all of a sudden we were nominated for an Emmy -- and then we were good to go at that point."

"We were the number one comedy on NBC, always, no offense to Parks and Rec," Wilson says, "but when you looked at the shows, we were like number 37 of all the shows." Doing a deeper dive, Rainn says the suits in charge realized that "college kids and rich people" were watching, "so we became a very valuable audience to them."

Later on in their chat, Rainn says he's open to figuring out a way to bring more content from The Office to fans, without walking the treacherous path of a reboot. "I don't think anyone is that interested in that. Also, we're so much older... All people are gonna see when they see us," he says, "is 'god, they've aged!' And it's not gonna be as funny."

Although he does have a brilliant idea: "There was a script that I found that we wrote for season one and never shot, called 'Pet Day,' and it was people bringing their pets to work. It never got greenlit, but it's the only extra Office script that never got shot. I would love to do a reading of 'Pet Day.' We could do a live stream, charge people $10 to come listen to the original cast read 'Pet Day,' and give the money to charity."

Got a question for Rob? Call the voicemail at (323) 570-4551. Yours could get featured on the show! Literally! With Rob Lowe -- now streaming on Audacy -- "is literally a podcast where people I love, admire, and know well will be in a safe space to really let their hair down (assuming they have any). I will cover the thoughtful to the extremely random. So join me and my guests from the world of movies, TV, sports, music, and culture for fun, wide-ranging, free-wheeling conversations." - Rob Lowe

Listen to more of your favorite music on Audacy's all-new stations like Wake Up and Rock, ALT Roots, Conscious Hip Hop, Let's Get Social, K-Bops, Don't Metal In My Affairs, Collabornation, and Audacy New Country -- plus check out our talent-hosted Ed Lover's Timeless Throwbacks and Kevan Kenney's Music Discovery!