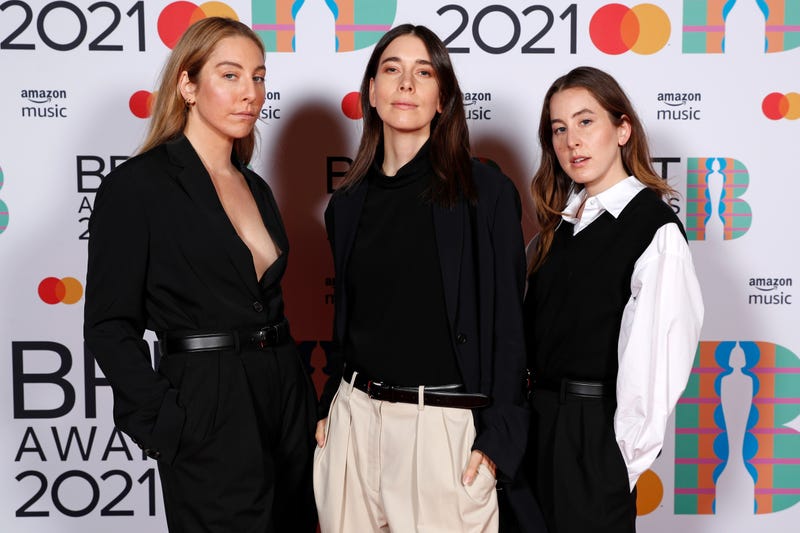 Last Hanukkah, HAIM gifted us with a topical rendition of The Waitresses’ “Christmas Wrapping, covering all the 2020 things, like vaccines, The Queen’s Gambit, and their monumental GRAMMY nomination, in their song “Christmas Wrapping 2020 (all I want for christmas is a vaccine).” This year the sister rock trio has gifted us with a second year of “haimukkah,” eight nights of gifts for fans specially picked by Danielle, Este, and Alana.

And as a Hanukkah gift to you from Audacy, we’ve created the ultimate collection of Hanukkah songs to make your festival of lights just a little brighter. From all of HAIM’s best festive tracks to songs from Idina Menzel and Neil Diamond, the Festival of Lights exclusive station gives you plenty of options for the holidays and ensures that we aren’t drowning in Christmas music all season long.

The sisters of HAIM kicked off “haimukkah” with a handful of giveaways. On the first night, one lucky Instagram winner won a Ludwig Drum set, the second night Alana gave away tickets to her new film, Licorice Pizza, and the third night included the chance to win Este’s, Fender Bass.

On the fourth night, the sisters called upon us to give a gift. In Jewish culture, there is always a tradition to give back, called Tikkun Olam, a means of repairing the world. Following their Jewish roots, Danielle, Este, and Alana asked fans to donate to Planned Parenthood, specifically keeping in mind that the Supreme Court has been hearing oral arguments this week that could change the landscape of abortion rights across the United States.

On Thursday, the fifth night of “haimukkah” the band delivered a brand new version of Adam Sandler’s famed “Chanukah Song.” HAIM’s take on the song spotlighted other famous Jews and ended with a big surprise. Singing, “guess who eats at the famous Canters Deli/ Rashida and Kidada Jones/ Eugene and Dan Levy,” the artists finished their cover by teasing a new tour…possibly the best gift any HAIM fan could receive.

With only two more nights of Hanukkah left, we hope that the Los Angeles natives close out Hanukkah 2021 with an official tour announcement and some fresh new tickets to snag! Keep up with all of “haimukkah” on HAIM’s official Instagram.