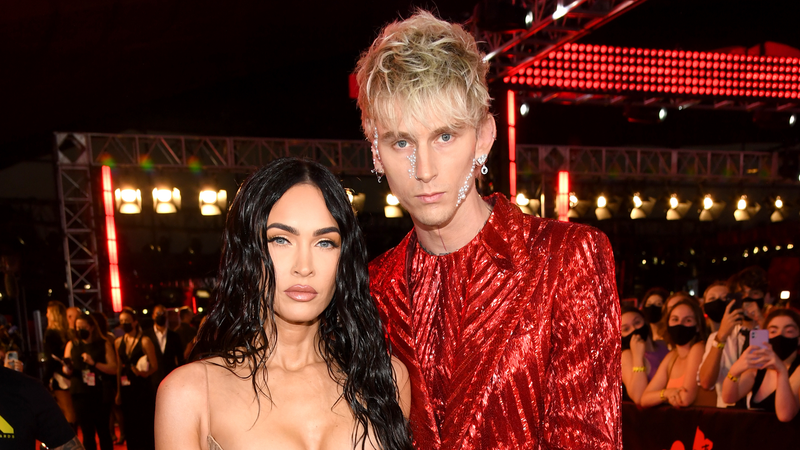 As you obviously already know, Machine Gun Kelly and Megan Fox are engaged. But did you know that aside from being a magnetic masterpiece, the ring Kelly custom created for Fox is actually made of thorns.

Thanks to another one of Megan's captivating captions, we already know that MGK proposed to his now-fiancé beneath the banyan tree where they once "asked for magic," and that once engaged, they proceeded to drink "each other's blood.” But, that's not why we're here.

In his caption, celebrating the engagement, MGK (real name Colson Baker) explained that he designed it with Stephen Webster to include the emerald (her birthstone) and the diamond (his birthstone). Representing "two halves of the same soul, forming the obscure heart that is our love.”

Well now, in a recent interview with Vogue, Baker shared a few more thorny details about the ring. "It’s a thoroughbred Colombian emerald, with no treatment. It was just carved into the teardrop, straight out of the mine. And the diamond was directly from Stephen.”

"The concept,” which Colson had already shared with the world “is that the ring can come apart to make two rings.” Explaining that “when it’s together, it’s held in place by a magnet. And then it forms an obscure heart.”

However, he went further, to newly divulge, “and you see this right here? The bands are actually thorns. So, if she tries to take it off, it hurts.”

When the interviewer noted, "that's very nice," because what else do you say in that particular situation, MGK’s response was of course very on brand, simply declaring, "love is pain!”

While painful engagement rings aren’t for us, we’re extremely here for Megs and MGK as a couple, and fully support anything these twin flames do.

Including their choice to post the big moment on social media, which as Kelly explained was methodical. “We released it to control the narrative. As opposed to someone just catching a weird cell phone picture of a ring on our hand and being like, whoa!”

Telling the fashion magazine at the afterparty ahead of his collaborative menswear show with Dolce & Gabbana, “but yeah, I didn’t expect it. I just recorded it on my cell phone. And it wasn’t like we had photographers or anything. It was just like me setting my phone against a cup.” As for Fox as she revealed she “[doesn’t] really look at social media,” and was seemingly unaware of the craziness surrounding the couple’s engagement.

Love that, and as long as she keeps those bathtub time stories and beautifully bewildering captions coming her lack of scrolling and indifference to keeping up with the goings on of social media is a-okay with us.