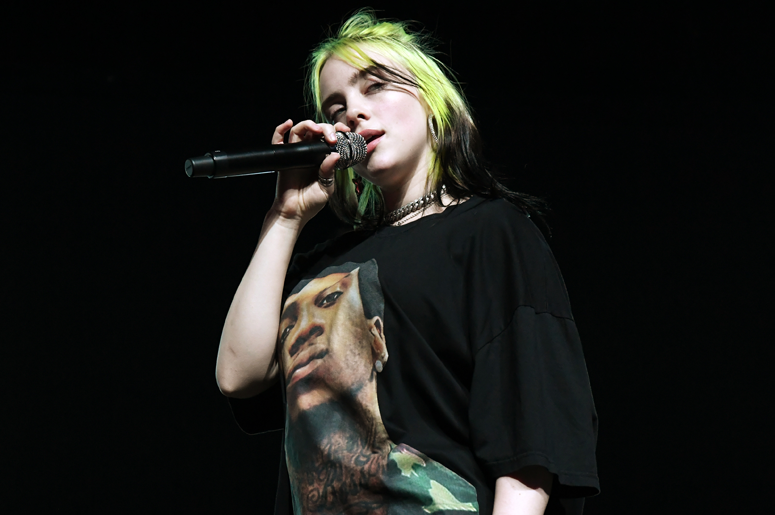 When you actually think about it, Billie Eilish’s rise to fame wasn’t that long ago. And with her intentionally oversized clothing and reasonably private demeanor, the only insight we get into her life is through her music… well that is until now.

Billie's documentary, The World's a Little Blurry, which shows you more or less everything you want to know about the her, dropped on Apple TV+ Friday February 26. The R.J. Cutler directed doc gives fans their first intimate look into the inner workings of Billie’s life and her rise to fame. From her close relationship with her parents, and working on music with her co-writer and producer brother FINNEAS, to her shining a light on her up until now completely unknown relationship with songwriter and rapper Brandon Quention Adams, professionally known as 7: AMP, whom Billie calls “Q."

As we ourselves are fans, some of the moments featured we obviously knew about, like her pre-teen obsession of Justin Bieber, which as we now know at one point her mother considered taking her to therapy to deal with. Also previously known is the undeniable fact Billie absolutely slayed at Coachella, where she actually met Justin for the very first time, which again as fans we already knew.

However, in the doc we get insight into those things along with many others that we would have never known about otherwise, the inmate moments that until now we were blissfully in the dark about. All of which added up, to candidly explain how and why Billie is who she is.

“When I was, like, 12 … that was like my first love,” the singer, now 19, says during a radio interview in the new documentary. “I literally remember sobbing into a pillow because I thought, ‘I’m never gonna feel this way about anyone [else],’ Eilish says of Bieber. “I literally was terrified that when I got a boyfriend when I was older that… he won’t compare.”

After her Coachella set, which Billie was widely praised by fans and critics alike, Eilish seemed less than pleased with her performance. Looking for solace speaking to Q on the phone she asked if he could come see her, to which he apparently replied, "I'll try.”

Moments such as these, show Billie’s struggle to manage her busy and demanding schedule, along with her personal life and those she loves in it, added by Qs “lack of effort,” are all factors that ultimately lead to the end of their relationship.

"I just wasn't happy. And I didn't want the same things he wanted and I don't think that's fair, for him, I literally was just like, 'Dude, you don't even have enough love to love yourself, you can't love me. And you don't. Like, you think you do.’" That very night Eilish cried while performing "I Love You," a heartbreak ballad from her 2019 album.

The doc also goes inside the making of Eilish’s debut album, 2019’s “When We All Fall Asleep, Where Do We Go?,” with FINNEAS. Who actually surprisingly revealed that “Billie hates writing songs in general.” And Billie backed that up, “Every single time I’ve written a song that I actually like, I’ve hated the process,” she says. “It tortures me.”

As for the darkness of her lyrics, Eilish tells one interviewer, “People are always like, you know, ‘It’s so dark. Like, have happy music.’ I’m like, ‘Well, I’m never feeling happy, so why would I write about things I don’t know about?’ I feel the dark things.”

Toward the end of the film, she reveals just how dark things have gotten. “To be honest with you, I didn’t think I would make it to this age,” says Eilish, who began struggling with depression after a serious hip injury forced her to stop dancing at 13. “I was, like, 14-15. I had razors hidden in places, and I had Band-Aids hidden in the little corner of my room. And I always had Band-Aids on my wrists. I was literally locking myself in the bathroom and making myself bleed ’cause I thought I deserved it.”

While not every moment is happy, they are in fact true, depicting a sincere and candid portrait of Billie’s life. Pieced together they show everything from, Billie hanging out at home with her supportive and might we add very cool parents, Billie at times jovial, acting like a teenager, as she should. Billie passing her driving test and getting her dream car, a black Dodge Charger, Injured splint-wearing Billie complaining that her body is “broken” after she sprains her ankle during the opening moments of a concert in Milan; Billie meeting Katy Perry, who tells her “It’s a weird ride,” in regards to fame. Billie recording “No Time to Die” on the road like a last-minute school assignment, and oh so much more. But to find out you’ll have to watch it for yourself.