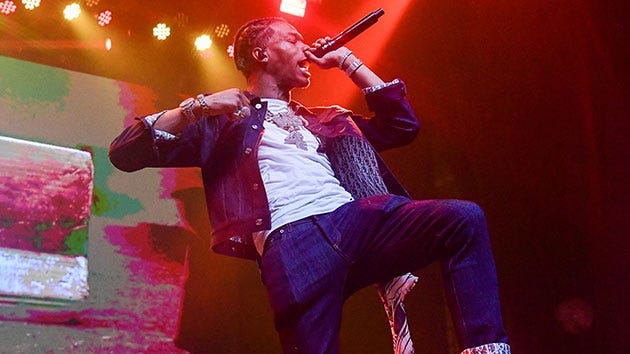 With his new album My Turn, Lil Baby feels he's releasing his "best work to date." He tells the New York Times that he views rap as a "reflection of his real life" -- though he says he'll no longer rap about drugs, and will never return to prison.

My Turn follows Lil Baby's 2018 debut album Harder Than Ever, and boasts a 20-song tracklist that features Gunna, Future, Lil Uzi Vert, Moneybagg Yo, Young Thug, and Rylo Rodriguez. The album includes the singles "Woah," "Sum 2 Prove," and "Catch the Sun" from the "Queen & Slim" soundtrack.

Ironically, the rapper's career took off while he was serving two years in prison on drug and gun charges. When he was released in 2017, his 2015 Perfect Timing mixtape had kickstarted his success.

"Whatever I had going on [on the streets], it came to an end at the time when I started to move up rapping," he tells the Times. "But I thank God that it happened like that, because I got more focused on rap and that’s how I became what I am today."

The Atlanta rapper also shared he never saw himself being anything but "big-dog dope boy."

"That’s why I ain’t got no tattoos, because I always knew I was going to run my money up, and I was going to have to go sit in front of some people to do something with my money," he explains. "And I didn’t want them to look at me like a dope boy. I had to keep my appearance straight."

In the interview, he talks about his dreams of owning his own record label, being a better man for his kids, and ridding himself of his "defensive shell."

My Turn is available everywhere today.