Do you want yourself or a friend to be highlighted as KYW Newsradio's Philadelphia Sports Fan of the Week? Click here.

PHILADELPHIA (KYW Newsradio) — Eagles fans are known for being some of the toughest in the NFL. They cheer, boo, shout, heckle and — for one fan transplanted to Southwest Florida — stand in extremely dangerous winds as a hurricane barrels toward home.

"I thought I was gonna just get swept away," said 47-year-old Gabe Ferraro, a Pennsauken and South Philadelphia native who lives in Cape Coral, Florida.
Wednesday morning, as Category 4 Hurricane Ian was threatening up to wreak havoc on the southwest coast of the Sunshine State, Ferrero went outside in shorts and a T-shirt. Rain appeared to be coming in fast and sideways.

For mere seconds Ferrero dared Mother Nature, holding up a big, green Philadelphia Eagles flag and letting the incredible wind open it like a sail.

Just in case I don’t make it. Go birds 🦅

'Southwest Florida is gonna get reshaped'

Ferraro's stunt is not one recommended by meteorologists or emergency management experts. Based on the real risk of serious consequences, they urge the opposite.

And as soon as Ferraro went back inside, it became clear why.

“The power lines started falling down. Trash cans started flying. It was insane. I've never experienced anything like that," he said.

Ferraro, who spoke with KYW Newsradio Friday morning over spotty cell phone service, said the eye of the storm went over his house Wednesday.

"I paced inside my house," he said. "For nine hours straight. I couldn't sit down because I felt the roof was coming off."

The wind that ripped through his town held at a consistent 138 mph for six to eight hours, he learned from radio reports. 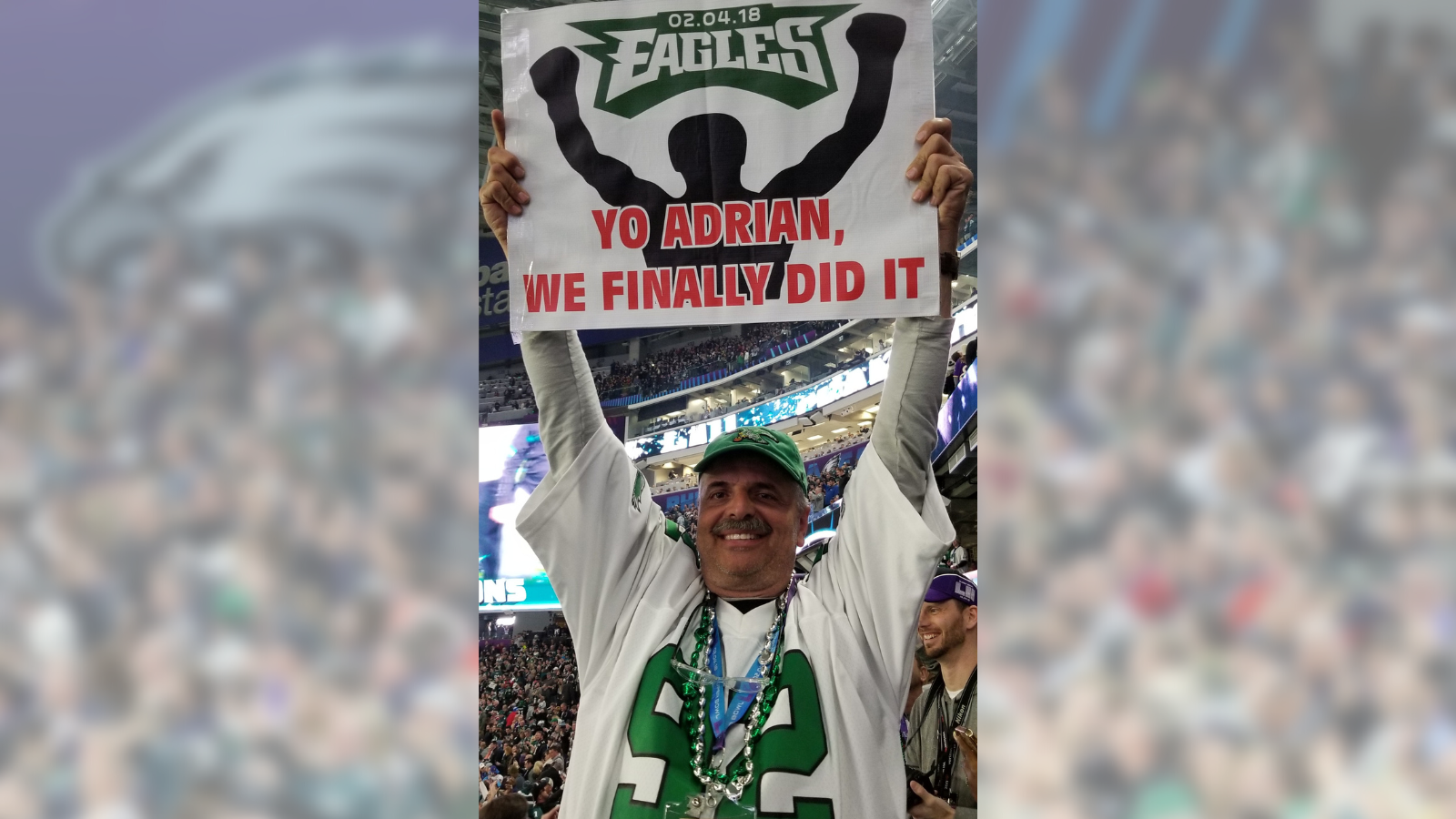 Ferraro was fortunate, and not just because the hurricane didn’t carry him away like a kite. Much of his part of the state was decimated by what Gov. Ron DeSantis called a "500-year flood event" leaving a path of death and destruction.

Ferraro said the shingles were torn from his roof, and his fence is gone, and his house started leaking, but he and his family are okay. He can't say the same for many nearby residents who got worse. He said he saw cars go through homes, utility poles burn down houses.

“Southwest Florida is gonna get reshaped. No doubt about it,” he said. "It is really bad."

Ferraro's 78-year-old mother, Jill, lives with him in Coral Cape. He said she moved in with him after his father died from COVID-19. 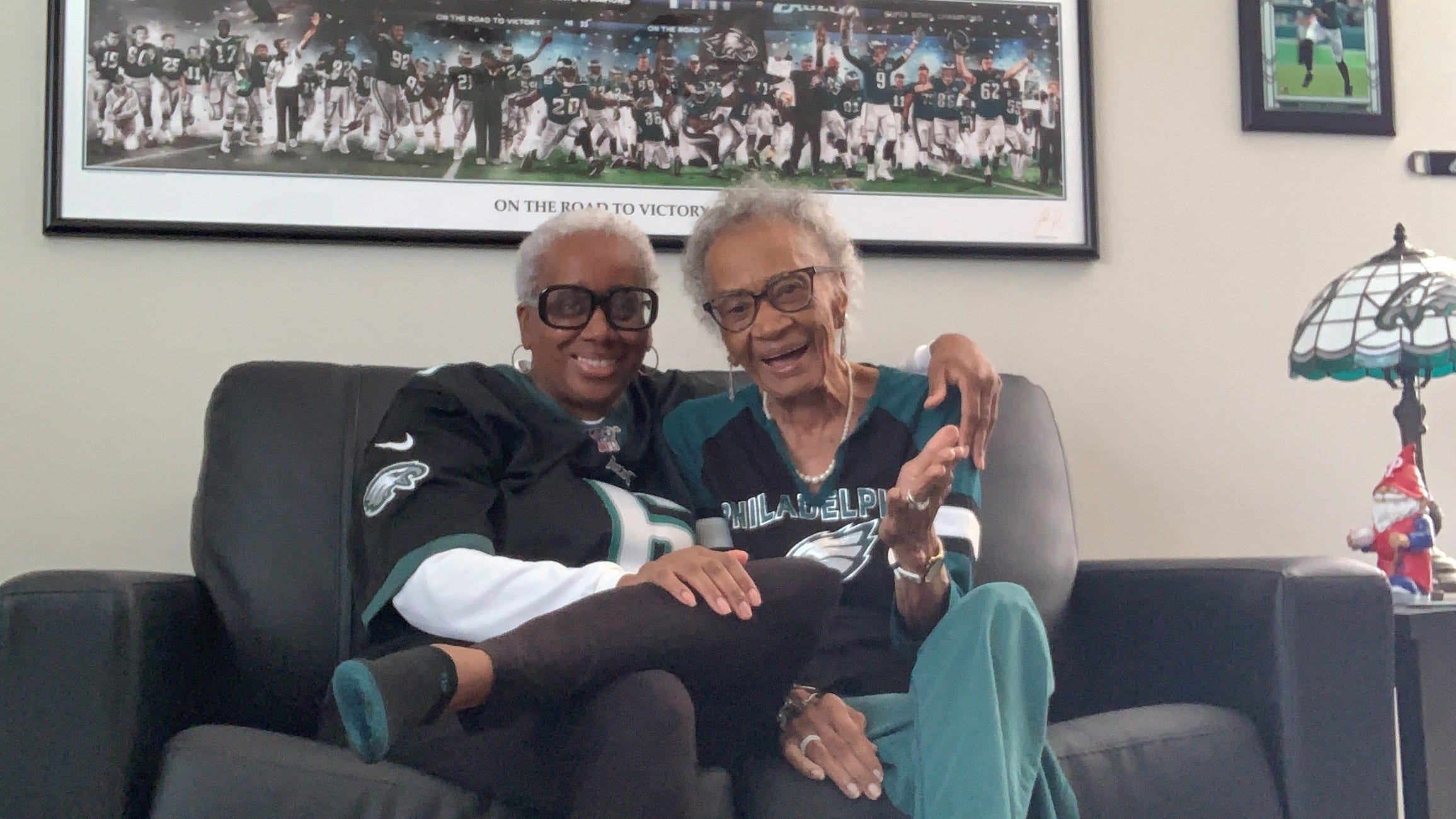 Internet sensation at 88: This Eagles fan keeps dancing through life

Jill has been a diehard Eagles fan her entire life. She and her husband were longtime season ticket holders. Even Ferraro’s name is derived from the Eagles.

Ferraro said his mom told him that inspiration struck when she was pregnant at Veterans Stadium at an Eagles game in the 1970s — “I'm gonna name my son after this quarterback.”

That quarterback was Roman Gabriel, who played for the Eagles from 1973 through 1977. Evidently, Ferraro’s brother didn't want his mom to name the baby Roman, so she went with Gabriel instead.

On Wednesday, as the storm struck, Jill was the only one in the house with her son. He told her “You're gonna have to go outside and hold the phone while I run out in the middle of the street and do this video,” he said. “And she did it like a rock star.”

She said “You're crazy. But let's do it,” Ferraro said. “She toughed it out.”
Ferraro did video to echo Lane Pittman, a Jacksonville native who has made a name for himself posting videos standing in major storms with an American flag.

Coincidentally, Pittman is a Jaguars fan — the team the Eagles are hosting this weekend.

This is an L just like it’ll be on Sunday #GoJags #dtwd https://t.co/QSkwgLadxh

Promoting the Philly life down in Florida

Ferrero says he didn’t set out to be famous, but he appreciated the reaction to his video — especially from former Philadelphia athletes. The phone signal in Florida has been so bad, family and friends were the ones who broke the news to him.

Sports aside, it’s clear Ferrero loves to promote the Philadelphia life in Florida. He ran a bar, which he lost because of the pandemic, but his niece helped him bounce back. They started a food truck business, Double Dee's Munchies, which he says pumps out about 200 award-winning cheesesteaks, using ingredients from Philadelphia and New Jersey, in a three-hour span.

This weekend, Ian be damned, Ferrero says he'll do whatever it takes to see the Eagles play.

"If I got to drive somewhere where there is power, I will,” he said. “If I can hear Merrill Reese on the radio somehow, it won't matter. I'll find a way. I'll always find a way."

CORRECTION: A previous version of this story misstated the category of Hurricane Ian.