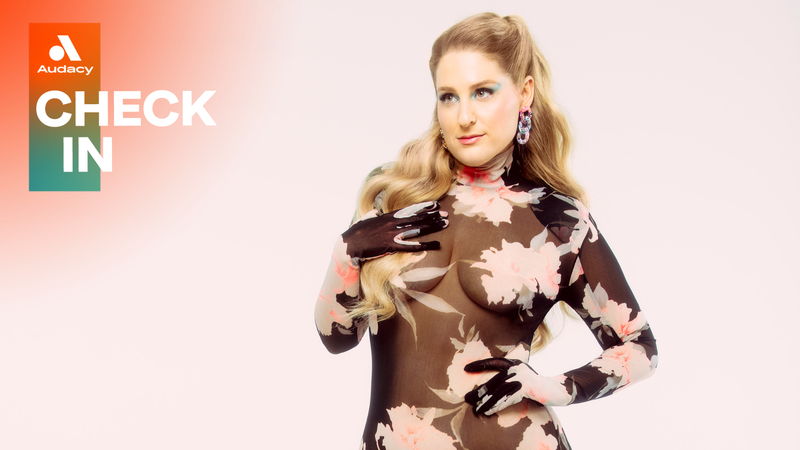 Bringing things to back her doo-wop roots with her brand new album, Takin' It Back, Meghan Trainor has been quite literally doing so with every vibrantly catchy track, and she joined Audacy’s Bru to talk all about it.

Currently killing it on all fronts with her music, on TikTok, with her podcast, as a mom and more, Meghan is seriously having a major moment.

When discussing her music Meghan shared, “My main focus in life is to make catchy, catchy music, y’know like stuff that haunts you at night. I have a lot of father’s that come up to me, that are like ‘I can’t get your song outta my head,’” she said pointing and shaking her index finger. Adding, “perfect, that’s what I want… I want it to be edible and delicious and easy to digest”

From “Don’t I Make It Look Easy” to “Made You Look,” Meghan has done exactly that, once again hitting the mark reminiscent to 2014 days with “All About That Bass,” and we’re absolutely living for it.

Revealing she came up with “Made You Look,” in one shower sesh, Meghan said, “I wrote the chorus” based off of a conversation she had with her therapist who wanted her “to look at myself naked more, and that’s hard to do y’know after having a baby.”

She continued, “but I wanted to write what my husband explains to me, like I’ll feel my grungiest and my ugliest and he’ll be like ‘you’re so beautiful,’ and I wanted to put that in a song and believe it. So I was like, I could wear the fancy clothes that they put me in as a popstar, but when I have nothing on my husband still looks and is like ‘damn girl!' — so that’s ‘Made You Look.’”

After getting into some of the song’s music video shoot nightmares and reshoot saves, Bru brought up the album’s other “amazing” tracks, including “Superwoman.” All about “mom guilt,” Meghan revealed she wrote it with Dan Wilson, “who wrote ‘Someone Like You’ by Adele — so I went in and was like you’re my ballad guy? He was like — Yes.”

"We were just chatting for two hours, he wanted to get to know me, and I was like honestly I keep getting interviewed and they’re like ‘Wow, you’re a Superwoman, you’re so confident and happy and successful, what’s it like?’ And I was like 'gee on my end it feels like I’ve been crying a lot,' and I was like I feel like I’m Superwoman that had a bad day… So I wanted to write that in a song." And according to Meghan, "we nailed it… and I hope all momma’s and momma’s-to-be hear it and know that they’re not alone.”

For all that, and to also hear what Meghan had to say about dropping her album the same day as Taylor Swift and Carly Rae Jepson, check out the entire interview above.