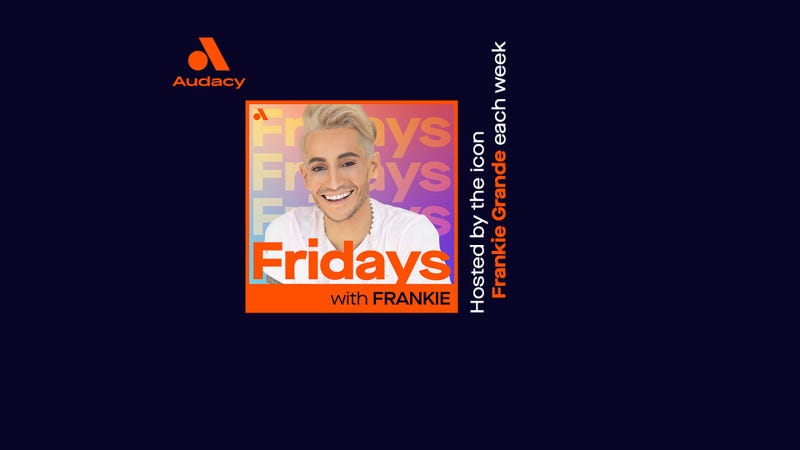 Fridays with Frankie, yes Frankie Grande, is here to deliver you conversations and kiki’s with some of your favorite Queer icons and allies — you’re welcome.

With Frankie’s main agenda, “to give a space where we tackle some big topics that aren’t necessarily examined through a queer eye and through a queer lens.” For his very first — Red, White and Q edition — episode, Frankie wanted to focus on the state of LGBTQ politics in this era of "Don't Say Gay."

As always approaching all topics with his usual upbeat attitude, Frankie is all about discovering ways for the queer community to come together and fight the good fight.

This week, he’s joined by former Biden campaign advisor and CHANNEL Q's Director of Political Programming, Ryan Basham, as well as President and CEO of GLAAD, Sarah-Kate Ellis. Also on the guest list, Brian Sims, first out and current State representative of Pennsylvania, the state that just passed a ban on conversion therapy. As well as the iconic Danica Roem, Virginia's first openly trans State Delegate.

Detailing what it was like to be  LQBTQ political advisor on the Biden presidential campaign, Frankie’s very first guest, on his very first episode, Ryan Basham revealed, “we focused on organizing LQBTQ people across the country… in a political sense,” meaning, “getting them out to vote.”

“It was a really exciting thing to be a part of, and all so felt really important, because the future of our country was at stake, and still is.” Currently focussed on mid-term elections, actively working on getting LGBTQ voters out there, admitting, “I don’t have a choice, it’s kind of a thing I just find myself doing every day I wake up, so.”

Stating that most American’s “are disengaged with politics, and just overwhelmed,” Basham implores that it’s not about understanding all of it, noting, “I do this full time and I don’t understand all of it, nobody does. It’s a one step at a time, one conversation at a time thing.”

Wanting to start the first season off with a bit of the unexpected, noting, “when people think Frankie Grande, they’re not like ‘wow, let’s talk Politics,’ but I do actually, I am very invested in what’s going on in our country… but sometimes I do feel helpless.”

President and CEO of GLAAD, Sarah-Kate Ellis, joined Frankie next to discuss her organizations role as acting as “global change agents,” whose “job is to make sure the LGBTQ community is included in every conversation that exists out there because we are in every family, we are in every work environment, we are everywhere. Not only to make sure we’re included but to make sure its accurate and fair,” combatting any negative narratives.

Evolving since its inception, Sara-Kate noted, “GLAAD was created during the AIDS crisis because the reporting… was demonizing our community.” Now, “culture and what we talk about as a society comes from so many different places… from social media… from gaming… from politics. So those are all places that GLAAD has had to make ourselves be a part of now, in order to make sure that our community is being represented properly and that our needs as a community are bring represented.”

Frankie and Sara-Kate went on to discuss the dangers on Monkey-pox and the defamatory homophobic slurs that have followed. As well as Victoria Alonso’s defiant and inspirational speech at the 2022 GLAAD Media Awards, and the measures GLAAD has taken as a direct result of both, plus so much more.

Brian Sims joined Frankie next, talking about the politics of Pennsylvania, the state that he is the representative of, and that currently just passed a ban on conversion therapy — well kind of.

After noting “the people of Pennsylvania are far more thoughtful about the politics, than the politics are,” Sims says can be solved in two ways, “electing new people,” and "engaging with elected officials.”

Sims discussed how his state is finally hopping on the bandwagon of banning what he calls conversion abuse, noting “there is no therapy about it.”

Pennsylvania’s Governor recently “strengthened the resolve that no state dollars, no tax dollars can go to anybody that’s doing conversion abuse.” So “can it still technically, legally happen until the Federal Court or the Supreme Court bans it?” The answer to that is yes, though the circumstances are limited, as it’s “harder than ever before for that to happen.”

Frankie’s final guest was Danica Roem, Virginia's first openly trans State Delegate. The two talked about everything from Danica’s debut book Burn the Page, in which she discuss all the details about her State Delegate race and then some. The duo also discussed not having to be what other people tell you your supposed to be, "you can be who you are and thrive because of who you are and not despite it.”

“I have either read or listened to all of the Outlander books, I was at Metallica like two weeks ago. I have a complete different life that’s not just about being LGBTQ…. We are multi-faceted people, we are not a monolith.” And while “who we are as far as our sexual orientation and gender identity does inform our world view… we have other interests other than debating bathrooms… we have other things about us that are also interesting.”

To listen to the entirety of all four of these interesting conversations, press play on the episode above.

Listen to CHANNEL Q and more on the free Audacy app