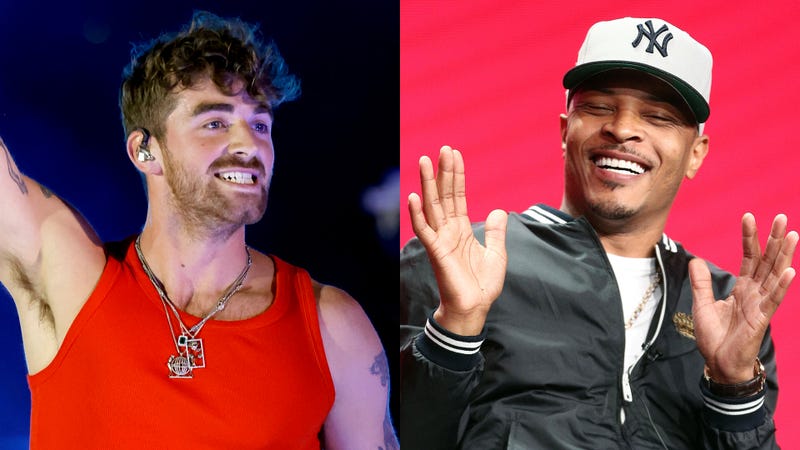 Following The Chainsmokers’ Drew Taggart’s recent claim that he was hit in the face by T.I. over a kiss on the cheek, the rapper is speaking out, confirming everything's all good after the smooch that led to a smack.

Anywhere can be a dancefloor if you try hard enough. Groove to The Chainsmokers and more, listen to Now Dance! on Audacy

In a video The Chainsmokers shared on TikTok, titled “When meeting T.I. goes wrong,” the clip first shows the duo at a nightclub alongside T.I. and few others. Taggart is heard saying, “T.I. just literally punched me in the face,” while going over the events on the car ride home.

“We’re in a vibe and I, like, gave him a kiss on the cheek – it was totally my fault,” Taggart said, with his bandmate Alex Pall heard laughing in the background.

Not offended or upset, Taggart accepted responsibility for T.I.’s physical reaction to the unwanted kiss. “First of all, T.I. is fully in the right here. I was like, feeling the vibes way too hard, and I kissed T.I. on the cheek, and he punched me in the face for it. It’s fully fine.”

Now T.I. has also  addressed the incident in an Instagram Live, calling it "a minor kerfuffle.”

"I have nothing negative to say, we just had to work through some stuff and we worked through it," T.I. said in the self recorded video. "We got to a much better place. I have nothing but good things to say about them. Good guys.”

He continued, "I think the most important thing to take away is afterward, we had a drink, we took a shot, and we moved on.”

T.I. went on to insist that he's still a fan of the band, explaining that he didn't want "sugar" from them and Drew's actions just went too far.

“Love The Chainsmokers, they make great music, you know,” T.I. said, before inviting the duo to appear on his ExpediTIously Podcast. "I would love to have you guys on ExpediTIously if you can find the time to just sit down and chop it up. I'd love to kick it with you if y'all got some time on your hands… Let’s catch a vibe."