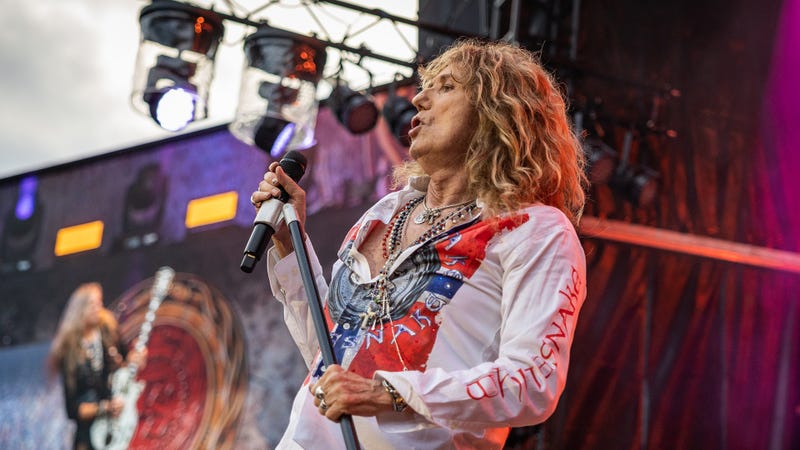 Following the cancelation of the last 11 shows on their 2022 European tour due to health problems affecting a number of the band's members, rockers Whitesnake have now pulled out entirely from their upcoming North American outing opening for The Scorpions and headlining shows as frontman David Coverdale continues to be treated for respiratory issues.

Listen to your favorite music now -- curated for fans, by fans -- on Audacy’s Lighters in the Air, Arena Rock, and more!

Whitesnake frontman David Coverdale made the announcement over the weekend, posting the news of their Rock Believer Tour cancelation along with an explanation on their social channels.

"It is with profound disappointment and a heavy heart that I must announce that Whitesnake will no longer be able to join The Scorpions on their US and Canadian tour due to my continued treatment for a persistent upper respiratory infection that affects my ability to perform," the caption reads. "This includes the cancellation of our own headlining shows as well."

Coverdale, who will turn 71 this September, also included a separate, personal letter to his bandmates and crew which reads: "My sincere apologies to my incredible Whitesnake band members... I couldn't wish for a more amazing, exciting, inspiring & thrilling band... Also our wonderful Whitesnake Crew of 2022... Our dear friends, The Scorpions... All the agents & promoters… & of course to YOU our truly awesome fans... I am deeply & profoundly sad to be unable to tour."

"While Whitesnake will no longer be on the tour, the Scorpions will be continuing on," the band's caption ends. "We Wish Our Good Friends, The Scorpions Every Success!!! We Wish You Well.”

Take a look at the upcoming dates for The Scorpions tour below and get ticket info right HERE.

Check out some of Audacy's all-new Rock stations like 80s Guitar, Rock N’ Road, Freedom Rock, The Canyon, Arena Rock, Wake Up and Rock, Masters Of Metal, IndustriALT, Don't Metal In My Affairs, Venom, and The Roots of Rock for those who crave the early days.