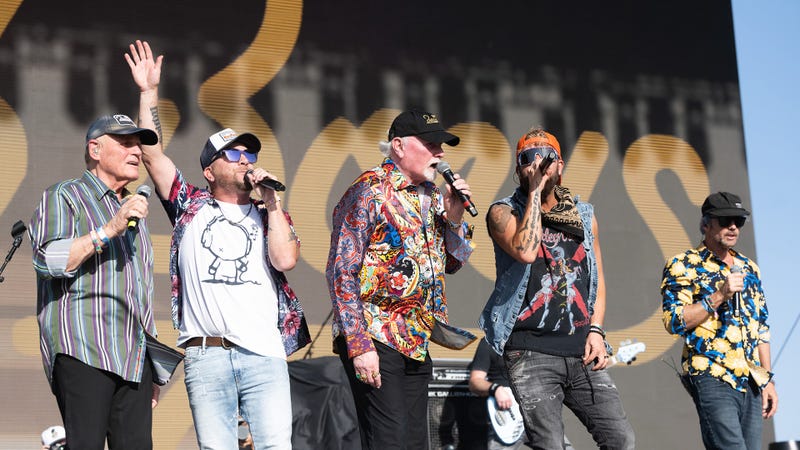 Chris Lucas and Preston Brust of LOCASH, and The Beach Boys' Mike Love and Bruce Johnston got around-round, they got around to giving a few details about their new collaboration and more with Audacy's Rob + Holly this week.

The bands both got together for LOCASH's 2022 feel-good single, "Beach Boys," which not only samples the classic "I Get Around," refrain, but also features the original songwriters, co-written by Lucas, Brust, and Love alongside Dallas Wilson, Jared Mullins, and The Beach Boys' Brian Wilson.

LOCASH knew they wanted to incorporate the well-known harmonies of The Beach Boys into the track, "but make it a Country song," says Preston. It was Mullins who first floated the title, and while that may have been "a little too on the nose," the lyrics that followed soon after kept the ball rolling in only one direction: "We knew we had to send this to The Beach Boys for approval."

Preston adds, "We sat there and dreamed that day, 'What if The Beach Boys hear this and like this; and then what if they hear it and like it, and actually want to sing on it?' Then the phone rings, and it's Mike Love, Dr. Love."

"I heard that song and said, 'well this is hooky; first of all it's 'Beach Boys,' so you know, it's self-promoting. What's so wrong with that?'" says Mike Love with a laugh. "I said, well the only thing I can think of is let's start with 'round-round, I get around,' and then they add the drinkin' down part... really well, actually -- they're very expert drinkers! It just came together beautifully, and its a summertime hooky hit. They're driving 'til the map turns blue, and they're gonna have a rum and Kokomo... it's all good... I don't think it's gonna be the theme song for Alcoholics Anonymous, anytime soon. Maybe Alcoholics Unanimous!"

Fans got a chance to experience the bands together at Stagecoach this year, performing their collab as well as a few other Beach Boys classics. "It was not only 'Fun, Fun, Fun,'" says Love, "but it was 'Kokomo' also... and they ended up with 'I Love This Life,' which is a great song, both Bruce and I were eager to sing on it, and add our harmonies to it and stuff. It was an awesome time... I was really amazed how many people sang along with us on both of our songs."

"I gotta tell you, when we sang 'Kokomo' together, I watched time stand still for three minutes," adds Preston. "That is a surreal moment when you actually watch time stand still. I don't know how many times that has really ever happened in my life, but 'Kokomo' was one of those moments."

Bringing the beach to Country music has been on Beach Boy Bruce Johnston's mind for a while now: "We've been talking about a Country recording one day, you know seeing Kenny Chesney, of 'Kokomo,' and now it's 30 years later and it's time for it to happen," he says. "So, I hope it's LOCASH doing a Beach Boys song."

"Sorry, Kenny," Preston jokes. "We broke the news... you heard it right there!"

Listen to the full chat with Rob + Holly + LOCASH + The Beach Boys above -- and kick off your weekend with Rob + Holly every Friday @ 7PM on your favorite Audacy Country stations. Plus, get your votes in now for the daily Top 7 @ 7 countdown!

Check out and favorite some of our all-new Country stations like Audacy New Country, Tailgate Crashers, Jake Owen's Tiki Tonk, Country Edge, and Katie Neal's Leading Ladies for the best from the female side of Country music.