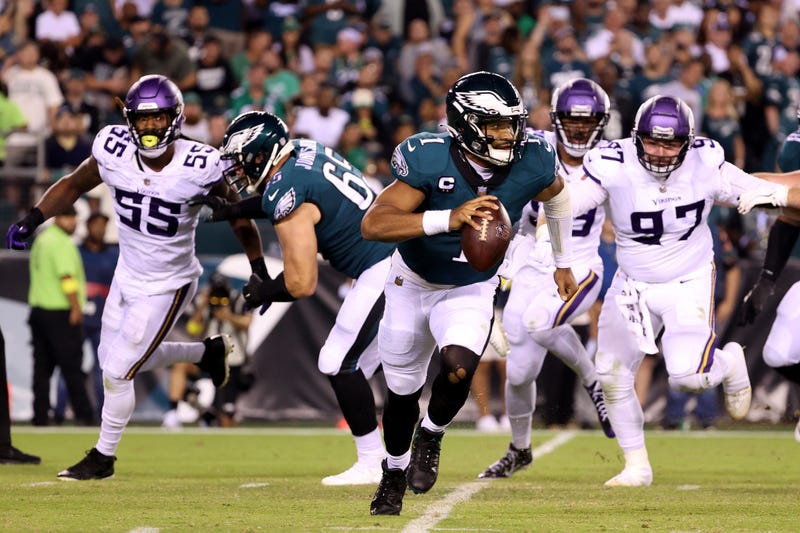 We're two weeks in, and top league analysts and experts are already reaching a consensus on how the 2022 NFL season will play out. But, we all know this never works out. So, it's a perfect time for this week's installment of ATG.

Slather the entire desert in Vaseline. America has decided the Eagles and Bills will visit Arizona for Super Bowl 57 in February. While it would be the greatest collection of fans in league history, only one half of that equation is accurate. Buffalo going to the Super Bowl. Philadelphia isn't there yet.

The Bills have been the "with the grain" Super Bowl pick all along. Now that their defense has caught up with their offense, they're terrifying. Von Miller said last night, following the blowout win over the Titans, that they have "an attitude of domination." All they needed was an attitude of competence, and they would've been fine. Now that Buffalo's defense is nasty, the rest of the AFC should tremble.

As of Tuesday, the Eagles are +450 to win the conference, per DraftKings, trailing only Tampa Bay (+300). Jalen Hurts ranks seventh in passing yards (565) and 10th in rushing (147). The offensive line could be the best in the league, and the defense tortured the Vikings. Now for the reality check.

They were facing primetime Kirk Cousins, whose No. 1 target on Monday was Eagles cornerback Darius Slay. And the Vikings still had a chance to get in the game late. We need to see coordinator Jonathan Gannon's defense hold up against an elite quarterback. He kind of got lit up by Jared Goff in Week 1, and last season, good quarterbacks ate up the Eagles defense. Need to see more before all of my crazy Philly relatives start searching for flights to Phoenix.

No. 2: Are we really writing off Tom Brady again?

I can't believe I'm reading about Tom Brady's lack of weapons and how he seems frustrated today. I mean, how many times are we going to write the "Brady is nearing the end" article? It never works out. Newly acquired slot receiver Cole Beasley's career resuscitation with the Bucs feels inevitable. And by the end of the season, Brady will be throwing to Mike Evans, Chris Godwin, Julio Jones, Beasley, and maybe Rob Gronkowski. That would've been a dream team in 2017. It's still good enough for Brady to fix this unit.

Meanwhile, Tampa's defense is reason for celebration. And even if Brady is bad all season long, Peyton Manning won his last Super Bowl with defense out in Denver. John Elway had a similar path. With everything that's going on, Brady can't possibly care about style points.

The ease with which league narratives instantly change on bizarre endings is staggering. The love for the Jets, Dolphins, and Cardinals after Sunday's wins makes no sense. The Jets score 14 points in the final two minutes against the Browns to win 31-30, and then, coach Robert Saleh is collecting receipts and Joe Flacco is... back? That win was 100-percent about the incompetence of the other team. And so the 2022 Browns motto is simple: “I thought you were covering that guy." Cleveland is going to set an all-time NFL record for blown coverages. The Jets get no credit.

The Dolphins trail 28-7 at halftime, and no one is worried? Scoring 28 fourth-quarter points against an exhausted and shorthanded Ravens defense isn't a sustainable approach. And now Miami is an AFC contender and Tua Tagovailoa was actually the right pick ahead of Justin Herbert? If Miami lost -- which they should've -- they'd be 1-1 and hosting the Bills. The same analysts promoting them would be panicking.

Finally, these Cardinals and Kyler Murray. This is your plan? Just let Murray run around for three minutes and hope the defense is comatose like the Raiders? Okay, that might work sometimes. And frankly, I want to see it. 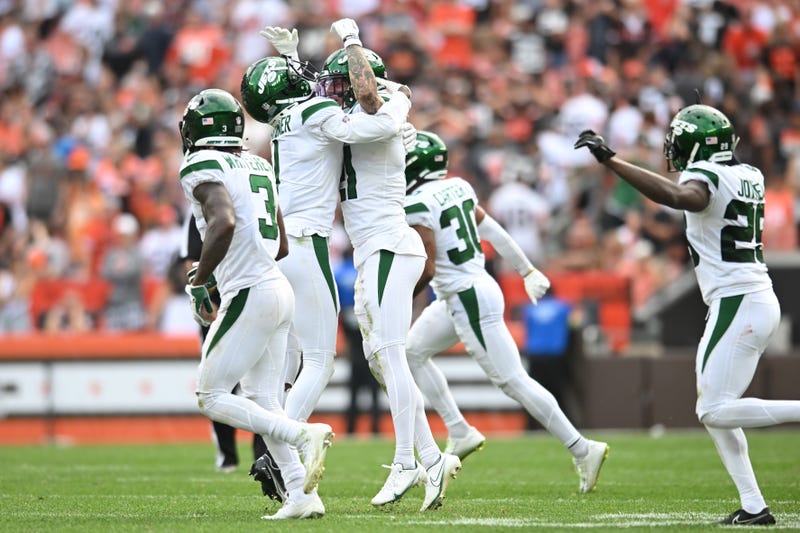 No. 4: In defense of Nathaniel Hackett

Broncos first-year head coach Nathaniel Hackett needs a friend. I’m here for you, buddy. Hackett has to be the most criticized 1-1 coach in league history. While it's true he looks completely lost, he's also a victim of the football news cycle. For most of the 100-plus years of NFL history, coaches got a chance to make mistakes and grow. No one blew up Weeb Ewbank for punting on a 4th-and-2 at the opponent's 43-yard line. Nobody went after Jimmy Johnson via social media when his Cowboys went 1-15 back in 1989. As bad at Hackett's early miscues are, he's still going to need decades to catch up to Andy Reid’s clock mismanagement issues.

I think the most important precedent for Hackett is fellow Civil War hero and Bengals coach Zachary Taylor. The Bengals were a ghastly 2-14 and 4-11-1 in his first two seasons at the helm, and then he reached the Super Bowl in his third. Continuity matters. Now, expectations are set higher for Hackett since the Broncos have Russell Wilson. But this team around Wilson has question marks. He was throwing to practice squad guys by the end of their 16-9 win over the Texans on Sunday.

Indianapolis could turn things around and win the flawed AFC South. But is this outcome in their best interest? The only reliable formula for long-term success in the NFL -- a decade's worth of playoff trips -- is to draft a great quarterback. The Colts are just recycling veteran signal-callers other teams didn't want, stuck in limbo.

The Colts haven't had many shots at quarterbacks recently. In 2018, they took Quenton Nelson with the sixth-overall pick and passed on Josh Allen at No. 7 and Lamar Jackson at No. 31. But, at the time, they still had Andrew Luck. So, QB wasn't even on their radar and Nelson is headed for a Hall of Fame career.

They're 0-1-1 overall, and still talented enough to compete. But fans shouldn't panic if they struggle, since the long-term future would be better served with a high draft pick and the arrival of a potential franchise savior.

No. 6: Maybe Carson Wentz wasn't the problem in Indy

The new Commanders quarterback is on pace for 60 touchdowns in 2022. Wentz is also on pace for 26 interceptions, so maybe this kind of projection isn't perfect. But the reason to be excited is Wentz' new targets. Beyond star wideout Terry McLaurin, they hit on first-round pick Jahan Dotson, and Curtis Samuel is healthy. Commanders halfbacks Antonio Gibson and J.D. McKissic can't really run the ball, but they're good pass-catchers.

So maybe this is just projecting fantasy football priorities on the real game. Washington's defense is struggling, which means more Wentz passing yards. Still, he could end up putting the kind of stats that'll get him paid… something his many critics didn't see coming.

Carson Wentz is the first player since QB starts were first tracked in 1950 to have 300+ pass yards and 3+ pass TD in each of his first 2 starts with a new team.#HTTC @Commanders

No. 7: Joe Burrow shares the blame

The Bengals' stud quarterback is on pace for 110 sacks. So far, the narrative has been that the offensive line is failing. And it is. But Burrow has to get rid of the football. Yes, I know he's trying to make a play, and that worked in last year's playoffs. Now that defenses have studied the Bengals offense and are focusing more on superstar receiver Ja'Marr Chase, Burrow's job is tougher.

Micah Parsons' signature play on Burrow this past Sunday -- when he overran him and then came back around for the sack -- was absolutely incredible. But Burrow had a chance to at least throw the ball away. These 0-2 Bengals are in crisis mode. If their offensive line is as bad as everybody says, which I doubt, Burrow has to adjust.

The lion is on the prowl 🦁 @MicahhParsons11

No. 8: 49ers offseason is going to be brutal

Jimmy Garoppolo will probably lead the 49ers to the NFC playoffs and kick off another six months of hand-wringing about Trey Lance's future with the team. And watch Garoppolo be just good enough for him to sign again on a medium deal with San Francisco, but not good enough to receive a massive contract someplace else. This franchise is going to be in this weird quarterback limbo forever. They tried to commit to Lance, but just couldn't do it. And now with Lance's season-ending ankle injury. they're going to be even more confused and drag us along as they head into the future.

No. 9: We know nothing -- Alabama quarterbacks

This is a great example of judging quarterbacks too quickly. Remember how ironic it was that Mac Jones was the best Alabama signal-caller in the league last season? Now Jones is the third-best? So, who's the best, Hurts or Tua? How about this: we have no idea and we're going to have to wait a few years. By then, we'll throw in Bryce Young and who knows what other quarterbacks.

It's hard for me to admit, because I'd take "Game of Thrones" over "Lord of the Rings" all day. But, in my nerd power rankings, "House of Dragons" is at the bottom. More like "House of Dragging Me Down," am I right? "Rings of Power" desperately needs editing and an acting coach for a couple of its primary characters, but at least it feels new.