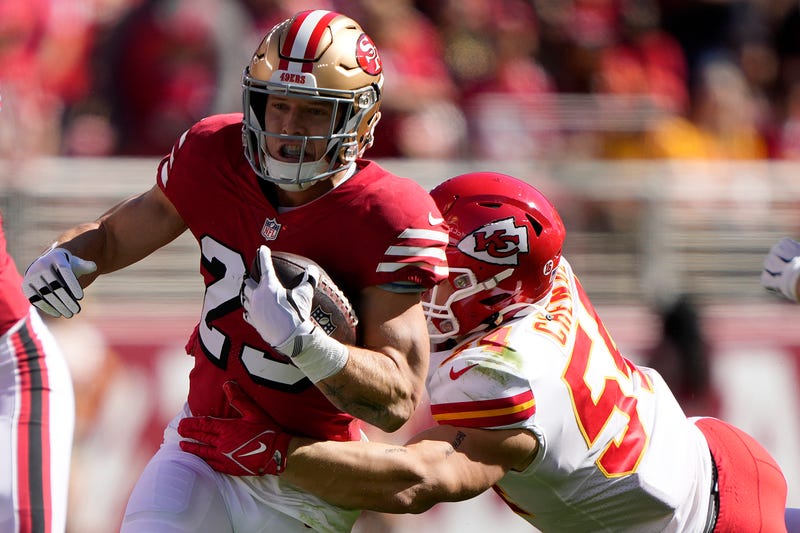 No. 1: The Year of the Backup Quarterback

Cooper Rush, Bailey Zappe, Taylor Heinicke, and P.J. Walker are a combined 8-2 in 2022. Central Michigan, Western Kentucky, Old Dominion, and Temple alums killing it against the NFL's best. Call it a fluke, if you want. But, in each case, the backup quarterback came in and gave life to a team that struggled with a starter who had higher expectations.

The Commanders were going nowhere with Carson Wentz and Baker Mayfield wasn't working with the Panthers. No surprise. That first-round label follows a quarterback throughout his career, and they get chances when they probably shouldn't. The undersized, under-recruited, under-appreciated quarterbacks don't get the same opportunities, but some of them turn into special players.

Earlier this week, when the Colts announced they were benching Matt Ryan for Sam Ehlinger, some saw it as waiving the white flag and tanking for a top draft pick. But, the way this season's gone, Ehlinger has a shot. Indianapolis desperately needs a quarterback that can move -- Ehlinger should cut down the number of sacks. More importantly, Ehlinger, a sixth-rounder in 2021, has the Rush-Zappe-Heinicke-Walker intangibles.

"This guy is special," Colts coach Frank Reich told reporters. "You all know it, everybody knows it. Talk to anybody in that locker room... He'll be ready."

Not sure everyone knew Ehlinger was special. But we'll take Reich's word for it, because this is the Year of the Backup Quarterback. Future Hall of Famers are struggling. Young first-rounders are flaming out. Time for the guys who no one thought had a chance to step up and make the most of their chances.

Every Monday, I walk into the Maggie and Perloff show -- 3-6 p.m. ET on CBS Sports Radio -- and shout that Aaron Rodgers is about to turn it around for the Packers. I've been wrong, and I almost gave up on the two-time reigning MVP too. But then he dropped the bizarre Zen-like façade on Tuesday, chatting on the Pat McAfee show, and hooked me back in. He came out and roasted the whole Packers team.

Every former player on television is ripping Rodgers for airing out his team on a podcast. Ideally, that should happen in the locker room. And players should probably handle their own business before ripping others. But, these sure are desperate times in Green Bay, and they call for desperate measures.

Rodgers didn't tell anyone to relax, or extol the virtues of mind-altering drugs. He's just snapping out of his theoretical phase and getting into action. Now, is Rodgers being a jerk? Definitely. Is he undermining his coaches? For sure. Somebody has to, in this case. Packers coach Matt LaFleur isn't creating any change, and time is running out.

The Bills should expect a different Packers team on Sunday night in Western New York. Rodgers has never been a double-digit underdog in his illustrious career. He's finished messing around and he's going to will this Packers team into competitiveness. Watch Rodgers' teammates play better, even if they do it simply out of spite.

No. 3: NFC stays strong against AFC

The Packers and Buccaneers' struggles have been framed as an indictment of the entire NFC. Just because they're disappointing teams, doesn't mean there aren't any good teams in the conference. The preseason narrative that the AFC is the far superior conference persists, despite evidence pointing to parity or a slight edge to the NFC. The NFC beat the AFC, 3-2 head-to-head, in Week 7. On the year, the NFC has a 14-12 edge in interconference games.

The AFC is top-heavy, with Buffalo and Kansas City. But, after that, there isn't one team in the AFC who anybody can say is definitively better than the large group of NFC contenders. Cincinnati? The Bengals lost to Cooper Rush and the Cowboys. The Ravens? They lost to the Giants. The Chargers? They just got beat up at home to the Seahawks, 37-23. Time to change the perception on several NFC teams. The NFC is wide open -- that doesn't mean it's inferior. 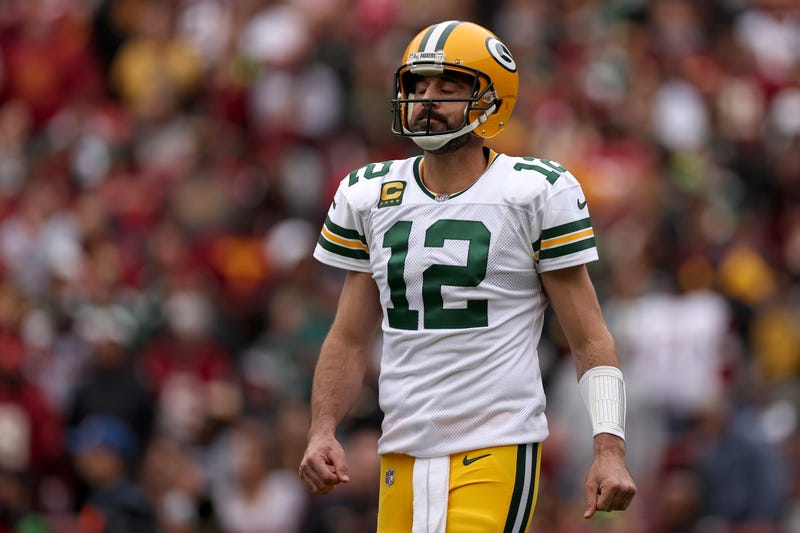 The 49ers traded their 2023 second-, third-, and fourth-round picks in 2023 and another fifth-rounder for star running back Christian McCaffrey. That's a lesser version of the Giants drafting Saquon Barkley with the second-overall pick, back in 2018. Former Giants general manager Dave Gettleman thought Barkley would help Eli Manning. The 49ers believe McCaffrey will help Jimmy Garoppolo this year, and hopefully Trey Lance next year.

But that's not how it works. These quarterbacks have to step up on their own.
It didn't happen for a late-career Manning, and there's reason to be skeptical about whether it'll work in San Francisco as well.

McCaffrey looked good in his 49ers debut against the Chiefs, running for 38 yards on eight carries and catching two passes for 24 yards. But he couldn't overcome a terrible red-zone interception by Garoppolo and a San Francisco defensive meltdown. And meanwhile, on McCaffrey's former team, Panthers fill-in running backs D’Onta Foreman and Chuba Hubbard ran for 173 yards in an upset win over the Bucs.

McCaffrey must have value. Smart teams like the Rams, Eagles, and Bills were reportedly interested in him. But any nerd in the league will tell you that teams shouldn't invest in running back. Maybe McCaffrey is different, but he has to prove it on a team that's now all-in on another deep playoff run.

Tanking is very real -- the Lions, Texans, and Panthers are all-in on finding new quarterbacks this coming offseason. They're currently the top-three teams in the 2023 draft order, with incentive to stay there. The next three teams at the bottom of the standings are the Saints, Browns, and Broncos. But all three of these teams traded away their 2023 first-round picks.

Now, these three teams have every reason to win late in the season and avoid embarrassment. Their coaches, if they don't get fired mid-season, are fighting for their lives and won't turn to the young guys. And these front offices won't ask them to. There's nothing in it for them. Motivation is everything in the final weeks of the season. At some point, New Orleans, Cleveland, and Denver will go on a run, while the teams behind them take their foot off the gas.

Right now, the Texans have the Nos. 2 and 4 picks. The fourth pick is from the Browns, and it could fall. But if they end up with a pair of top-10 picks in 2023, they stand to hit on what could be a winning formula next spring. Houston will have a chance at Alabama edge Will Anderson with a top-three pick, and then get the quarterback with the second pick.

Let's say, for argument, that quarterback is Hendon Hooker from Tennessee. After two strong drafts in a row from general manager Nick Cesario, Houston has a chance to quickly rebuild and reconstruct its roster with the two-most important positions in the draft.

No. 7: Age is just a number for Hendon Hooker

The Heisman hopeful is having a Joe Burrow at LSU-like season, but his age has come up as a red flag. He'll turn 25 in January. This means he'll be old by the time his NFL rookie deal is up. But, in a league where these quarterbacks are well protected and play into their 40s, teams probably won't be scared off. Hooker may be older, but they could get a decade out of him if he's good. 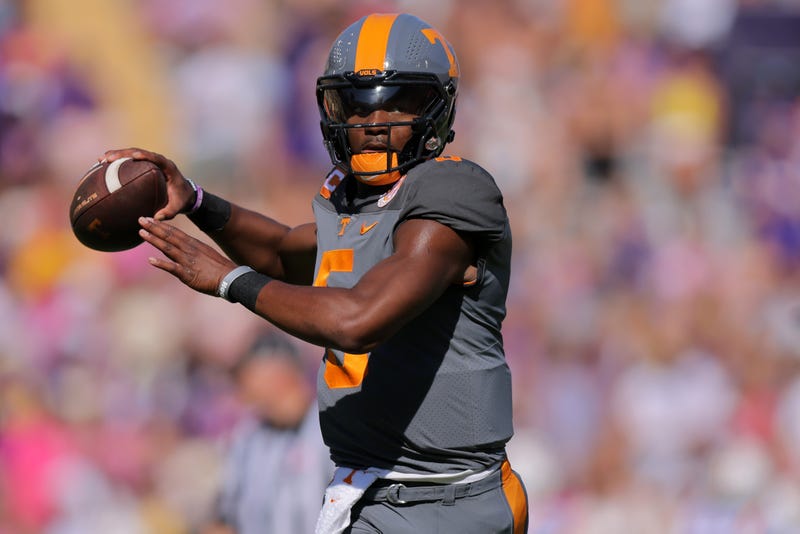 No. 8: Beware of Steelers receivers

Chase Claypool is a curious name to see on the trading block. Why would the Steelers give up on a talented young wide receiver? Maybe the emergence of rookie wideout George Pickens has something to do with it. But Claypool still seems like a valuable asset for rookie quarterback Kenny Pickett.

Advice to other teams: stay away. Pittsburgh is better at evaluating receivers than everyone else. If the they don't want him, there must be a reason. Just like when they shipped Santonio Holmes to the Jets for a fifth-round pick in 2010, or Martavis Bryant to the Raiders for a third-round pick in 2018. Neither worked out. A couple players did succeed elsewhere, as Emmanuel Sanders and Plaxico Burress produced some good seasons. But there were also guys like Mike Wallace and Sammie Coates who faltered.

Claypool looks the part of a star. He's 6-foot-4, 238 pounds, and just 24 years old. But this organization, even with its turnover at general manager, has wide receiver brilliance in its DNA. Thus, Steelers wide receivers should be avoided at the deadline.

No. 9: Jags-Broncos is game of the year

The NFL has mastered the formula of sending two struggling teams overseas and creating an unpredictable mess. But this matchup of 2-5 teams could be the biggest disaster of all. The Broncos are in a free-fall. The Jags have talent but are too mistake-prone. So, the final result is obvious: a field-goal attempt gone hilariously awry -- like it did in the Saints-Vikings clash in London earlier this season. But don't oversleep if you're on the West Coast, because this is going to be an instant classic.

No. 10: Losing your job for that autograph?

NFL referees Tripp Sutter and Jeff Lamberth were caught on tape approaching Bucs receiver Mike Evans with a piece of paper and pen on Sunday. The NFL said they weren't looking for an autograph. NFL Media reporter Tom Pelissero reported that they were exchanging information, involving a golf instructor.

People are skeptical, but the referees have the perfect defense: who would want Evans' autograph after that terrible game on Sunday? He couldn't catch anything. If an NFL referee was going to risk impropriety, wouldn't they go for Tom Brady? The key to a good defense is keeping it simple. All the refs have to say is that it wasn't Brady and move on.

We strive to be a platform where varying opinions may be voiced and heard. The views, thoughts, and opinions expressed by the author(s) of this article and/or by those providing comments are theirs alone, and do not represent those of Audacy, Inc. We are not responsible for any damages or losses arising from this article and/or any comment(s).
Featured Image Photo Credit: Thearon W. Henderson / Stringer / Getty Images