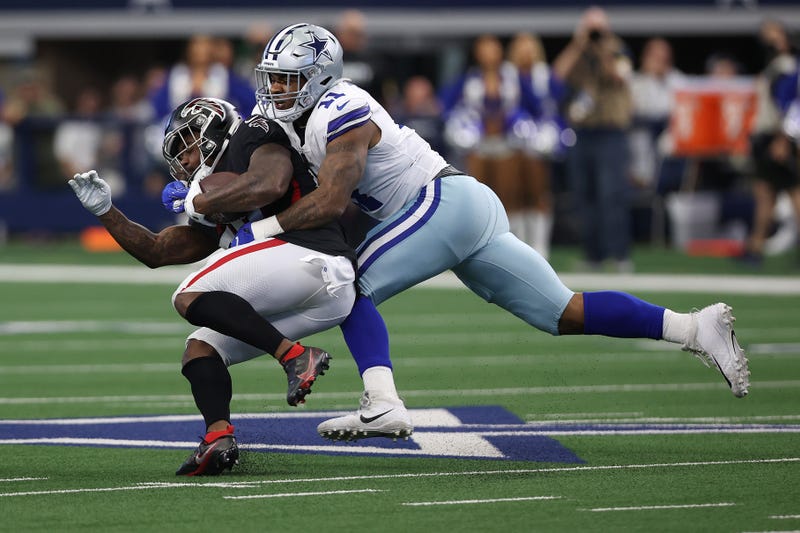 Following the Dallas Cowboys' beatdown of the Atlanta Falcons last Sunday, rookie linebacker Micah Parsons sent a strong message to opponents across the league, telling reporters that the team is "not to be F'd with right now."

While it's unrealistic to expect the Cowboys to play near flawless in all three phases each week from this point forward, they just may be the NFC's most complete team. And former NFL player and current podcast host Ross Tucker believes that Parsons deserves a ton of credit for Dallas' established success.

"He's not just crazy productive, he's making dudes look bad -- like, real bad," Tucker told the Tiki and Tierney show on Thursday. "I have seen multiple plays where tackles can't touch him. He's already a man among boys. I was actually looking at some of the sportsbooks, because I was curious, they don't have him listed as a DPOY candidate. We know he's going to be the DROY. But if you look at all of the stats, he should be talked about as the DPOY so far."

The Cowboys' defense stifled the Falcons, forcing three turnovers after failing to record a takeaway in two consecutive games. They also shut down veteran quarterback Matt Ryan, who threw for just 117 yards on 9 of 21 passing with an ugly 21.4 rating. As for Parsons, he recorded a team-high six solo tackles with one sack and one forced fumble.

Through nine games, Parsons -- who was taken 12th overall by the Cowboys in the 2021 draft -- leads the team in sacks (6), solo tackles (44), and tackles for a loss (11). The William Hill Sportsbook currently lists him as the favorite to win DROY, an award that no Cowboys defender has ever received.

Dallas' defensive unit will be put to the test this weekend, in a road matchup against the resurgent Kansas City Chiefs at Arrowhead Stadium. According to FiveThirtyEight's projections, the Cowboys (7-2) have a 90-percent chance to win the NFC East and a 21-percent chance to earn the NFC's first-round bye.

The entire NFL conversation between Tucker and Tiki and Tierney can be accessed in the audio player above.