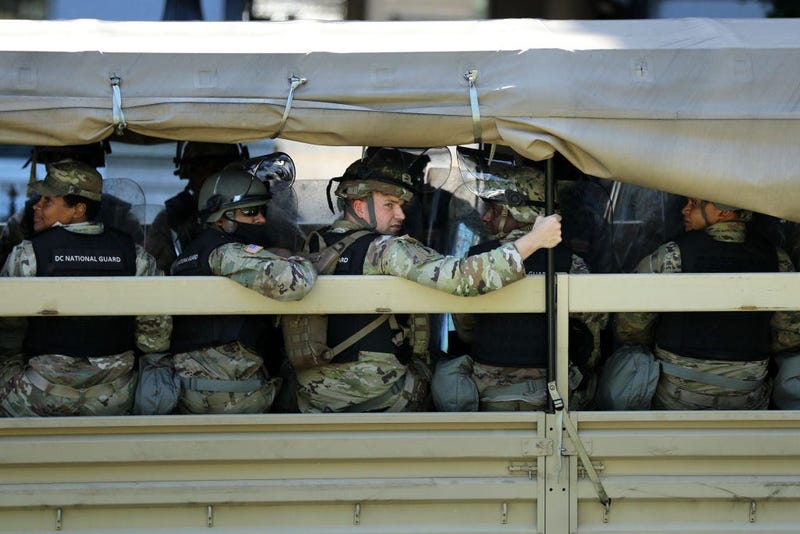 About 200 to 250 active-duty military police are deploying to Washington, D.C. in response to protests and riots in the nation's capital, CNN's Barbara Starr first reported.

Defense officials said troops could arrive as soon as Monday night from Fort Bragg, North Carolina and were on standby in case they are needed, but had no standing orders as of Monday evening. Two sources with knowledge of the troop movements confirmed the mobilization to Connecting Vets. Those sources were not authorized to speak publicly and provided information on condition of anonymity.

The Pentagon confirmed that "some active-duty service members are on a shortened alert status and are in the National Capital region, but not in the District of Columbia to ensure faster employment if necessary."

Over the weekend, soldiers from Fort Bragg and Fort Drum in New York were ordered to be ready to deploy within four hours if needed to respond to demonstrations in states across the country. Additionally, a source with knowledge of troop movements told Connecting Vets that the 82nd Airborne's Immediate Response Force (IRF) battalion had been alerted to prepare to deploy within two hours.

But in both cases, the personnel were reported to be potentially deploying to Minneapolis -- not the nation's capital. And in the case of the 82nd, the Pentagon denied that report.

These active-duty forces reportedly en route to D.C. would be supplementing the already activated entirety of D.C.'s National Guard -- 1,200 strong. While D.C. Mayor Muriel Bowser said she requested 500 Guard troops be activated in response to protests in the nation’s capital, the entire D.C. Guard force was activated by Army Secretary Ryan McCarthy.

In total, more than 17,000 National Guard troops have been activated to respond to "civil unrest" across the country.

CNN also shared video showing military vehicles moving into place near the White House, the center of much of the weekend's protests.

Military trucks with soldiers have moved in place to protect the White House. I worked in the White House, and I’ve never seen anything like this. This does not look like America. This looks like a scene from Tiananmen Square in China in 1989. pic.twitter.com/9EznSriUJo

As recently as Sunday afternoon, DoD officials had not asked for active-duty forces to support the operation.

"At this time, we have not asked for the Department of Defense to give us active-duty forces to support this operation," Army Maj. Gen. Jon Jensen said in a news briefing held by phone Sunday afternoon. Jensen is adjutant general of the Minnesota National Guard.

"The Secretary of Defense and the chairman have personally spoken with Gov. Walz twice in the last 24-hours and express the department's readiness to provide support to local and state authorities as requested," Pentagon spokesman Jonathan Rath Hoffman said in an emailed statement on Sunday. "Currently, the governor is fully activating the Minnesota National Guard and is working with neighboring states for more potential support. At this time there is no request by the governor of Minnesota for Title 10 forces to support the Minnesota National Guard or state law enforcement. As a prudent planning measure, the department has directed U.S. Northern Command to increase the alert status of several units should they be requested by the governor to support Minnesota authorities. These are units that normally maintain a 48-hour recall to support state civil authorities for several contingencies (like natural disasters) and are now on four-hour status.”

This is a developing story. This article will be updated as information becomes available.

Jack Murphy contributed to this report.
Reach Elizabeth Howe on Twitter @ECBHowe.Want to get more connected to the stories and resources Connecting Vets has to offer? Click here to sign up for our weekly newsletter.