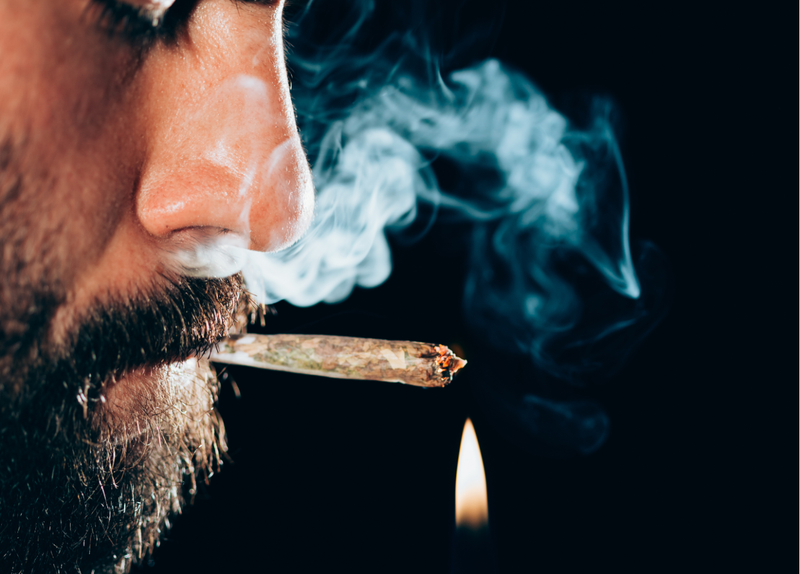 “And people ask why we have 22 veterans dying by suicide every single day.”

Green Beret veteran Adam Smith almost became part of those 22 in early January 2016. Suffering from post-traumatic stress, Smith consumed all the alcohol in his home, wrote a letter to his loved ones, put a gun in his mouth — and woke up hours later to find he had miraculously passed out before pulling the trigger.

Today, he has found methods of mitigating the symptoms of his PTS — namely, marijuana.

But his access is limited and complex, as it is for all veterans, and Smith very strongly believes this is closely tied to the veteran suicide rate.

Nine times out of ten, Smith explains, a veteran who turns to the Department of Veterans Affairs for healthcare will find themselves being treated for symptoms.

“So now, take the same person who used to have purpose and used to have mission and used to understand their place in the world and have this idea that they could constantly drive forward and be better. Put them into a civilian market,” Smith continued. “They've got post-traumatic stress, they've got traumatic brain injury, their brain doesn't function right, their body doesn't function right, they're depressed, they have anxiety, and now they're getting medication that's shutting their brain off-- They can't get better.”

While VA did not comment on Smith's allegations, they did provide a statement regarding the general illegality of marijuana.

“Marijuana is illegal under federal law, and until federal law changes, VA is not able to prescribe it,” said Susan CarterVA spokesperson. “VA is committed to treatment options for Veterans and supports research into potential treatment options that may prove valuable.”

So — with VAs commitment to legal treatment options rather than cannabis-related ones — Smith started using cannabis outside of his VA healthcare.

Smith first started using cannabis while participating in an awareness-raising cross-country bike ride in 2015 that brought him to Washington State — where cannabis is legal.

“It was the first time I'd ever used cannabis in my entire life. I found that it helped minimize my anxiety. I gained clarity and focus. My brain didn't seem foggy. I slept better. I wasn't so hypervigilant that it was hard for me to pay attention to what was right in front of me...It worked,” Smith said. “And not only did it work for me but my buddy who had epilepsy — was having multiple seizures every single month — when he chose to start using cannabis his seizures went down to three a year or less.”

Since then, Smith has been using cannabis to mitigate the symptoms of PTS and helping other veterans do the same — because VA Health Care System doctors cannot.

Regardless of state laws, the Department of Veterans Affairs and its health care facilities and doctors operate at the federal level — where cannabis use is still a Schedule 1 drug.

“The same level as heroine. As crystal meth,” Smith pointed out.

“It forces veterans to go out of network, pay higher fees, to be able to participate in the state-legal medical cannabis market place,” said Justin Strekal, political director at the National Organization for the Reform of Marijuana Laws (NORML). “While the VA has a policy that individuals would not lose their benefits simply for consuming cannabis, that is not well-known. And it has a deleterious effect on the ability for veterans to have honest conversations with their doctors.”

But this isn’t the only detrimental effect the limits are having on veterans.

“The thing is that the VA is using all the same drugs they've been using the whole time that are habit-forming and since it's a Schedule 1 drug they won't even contemplate utilization of cannabis at the federal level,” Smith said.

Smith believes removing marijuana from the list of Schedule 1 drugs needs to be the first step in making cannabis more accessible to veterans — and he’s not alone.

Will 2020 be the year for marijuana legislation?

Cannabis-related legislation has been working its way through various levels of the 116th Congress all year — including several pieces of legislation that directly address the needs of veterans. 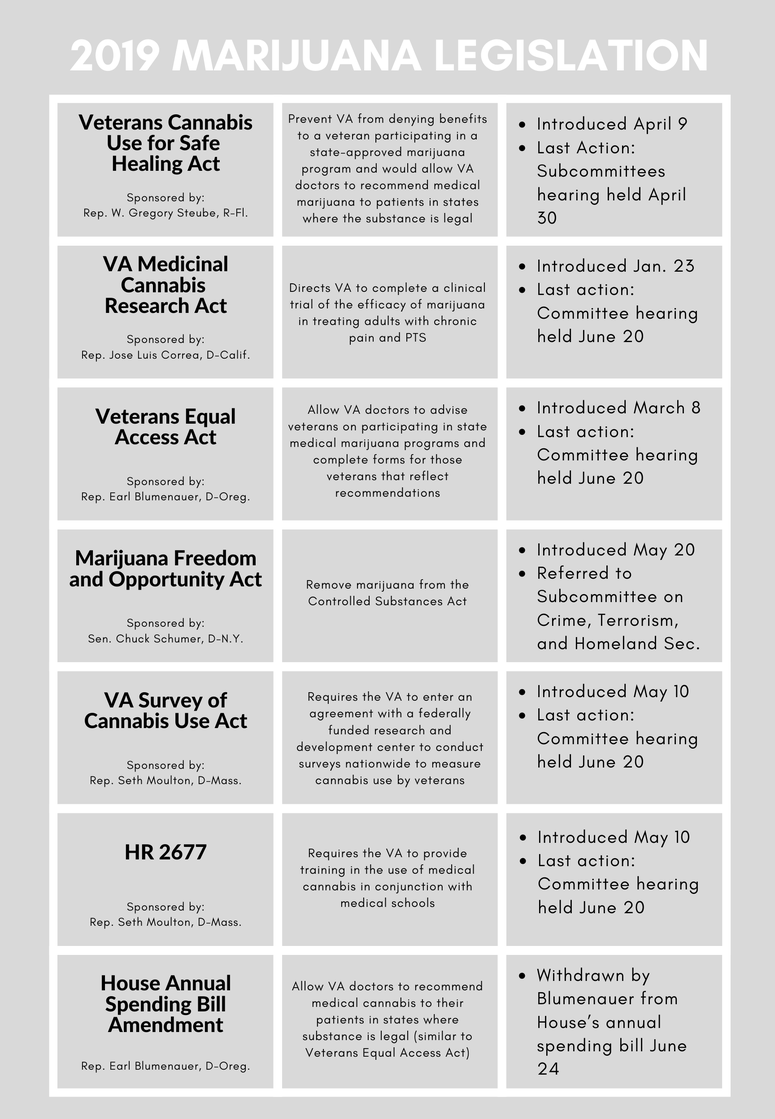 None of this legislation has made it very far.

“Sadly, we're in a place right now where the political appetite to actually mitigate the tension between federal criminalization, and now the majority of states that have medical cannabis programs continues to grow," Strekal said. "And an increasing number of lawmakers are willing to say that they are in support of veterans to have the legal option to get medicinal cannabis. They have yet to enact any reform,”

Connecting Vets reached out to the office of House Committee on Veteran’s Affairs Chairman Mark Takano, D-Calif., to see why this legislation is not advancing and received a statement from July 11, 2019.

“Cannabis must be objectively researched. Period,” the statement read. “Medicinal cannabis may have the potential to manage chronic pain better than opioids and treat PTSD, and clinicians need to understand the efficacy of this drug and any negative side effects. In those states that allow medicinal cannabis, VA doctors should be able to provide recommendations to veterans for medicinal cannabis programs.”

“We're in this Catch-22 where the federal government won't acknowledge research or empower research for consumer-grade cannabis because of the (National Institute on Drug Abuse) monopoly and marijuana's Schedule 1 status,” Strekal said.

The NIDA monopoly refers to the legislation that says all marijuana used for federally approved research has to come from the University of Mississippi, as part of a contract with the National Institute on Drug Abuse. But, in recent years, the university hasn’t been able to keep up with research needs.

Sue Sisley was the principal investigator on a study conducted by the Scottsdale Research Institute — it is currently the longest cannabis study focused on veterans. Over multiple years, Sisley’s team supplied 76 veterans with portions of cannabis in order to test the effect of marijuana on post-traumatic stress.

But the NIDA samples were lacking in quality and supply to the point of hindering the study, Sisley told CBS News.

While efforts have been made to mitigate this problem — additional cannabis suppliers are currently being considered to supplement the supply provided by the University of Mississippi — Strekal argues that more than enough adequate research already exists for some of the veteran-related cannabis legislation to pass.

“Right now, one of the ways that I put it in perspective, a simple search on pubmed.gov —which is hosted by the National Institutes of Health — will yield over 30,000 hits on a search of marijuana peer-reviewed published studies,” Strekal said. “To put that in contrast, a search of Adderal will yield merely 200.”

“So when we talk about pursuing options for veterans to be able to seek relief from ailments that were a result of their service or have happened since — it's absolutely cruel that the federal government would criminalize cannabis from being an option,” Strekal added.

Representative Earl Blumenauer, who has been working on “reforming our failed prohibition of cannabis for decades,” agrees.

“I have no quarrel with more research,” Blumenauer said. “But the therapeutic value of medical cannabis for veterans I think is beyond question.”

“Because the supply of cannabis for research purposes is restricted, because they cannot be supportive of research that shows the benefits of cannabis, it’s been constrained,” Blumenauer added. “There is enough I think — not just anecdotal evidence.”

Blumenauer did concede, however, that exactly "why medical cannabis works" could use some clarification.

“Exactly how it works, exact dosage — I just had a meeting yesterday with parents of children with extreme seizure disorder. Violent shaking, infant epilepsy. They don’t know exactly why medical cannabis works, but it does.”

Research into how it works — and what other health problems it may cause — is the type of research that pharmacist Rep. Buddy Carter, R-Ga. argues is necessary.

While Carter is not opposed to veterans who feel cannabis helps manage PTS, he is concerned about the lack of research.

“I'm concerned that we haven't done the research and development and what I'm trying to avoid is what I find myself in today,” Carter said. “I'm in a committee meeting here. We're considering vaping — which has been legal for some time now, and we found out that it's causing health problems because we didn't research it like we should have. I'm just trying to avoid the same situation that I find myself in today.”

Again, however, the further research Carter suggests is necessary cannot be conducted until legislation passes removing marijuana from the list of Schedule I drugs — a goal that saw unprecedented progress in the last months of 2019.

After nearly a year of pro-cannabis veteran legislation being stalled in Congress for one reason or another, late-comer legislation — the Marijuana Opportunity, Reinvestment and Expungement (MORE) Act — passed a vote in the House Judiciary Committee.

The legislation would, among other things, remove marijuana from the Controlled Substances Act as a Schedule I drug.

Erik Altieri, executive director of NORML described the successful vote as “a truly historic moment in our nation’s political history.”

The bill, introduced by Rep. Jerry Nadler, D-N.Y. in July of this year, would:

However, the bill has yet to see a full House vote — the next necessary step before it's passed on to the Senate. And some committee members said they worried the Senate would not take up the bill as it is written. But Nadler said the committee should not allow the Senate to determine what it will and will not pass.

Congress has yet to pass any substantive national marijuana legislation in either chamber so far this session.

“There isn’t an elected official in this country that would refuse to pay lip service to the veteran community,” Strekal said. “And yet, sadly, when it comes to their health and well-being and allowing them access to a therapeutic substance that could alleviate their symptoms, they have stood in the way of progress.”