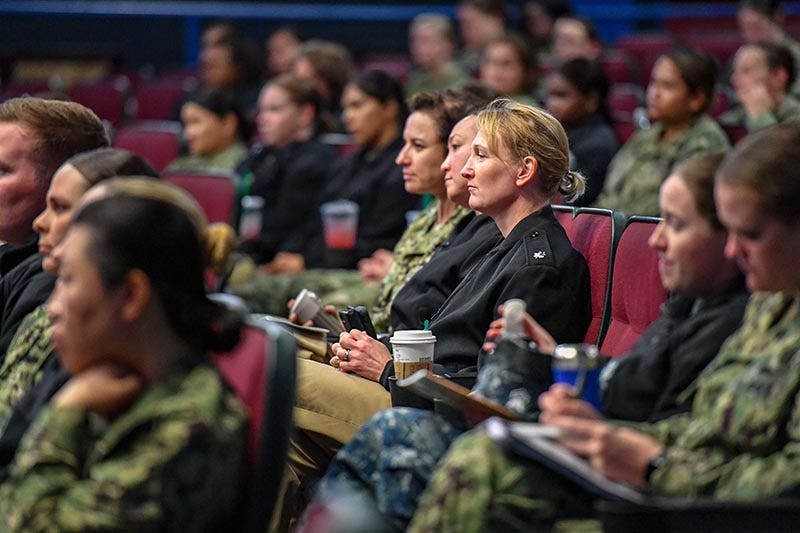 1 in 4 women veterans have experienced being cat-called, stared at, or been on the receiving end of sexually derogatory comments when visiting a VA facility.

This number came from a VA study published in the Journal of Women’s Health Issues and was the topic of concern among House lawmakers at a hearing to discuss the cultural barriers women veterans face when trying to access care at VA.

“Even though women have served in every American conflict, the Department of Veterans Affairs is a system created to serve men and did not serve women veterans until the 1980s,” said Rep. Julia Brownley, D-Calif., “Some say that ‘the organization is not your grandfather’s VA’ but there is still a long way to go."

“We knew it was happening, we got the data to show it was happening..it has been a challenge...other systems don’t have to manage this military culture bleeding into veteran culture,” said Dr. Patricia Hayes of the Veterans Health Administration.

A recent anonymous Pentagon survey found that sexual assaults in the military increased to more than 20,000 in 2018.

During the hearing, Dr. Hayes cited VA’s “it’s not a compliment, it’s harassment” campaign as evidence of its progress towards a safer environment at VA facilities. The campaign and training, while strongly encouraged, is not mandatory for everyone employed at the Department of Veterans Affairs.

“There are a lot of employees that have been completely untouched by that. It’s a crisis and we need to treat it as such,” said Rep. Brownley. “Making cultural changes is really hard and unless you are on it, on it, on it, on it--it’s not gonna happen.”

In an effort to move toward this environmental change, legislators recently announced a new task force focused on the “culture, healthcare, economic opportunity and benefits access for women veterans.”

“We don’t need another national portrait campaign...women veterans don't need another male-dominated VSO to represent us at the table, we need to have a seat at the table,” said Ginger Miller, Navy veteran and CEO of Women Veterans Interactive.

Her organization has collaborated with VA in the past to offer claims clinics, assisting women veterans in navigating the VA claims process. But Miller challenged VA to partner with more than just her group.

The veteran service organization space has long been held by what many call “The Big Six,” storied groups like the American Legion and Vietnam Veterans of America. But as the population of women veterans grows, women-led veteran service organizations have become increasingly sought-after in advocating on behalf of a community that wasn’t able to officially serve in the U.S. military and receive benefits until 1948.

Minority Veterans of America is one of the many groups changing the face of veteran service organizations. In addition to creating more inclusive spaces for women, minority, and LGBTQ veterans, they are also championing VA change the verbiage of its motto.

No longer an ‘old guys club:’ How women are changing the face of veterans groups

Should VA change its motto?

The Department of Veteran Affairs motto which echoes the words of Abraham Lincoln, “To care for him who shall have borne the battle and for his widow, and his orphan,” has been a point of sensitivity for many but groups like MVA, but the group also acknowledges that changing words alone is not a solution.

“The invisibility is interwoven into the memories of our service and becomes the narrative of our experience as veterans,” said Lindsay Church, Navy veteran and CEO or Minority Veterans and America. “Changing the motto won’t by itself address the deep cultural divide that exists between women and veteran community but it is a step in the direction toward inclusion."

This hearing marked the first time this subcommittee convened to strictly discuss how to better serve the 2 million women veterans in the U.S. and yet only six members of Congress attended the hearing.

“I think this is a veterans' ‘me too’ moment,’ no veteran should have her service considered less valuable because of her gender or minority status...I intend on following up and having more hearings like this one,” said Rep. Brownley.

If you or someone you know is a survivor of sexual violence or needs help, call the National Sexual Assault hotline at 1-800-656-4673 24/7 or go to hotline.rainn.org/online. The DoD also has a Safe Helpline for live, one-on-one support that is confidential, anonymous and available worldwide, 24/7.
Want to get more connected to the great stories and resources Connecting Vets has to offer? Click here to sign up for our weekly newsletter.