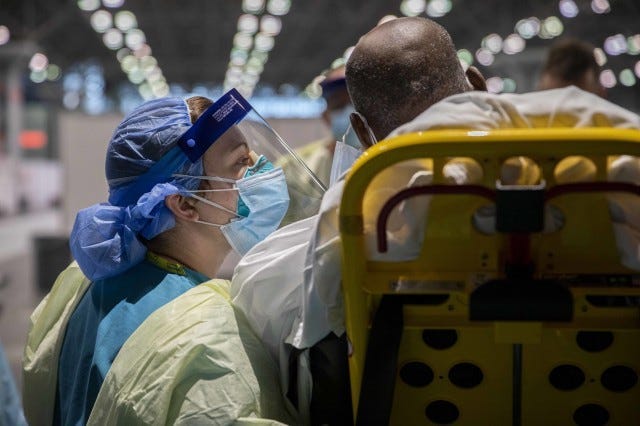 ''We train for war,'' said Army Col. Robert F. Howe II, the commander of the Army's 1st Medical Brigade out of Fort Hood, Texas. ''But getting to support citizens in our homeland is special. Helping fellow citizens is what we're here for.''

The Silver Knights are no strangers to conflict. The brigade is the Army's oldest color-bearing medical unit, forged on the battlefields of World War I as they supported the first American units committed to that conflict more than 100 years ago.

Today, new enemies have brought new demands upon the storied unit, and they are once again on the cutting edge of response in the face of COVID-19.

The mission of the Silver Knights is to provide command and control, administrative assistance, and technical supervision of medical units used in support of operations around the world. The brigade also provides combat health support to forces, all while retaining the ability to deploy medical support packages on short notice.

In the past, these capabilities were used almost exclusively outside the United States; however, their assets have proven instrumental in the whole-of-nation response to the COVID-19 pandemic. Within 24 hours of notification, the Silver Knights sent medical personnel from the 9th Hospital Center and the 627th Hospital Center to New York City and Seattle, respectively.

''To be expeditionary in our own country is awesome and inspiring,'' Howe said. ''There's something special and tangible in seeing the benefits of what you’re doing in your own backyard.''

In addition to other regions of the country, the 1st Medical Brigade is assigned to support the efforts of Task Force Center, the command and control element coordinating defense support of civil authorities in 15 states in the central U.S.

''I cannot say enough about the partnership that was developed between Colonel Howe and his organization and Task Force Center,'' said Army Maj. Gen. Michael A. Stone, the commander of Task Force Center. ''Their expertise, professionalism and tireless work ensured that we were never late to need and that the appropriate medical capabilities were delivered when needed, where needed. They really are a top-notch unit with excellent leadership.''

While flattered by the high praise heaped upon his unit, Howe is quick to point out that it was a team-effort, involving a whole-of-government approach.

''We've had amazing opportunities to coordinate and work closely with the U.S. Department of Health and Human Services, the U.S. Public Health Service, the Federal Emergency Management Agency, and all sorts of other partners at various levels,'' he said. ''Everyone gets a voice, and everyone is very focused on defeating COVID.''

In addition to deploying traditional military assets like the 9th and 627th Hospital Centers, the Silver Knights had the opportunity to implement a military asset that didn't exist before the global pandemic. The Urban Augmentation Medical Task Force, or UAMTF, is a new concept in rapid-deploying medical assets provided by the Army Reserve.

The medical expertise that UAMFT units offer is in direct contrast to a combat support hospital, where a large component of the unit is support personnel. The UAMTF concept allows the Army to rapidly deploy a unit that is tailor fitted to meet the specific requirements of the mission.

Army Lt. Col. Rob Wyatt, the commander of the 801-2 UAMTF, explained that a UAMTF is better prepared for a situation where self-sufficient medical personnel are needed.

''The unit came together, its people transitioned from civilians to active-duty soldiers in a matter of days,'' Wyatt said. ''We have shown that when we're needed, we can be there quickly and ready to provide our capabilities to the fight.''

The success of not only the UAMTF, but also of the military's support of civil authorities in response to COVID-19, has not gone unnoticed, at least in the mind of Howe.

''I couldn’t be prouder to serve alongside these professional soldiers from all walks of life, yet united for one purpose: to defeat COVID-19,'' Howe said. ''This is a defining moment in our history, and one of the most significant things I have supported in my 30 year Army career. Our soldiers are completely focused on saving lives. There is nothing more noble than that.''