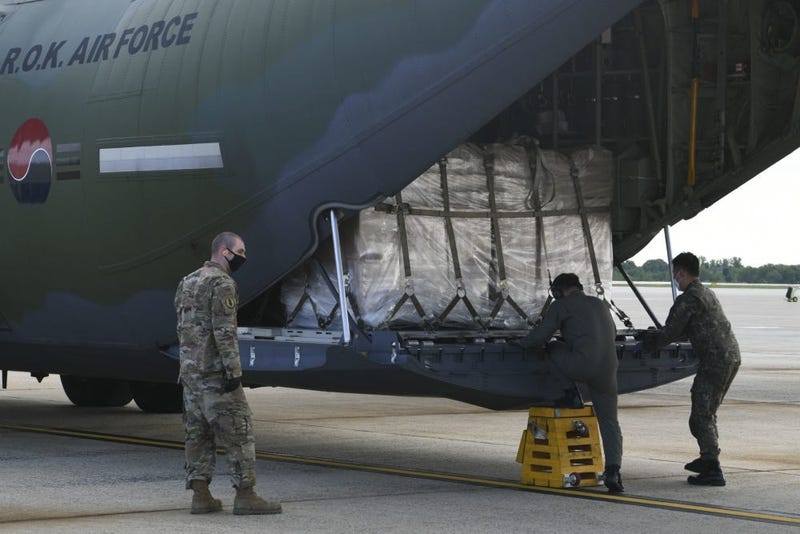 The Department of Veterans Affairs accepted a donation of half a million N95 protective masks from South Korea this week to help with supply shortages during the coronavirus pandemic.

The donated masks will be distributed across VA's system of hundreds of hospitals and thousands of clinics nationwide, the department announced Tuesday. The masks arrived at Maryland's Joint Base Andrews Naval Air Facility Tuesday morning.

South Korea Ministry of Patriots and Veterans Affairs officials said the donation was because of the "noble sacrifice made 70 years ago by the American veterans of the Korean War."

"These masks symbolize our countries' alliance and the appreciation of the Korean people who have never forgotten the American veterans' service and sacrifice," Minister Sam-duck Park said in a statement. "We are always grateful for them."

VA and South Korean embassy officials met the flight this morning. The masks were available because of a decrease in COVID-19 cases in South Korea, officials said.

"The Republic of Korea’s generous gift to America’s veterans is deeply appreciated and we humbly accept,” VA Secretary Robert Wilkie said in a statement Tuesday. “We will use it to carry out our solemn mission of caring for our veterans. It is also a sign of the deep and ongoing respect our two nations have for each other — cemented nearly 70 years ago in a time of war and great crisis. So many years later, we are joined in another just and noble cause of containing a pandemic that threatens our citizens’ lives and livelihoods and poses a grave threat to the veterans we have both pledged to protect. This gesture has indeed touched the hearts of American veterans and we are grateful to have such a close ally in these uncertain times.”

The 70th anniversary of the start of the Korean War is June 25.

The international delivery of critical supplies comes as VA staff and internal memos for weeks have reflected shortages or lack of personal protective equipment and supplies at VA medical facilities across the country. VA officials consistently denied those accounts, calling them "false allegations," until recently, when top leaders began to acknowledge shortages and rationing.

In recent weeks, Stone and internal VA memos announced that medical staff previously limited to one mask per week would be provided one per day, and every healthcare employee caring for patients directly -- either in VA facilities or at home -- would receive protective gear. Before, VA limited protective supplies only to medical staff treating COVID-19 and other high-risk patients.

For months, VA staff told Connecting Vets they lacked proper protective gear, were provided expired supplies or were severely rationing equipment such as masks, gowns and gloves. Federal union leaders accused the department of "endangering" veteran patients and staff, and those allegations prompted a Department of Labor investigation.

As cases climb past 10,000, VA announces plan to return to 'pre-COVID-19 operations'