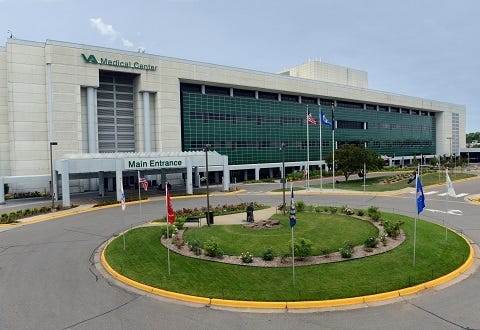 A veteran died by suicide at a Minneapolis VA hospital after multiple failings by Department of Veterans Affairs staff, a new watchdog report shows.

At least three VA staff members -- a nurse, a chaplain and a dietician -- heard the veteran express suicidal thoughts and didn't tell doctors, as they were all trained to do.

A veteran in their 60s arrived at a VA emergency department asking for help with withdrawal symptoms in spring 2018. He or she told ER staff they were having thoughts of suicide and homicide and said they had a gun at home. The veteran was not identified in the report.

The veteran had previously been receiving care at another VA facility for more than 10 years and had been diagnosed with major depression and a history of substance abuse that was in remission.

The veteran was admitted to the hospital for observation and treatment of their depression, suicidal thoughts, withdrawal symptoms and because they lived alone and had “ample access” to a means of suicide, according to a report from the VA Office of the Inspector General.

Due to a lack of available psychiatric beds, the veteran was moved to a medical unit. The psychiatrist said the veteran did not require “continuous monitoring,” noting that they had a “heightened, but not imminent risk, for suicide,” investigators found.

The veteran would later go missing from the medical unit. About two hours before the veteran was discovered missing, a nurse overheard them on a phone call “giving away property and expressing feelings of impending death.”

The nurse did not document or report the conversation to the veterans’ treatment team.

VA police later received a call that the veteran had died by suicide.

Investigators found multiple failings in communication by VA, including failure to notify the hospital’s suicide prevention coordinator of a veteran with suicidal thoughts.

Several staff members did not tell doctors when the veteran was having suicidal thoughts and displaying other warning signs, which goes against the training they had completed.

Though some staff did document the veteran’s suicidal thoughts and warning signs, investigators did not find any indication that those warnings were heeded.

“These care coordination deficiencies may have resulted in a failure to provide adequate mental health assessment and monitoring of the patient,” investigators said in their report.

Investigators made multiple recommendations in light of their findings, including consulting Human Resources and attorneys to determine whether “personnel actions are warranted.”

Leaders of the VA facility involved agreed with OIG’s recommendations and provided an action plan.

"Our deepest condolences go out to the veteran's family and friends," VA spokesman Brad Doboszenski told Connecting Vets in a statement.

Since the veteran's death "nearly 20 months ago," Doboszenski said the Minneapolis VA Health Care System has implemented multiple changes "to help prevent similar tragic acts in the future," including:

VA to focus on suicide prevention, electronic health records and caregiver benefits in 2020