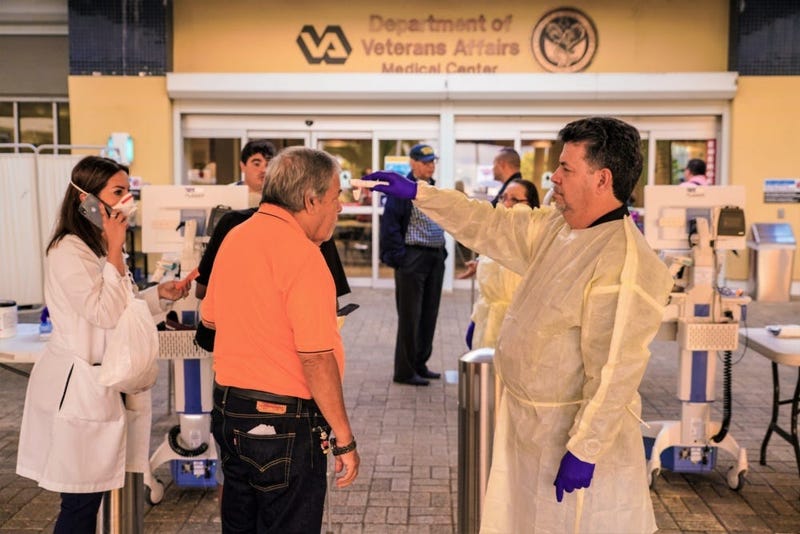 The Department of Veterans Affairs reached a grim milestone on Nov. 1 — 4,000 deaths from the coronavirus pandemic as active cases continue to rise.

Over the course of October, VA recorded more than 550 deaths, still down from the peak of 825 deaths in August, but higher than the 489 recorded in September.

Seven months since VA recorded its first veteran lost to the virus the department has averaged about 17 deaths per day, roughly equivalent to the rate of veteran suicide, according to VA data, which the president, lawmakers and advocates have all referred to as a "crisis" and a "top priority."

VA's mortality rate is influenced by the age and overall health of its patients, who tend to be older and less healthy than the overall American population. VA's data also includes its staff and some non-veteran patients the department treated as part of its Fourth Mission. As of Nov. 1, VA recorded 62 staff deaths, adding four employee deaths in October.

Increases in the overall number of deaths at the department appear to generally follow in the wake of trends in active cases increasing both at VA and across the United States overall.

Active cases at the department fell steadily for about two months before they began to rise again in late September. Department leaders said this summer they were preparing for a second wave of the virus during the fall and winter. In October, Dr. Anthony Fauci, director of the National Institute of Allergy and Infectious Diseases, told military and veteran caregivers that the United States may have a "very difficult fall and winter" because of the pandemic.

A month ago on Oct. 1, VA recorded 3,331 patients and staff actively ill from COVID-19. As of Nov. 1, the department recorded more than 6,100 active cases, the vast majority of which are veteran patients — a nearly 85% increase this time last month.

The number of patients at the department who require hospitalization -- the statistic VA cites as the most reliable judge of how it's patients are faring amid the pandemic -- has consistently fallen since a height of 38% in March, to about 15% as of mid-October, Noel said.

But those numbers also appear to be rising in recent weeks. In the latest of VA's weekly pandemic response reports for Oct. 20-26, the department recorded 504 COVID-19 inpatients, a more than 46% increase since earlier in October. In early October, Noel said the department's hospitalization rate was about 13%, which means it has risen slightly over the course of the month and is now equal to the overall rate from September, though still lower than prior months.

The report for the final week of October, which includes updated hospitalization figures, had not yet been released publicly as of Nov. 1.

VA also surpassed 76,000 total cases over the weekend, adding more than 14,000 cases over the month of October, an about 25% increase over the entire month. Of VA's more than 76,000 cases, about 86% are considered convalescent, meaning they have either recovered or passed the 14-day mark since their last positive test. 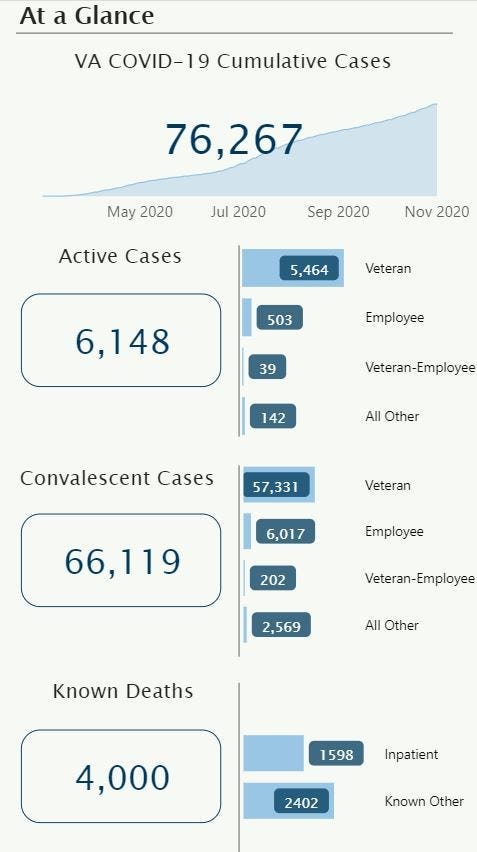 The department's total case count now approaches the total number of cases in several states, such as Kansas (73,007) and Connecticut (65,431), according to CDC data. VA's total number of cases exceeds those recorded in 17 states. The department cares for a total of more than 9 million veterans, roughly half of the veterans in the United States, and has nearly 400,000 employees.

VA recorded 846,889 total COVID-19 tests administered nationwide during the pandemic as of Oct. 27 and has not updated that total since then. That total number of tests does not reflect how many individual people have been tested at VA, but rather how many tests have been administered -- some people may receive multiple tests. In September, VA averaged about 4,790 COVID-19 tests per day.

Some veterans have been disproportionately affected by COVID-19. Results of a VA study of more than a quarter of a million veterans released late in late September showed that Black and Hispanic veterans were twice as likely as white veterans to test positive for the virus at VA, which researchers said indicated an "urgent need to proactively tailor strategies to contain and prevent further outbreaks in racial and ethnic minority communities. Department data provided to Connecting Vets this summer showed Black and Hispanic veterans made up nearly half of all VA patients who tested positive for the coronavirus, though they only comprise about 23% of all department patients.