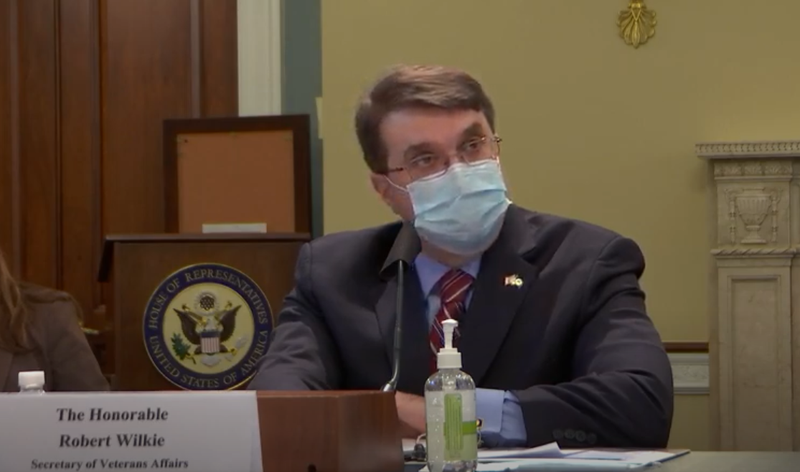 It marked the first time a cabinet-level official attended a House hearing since the Capitol complex was locked down in March because of the COVID-19 outbreak.

Wilkie last testified before lawmakers on March 3, a House Appropriations hearing on the 2021 VA budget, where Democrats said the additional $12.9 billion the administration requested was a "fantasy" without renegotiating budget caps. It was at that same committee hearing Wilkie revealed for the first time a veteran had tested positive for the virus.

On Thursday, Wilkie was back testifying before that same committee and much has changed. He wore a mask during his testimony, as did lawmakers who attended in person. Other lawmakers attended via video call.

Wilkie spent much of his opening statement Thursday praising department staff, saying they were "fighting a war in America that none of us would have predicted" and are "routinely putting their lives on the line and sacrificing time with their families to care for veterans, most of whom are older and are therefore more vulnerable to the virus."

The Department of Labor is investigating VA after allegations from employees and union leaders that the agency endangered veteran patients and staff because of personal protective equipment shortages and forced rationing VA leaders publicly denied for months, though internal memos and VA staff told a very different story. VA frontline staff at hospitals across the country protested the lack of PPE during their shift changes.

"We expect VA to provide enough PPE to every single person working at a VHA facility and patients, when necessary," said Rep. Debbie Wasserman Schultz, D-Fla., adding that it was "unacceptable" that VA limited personal protective fear to staff directly treating COVID-19 patients.

VA officials on Thursday appeared to continue to deny that staff ever went without proper PPE.

"Our workforce has had what they need throughout the entire response," said Jennifer MacDonald, VA chief consultant to the deputy undersecretary for health.

"We never ran out," Wilkie said of supplies during the pandemic so far, though he said VA's supply chain was disrupted and now he is "looking for ways to prevent that from happening again in the event this thing boomerangs back in the fall ... We are marshaling resources and storing them up at a greater pace" than earlier this year.

VA faced criticism from veterans, advocates and lawmakers over its use of the anti-malarial drug hydroxychloroquine on virus patients. The drug so far has not been proven as an effective COVID-19 treatment, and some studies show it could be harmful. VA has used it on more than 1,300 patients and Wilkie said the department does not plan to stop.

"What is astounding to me is the VA is still insisting on providing this drug to veterans," Schultz said, adding that VA has lacked communication on its use of the drug.

Wilkie said VA has "brought down the use" of the drug, and last week prescribed three doses, adding that he expects use of the drug continue to decrease at department hospitals as treatments such as remdesivir increase.

Rep. John Carter, R-Texas, said VA so far has allocated just more than $2 billion of that money and asked why the department was slow to spend the money.

VA officials said some expenses have been lower, some higher than expected, and the department would benefit from additional flexibility from Congress on how it can use the money.

In addition to PPE shortages and hydroxychloroquine use, lawmakers asked about telehealth, veteran mental health and other pervasive issues raising even more concerns during the pandemic.

Health experts and advocates warned veterans' risk of suicide could increase even as the pandemic abates and the country could see a huge spike in veteran homelessness.VA asked for public donations to help. Some Native veterans, already struggling to access VA healthcare before the outbreak, are cut off from help because of the pandemic.

During the pandemic VA officials said the department expanded its capacity, hired thousands of healthcare workers, held more than 1 million telehealth appointments and asked retired doctors and nurses to return to duty to care for vets and non-veterans under its fourth mission.

This week, lawmakers heard from advocates that some veterans have been denied benefits because exams required for disability claims were canceled during the pandemic, despite VA's policy not to deny claims because of the outbreak.

VA officials said the department has been set back because it can't safely hold the exams, but asked Congress for permission to allow its doctors to practice across state lines and for qualified nurses to conduct the exams.

"Our team is embarrassed," VA Undersecretary for Benefits Paul Lawrence said of the mounting backlog of claims.

Several of the lawmakers Thursday did not appear satisfied with VA's COVID-19 response so far, including its communication about that response.

"VA's lack of preparedness and mismanagement has led to needless death and suffering and much fear among veterans, their families and the healthcare professionals who care for them," Appropriations Chairwoman Rep. Nita Lowey, D-N.Y., said. "The lack of urgency to address (PPE shortages) has likely contributed to additional sickness and death ... At a time when veterans most need VA to be ahead of the curve, it is falling behind. We need to understand what went wrong ... to avoid the shameful treatment of veterans in the future."