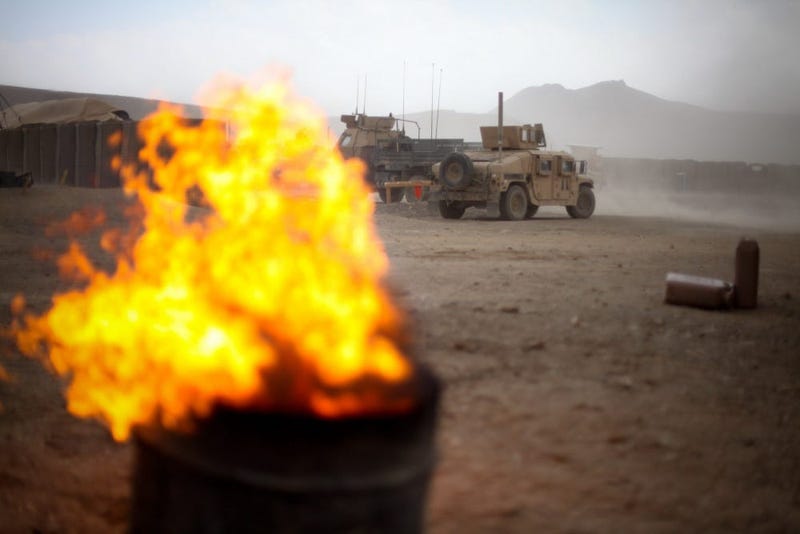 Senators on Wednesday asked the Department of Veterans Affairs what is taking so long to provide benefits to veterans exposed to potentially lethal toxins.

From Blue Water Navy Vietnam veterans, who have waited decades to receive coverage for their Agent Orange-related illnesses, to post-9/11 veterans exposed to burn pits and other toxins they say are causing rare cancers, respiratory illness and other issues, thousands of former service members are waiting for help.

Bobby Daniels, 79, a Blue Water Navy veteran with terminal prostate cancer was at the hearing, after issuing an emotional plea the day before for VA or President Donald Trump to lift a VA stay on all Blue Water claims until 2020, as first reported by Connecting Vets in July.

"It's not all about me," Daniels said. "It's about those other boys out there."

"The VA is outliving these veterans and that's simply not right," he said. "Now is the time."

SVAC Chairman Sen. Johnny Isakson, R-Ga., said there is a need for fact-based evidence to prevent a "rush to justice" in providing benefits to veterans who may have been exposed to toxins during service.

"We're a long way from legislation," he said at the start of the hearing.

Most Wounded Warriors report toxic exposure, 9 percent are getting VA treatment for it

Patricia Hastings, VA chief consultant for post-deployment health, said VA and DoD "need to, during conflict, be looking at what (service members) are exposed to. And we've done that with airborne hazards."

Defense officials at the hearing repeatedly mentioned that there are medical personnel with deployed units to track potentially multiple toxic exposures during dangerous missions.

But Sen. Bill Cassidy, R-La., wasn't convinced that was enough -- or logistically sound.

"How, in that dynamic situation, is this (toxic exposure data) being captured?" he asked.

Both VA and DoD officials consistently pointed to the Individual Longitudinal Exposure Record (ILER) as a way to track exposures, but that system only tracks records back to 2000 and many veterans and veteran service organizations have raised concerns that those records are not always reliable, accurate or complete.

Sen. Richard Blumenthal, D-Conn., said he was disturbed DoD continues to use burn pits when "DoD's own tests show the air is not safe to breathe ... We are repeating the mistakes of our past with Agent Orange."

Terry Rauch, acting deputy secretary for Health Readiness Policy and Oversight at DoD, said the department's "position is to move away from burn pits."

"It won't happen tomorrow, but we're working on it," he said.

Senators expressed frustration about VA delays in processing toxic exposure claims and in deciding what diseases it would list as "presumptive," or illnesses that VA assumes a veteran has because of their service.

Hastings, VA chief consultant for post-deployment health, said she didn't know, but added that many claims "seem not related to burn pits" such as gastrointestinal issues or migraines. She said it is easier to connect respiratory issues to burn pit exposure.

Sen. Sherrod Brown, D-Ohio, asked if VA has a plan to create a list of illnesses presumed to be caused by burn pit exposure, and if so, when.

VA said it did not have plans to do so.

Brown said handling burn pit exposure claims case-by-case could slow the process in a similar way to Agent Orange claims, which took decades, and in some cases are still not being processed.

"There seems to be a lack of urgency," he said.

Sen. Thom Tillis, R-NC, said VA should conduct "more frequent reviews of presumptions" instead of "episodic" updates such as with Vietnam and Gulf War veterans.  Hastings said VA was considering that.

Tester was referring to the Procopio v. Wilkie court decision earlier this year, which reversed a 1997 VA decision to deny that Blue Water veterans were exposed to the toxic herbicide Agent Orange while serving offshore of Vietnam. The Procopio decision earlier this year meant that the VA should presume veterans who served in the waters off the coast were exposed to Agent Orange at some point during their service, and as a result were eligible for related VA benefits. But those claims have been stayed by VA despite the court decision.

Senators Wednesday repeatedly asked questions about benefits, but there was no witness present from the Veterans Benefits Administration to answer them.

"I am deeply ... angry that the VA chose to stay all of these Blue Water Navy Vietnam veteran claims until the last possible minute," Blumenthal, said. "VA has no excuse for failing to move forward."

Blumenthal asked VA why it stayed all the claims. Hastings said she could not answer that question.