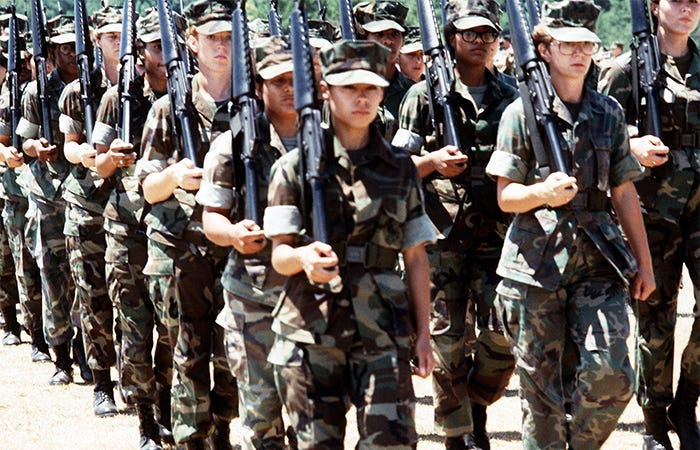 Women veterans told lawmakers on Capitol Hill that the Department of Veterans Affairs has not communicated well during the coronavirus pandemic.

In an online forum Tuesday held by the House Women Veterans Task Force, women veterans who are now researchers, veteran service organization staff and more told Congress members about the challenges female former service members face, and that they worry VA's focus on the pandemic could push those issues aside.

They recognized VA's efforts to improve and expand telehealth appointments and mental health check-ins, but said they were concerned about ongoing issues that could fall by the wayside in the wake of the crisis.

Those issues include gender or sexual harassment at VA hospitals and clinics, not enough staff trained to help women, lack of childcare, a lack of data keeping track of issues women vets face and service discrepancies from one VA hospital to the next.

Dr. Patty Hayes, chief consultant for the VA Office of Women's Health, told the veterans and lawmakers VA has worked to reach women over the course of the pandemic, expansions in telehealth for mental health and other appointments as well as intimate partner violence resources.

Advocates told lawmakers women veterans are facing increasing isolation during the pandemic and are struggling to access VA resources.

"This is the time to over-communicate, not go radio silent," said Coast Guard veteran Tammy Barlet who now serves as associate director of the Veterans of Foreign Wars' national legislative service.

In general, VA representatives told veterans and lawmakers they lacked data so far on women veterans seeking resources and services from the department during the pandemic.

It's also unclear how many women veterans have been affected by the virus itself since VA is not releasing any demographic data about the more than 12,600 positive cases its had or the 1,082 deaths as of Wednesday.

The women veterans said VA isn't doing enough to reach women veterans and meet their needs during the crisis -- problems, they said, which existed before the pandemic and will likely continue after.

Rep. Julia Brownley, D-Calif., chairwoman of the Women Veterans Task Force, said women "remain historically under-served and under-resourced and we want to change that ... when women leave the military and become veterans, more barriers remain, including to their health care ... times of crisis, such as global pandemics, exacerbate many of these challenges, including inequities in systems of support."

Women veterans are less likely than men to seek care at VA, and advocates say that's due at least in part to gender and sexual harassment by male veterans at VA hospitals and clinics.

"Prior to the current public health crisis, many women veterans chose to delay or miss care because of sexual harassment at VA facilities," Brownley said. "This is unacceptable."

Hayes said VA has not found that other healthcare systems have "quite the challenge VA has" when it comes to harassing behavior from other patients. Hayes put at least part of the blame on military culture carried over from service.

One change that could help women veterans may be born of the isolation required during the pandemic itself.

Jennifer Silva, an Army veteran and chief policy officer at Wounded Warrior Project, said before the pandemic, women made up about 17 percent of the veterans who participated in WWP programs. Now that most of those programs have moved online, women make up 44 percent, Silva told lawmakers.

She said WWP has found it's easier for women to participate in virtual programs than to go to appointments or events, at least partly because they don't have to find childcare while they travel. Women veterans are more likely to be single parents than male vets.

"There are lower barriers," Silva said. "There are some things that are missed (with online programs) but it's easier to join ... There's some real goodness in this virtual world. They don't have to coordinate their whole life around it."

Now, Silva said WWP plans to offer up to a quarter of its programs virtually moving forward to help reach veterans for whom that's an easier option, including women.

'We don’t de-program you as well as we could,' senior women leaders on veteran transition