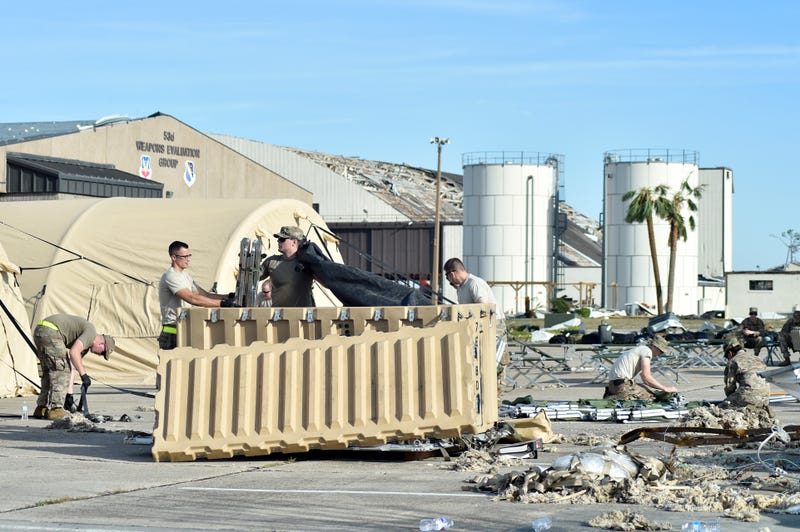 Airmen from the 821st Contingency Response Group set up tent city at Tyndall Air Force Base, Florida, Oct. 12, 2018. The contingency response team deployed to assess damage and establish conditions for the re-initiation of airflow, bringing much needed equipment, supplies and personnel for the rebuilding of the base in the aftermath of Hurricane Michael. Air Mobility Command equipment and personnel stand by across the nation to provide even more support upon request. Photo credit (U.S. Air Force photo by Tech. Sgt. Liliana Moreno)
By Elizabeth Howe, Connecting Vets

The Department of Defense officially announced Wednesday they would stand behind President Joe Biden's efforts to combat climate change and will now consider it "an essential element of our national security," Secretary of Defense Lloyd Austin said in a statement this week.

The Pentagon will "assess the impacts of climate change on our security strategies, operations, and infrastructure," Austin continued.

An executive order signed by Biden on Jan. 27, in part "putting the climate crisis at the center of United States foreign policy and national security."

"The United States will work with other countries and partners, both bilaterally and multilaterally, to put the world on a sustainable climate pathway," the executive order reads. "The United States will also move quickly to build resilience, both at home and abroad, against the impacts of climate change that are already manifest and will continue to intensify according to current trajectories."

Austin's statement of support was released shortly after the order was signed.

In 2019 alone, the Department of Defense assessed climate-related impacts to 79 installations located in every geographic combatant command area of responsibility, Austin's statement added. A March 2019 Pentagon report found the military's base infrastructure is at significant risk of recurrent flooding, drought, desertification, wildfires and thawing permafrost. The report was ordered after Tyndall Air Force Base in Florida was all but leveled by a hurricane in October 2018. A year after the storm, the installation was still being rebuilt.

"Every year, we see the consequences of increasing incidents of flooding, drought, wildfires and extreme weather events on our installations at home," Austin said. "Every year, our commanders and their allies and partners conduct operations that result from instability in societies strained by desertification, the threat of adversary access to homelands through the Arctic, and the demands for humanitarian assistance worldwide

"We know first-hand the risk that climate change poses to national security because it affects the work we do every day," the Defense secretary added.

In accordance with Biden's order, the DoD will "immediately take appropriate policy actions." Climate change security implications will be included in future risk analyses, strategy development and planning guidance. It will also be included in modeling, simulation, wargaming, analysis and the next National Defense Strategy. Moving forward, the DoD will also strive towards positive change for its own carbon footprint by developing climate-friendly technologies.

"There is little about what the department does to defend the American people that is not affected by climate change. It is a national security issue, and we must treat it as such," Austin said.