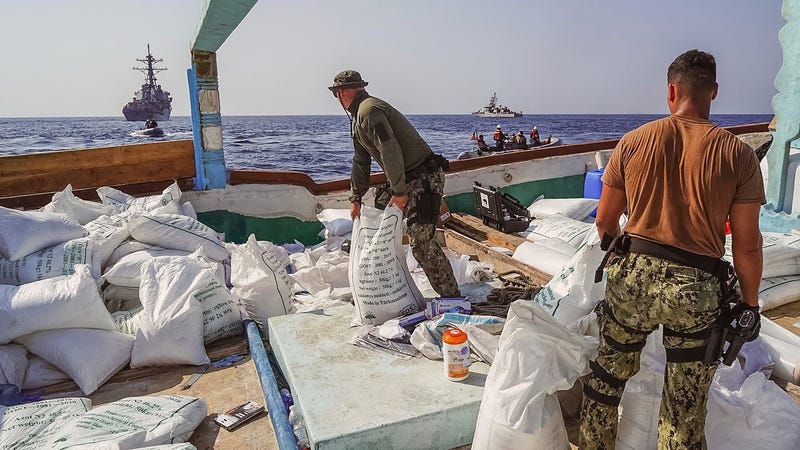 In this photo released by the U.S. Navy, sailors inventory urea and ammonium perchlorate found on a dhow intercepted in the Gulf of Oman on Nov. 9, 2022 Photo credit Sonar Technician 1st Class Kevin Frus/U.S. Navy via AP
By The Associated Press

The U.S. Navy said Tuesday it found 70 tons of a missile fuel component hidden among bags of fertilizer aboard a ship bound to Yemen from Iran, the first-such seizure in that country's yearslong war as a cease-fire there has broken down.

The Navy said the amount of ammonium perchlorate discovered could fuel more than a dozen medium-range ballistic missiles, the same weapons Yemen's Iranian-backed Houthi rebels have used to target both forces allied to the country's internationally recognized government and the Saudi-led coalition that supports them.

The apparent rearming effort comes as Iran has threatened Saudi Arabia, the United States and other nations over the monthslong protests calling for the overthrow the Islamic Republic's theocracy. Tehran blames foreign powers — rather than its own frustrated population — for fomenting the protests, which have seen at least 344 people killed and 15,820 people arrested amid a widening crackdown on dissent there.

“This type of shipment and just the massive volume of explosive material is a serious concern because it is destabilizing,” Cmdr. Timothy Hawkins, a spokesperson for Navy’s Mideast-based 5th Fleet, told The Associated Press. “The unlawful transport of weapons from Iran to Yemen leads to instability and violence.”

A United Nations arms embargo has prohibited weapons transfers to the Houthis since 2014. Iran's mission to the United Nations told the AP early Wednesday that it “adheres” to the ban, even as it has long been transferring rifles, rocket-propelled grenades, missiles and other weaponry to the Houthis via the sea. 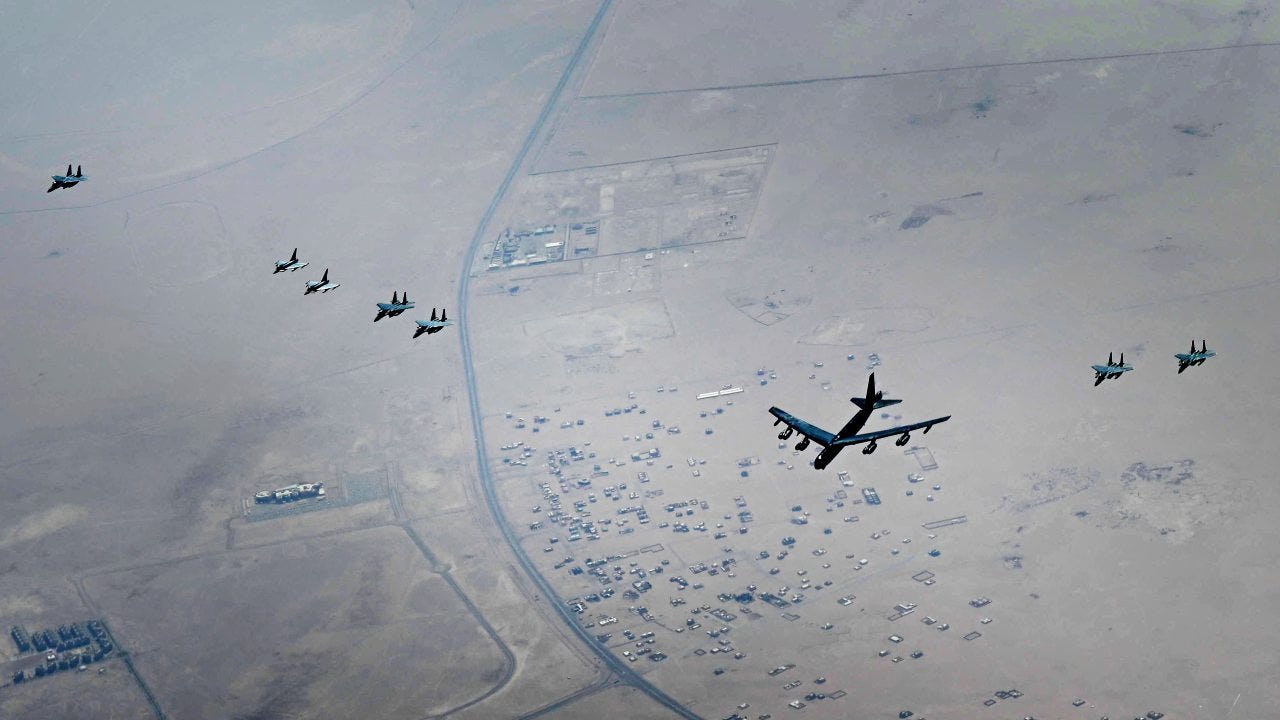 “It is Iran’s goal to restore the cease-fire as soon as possible and to establish peace and stability in Yemen by creating dialogue between Yemeni groups,” the Iranian mission said.

The Houthis did not respond to requests for comment.

The U.S. Coast Guard ship USCGC John Scheuerman and guided-missile destroyer USS The Sullivans stopped a traditional wooden sailing vessel known as a dhow in the Gulf of Oman on Nov. 8, the Navy said. During a weeklong search, sailors discovered bags of ammonium perchlorate hidden inside of what initially appeared to be a shipment of 100 tons of urea.

Urea, a fertilizer, also can be used to manufacture explosives.

The dhow was so weighted down by the shipment that it posed a hazard to nearby shipping in the Gulf of Oman, a route that leads from the Strait of Hormuz, the narrow mouth of the Persian Gulf, out to the Indian Ocean. The Navy ended up sinking the ship with much of the material still on board due to the danger, Hawkins said.

The Sullivans handed over the four Yemeni crew members to the country's internationally recognized government Tuesday.

Asked how the Navy knew to stop the ship, Hawkins only said the Navy knew through "multiple means" that the vessel carried the fuel and that it came from Iran bound for Yemen. He declined to elaborate. 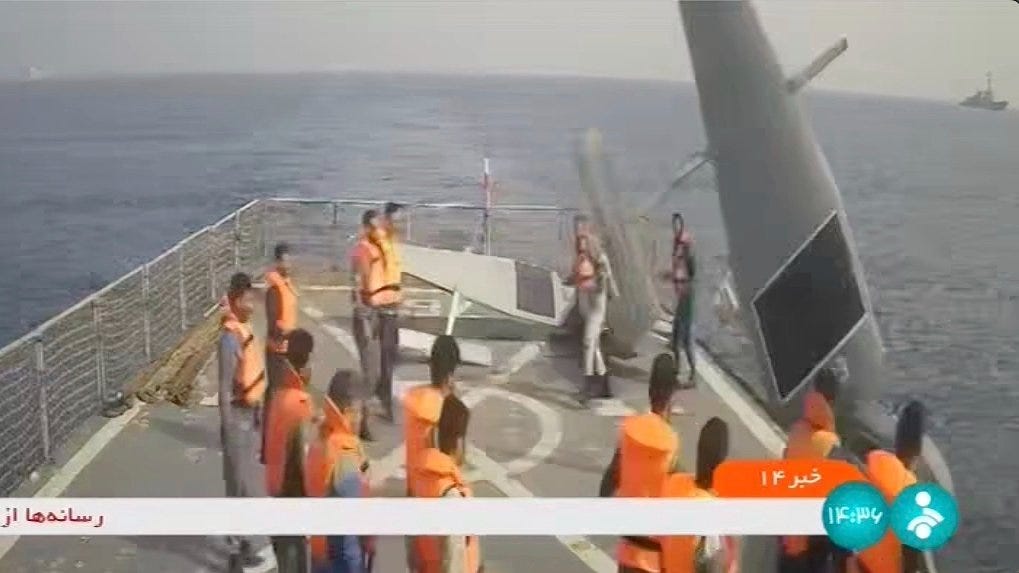 “Given the fact it was on a route usually used to smuggle illicit weapons and drugs from Iran to Yemen really tells you what you need to know,” Hawkins said. “It clearly wasn’t intended for good.”

The Houthis seized Yemen’s capital, Sanaa, in September 2014 and forced the internationally recognized government into exile. A Saudi-led coalition armed with U.S. weaponry and intelligence entered the war on the side of Yemen’s exiled government in March 2015. Years of inconclusive fighting has pushed the Arab world’s poorest nation to the brink of famine.

A six-month cease-fire in Yemen's war, the longest of the conflict, expired in October despite diplomatic efforts to renew it. That's led to fears the war could again escalate. More than 150,000 people have been killed in Yemen during the fighting, including over 14,500 civilians.

There have been sporadic attacks since the cease-fire expired. In late October, a Houthi drone attack targeted a Greek cargo ship near the port city of Mukalla, causing no damage to the vessel. 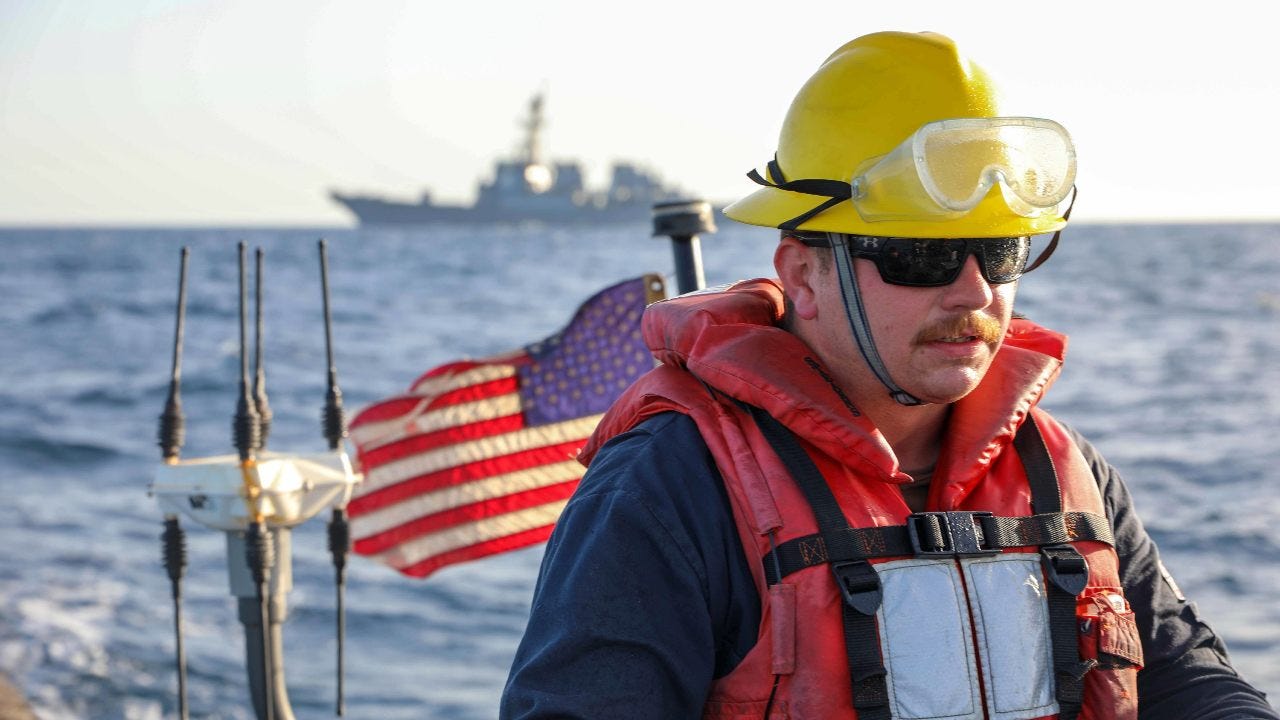