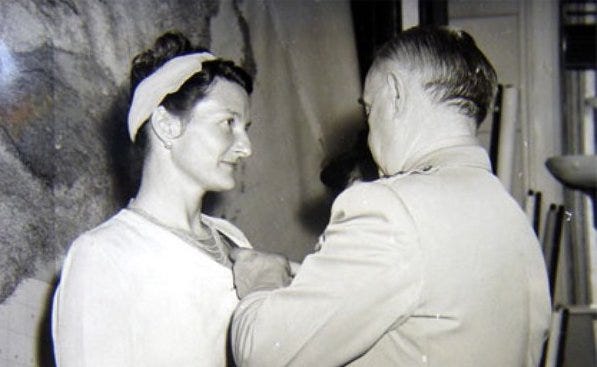 The Office of Strategic Services (OSS) was the predecessor to today's CIA and Special Forces, created as a paramilitary intelligence unit that could help defeat the Axis powers. Led by William Donovan, the organization famously set out to recruit "Ph. Ds who can win a bar fight" resulting in the OSS being filled with many colorful characters. Few, if any, were as colorful or interesting as an unlikely spy named Virginia Hall.

Born into an affluent family in Baltimore in 1906, Hall could have lived a privileged life but seemed to have a rebellious streak in her personality. She was highly educated, having studied at Radcliffe and Barnard (the all women's schools connected with Harvard and Columbia) before completing her graduate work at schools in France, Austria and Germany where she focused on learning French, Italian, and German as her ambition was to join the State Department and become a diplomat.

Her applications were rejected, and at that time there were only a small handful of female ambassadors, however, she was hired on as a clerk. An avid hunter, she accidentally shot herself in the foot while bird hunting in Turkey. The wound led to gangrene, which in turn led to amputation. Prosthetic limbs were not what they are today and her clunky wooden leg caused her to have a gait which later led to her nickname, the "limping lady."

Meanwhile, dominos were falling across Europe. Germany and France would soon be at war. Hall dealt herself into the action as an ambulance driver in France until the government capitulated to the Nazis and she escaped to Britain. It was a chance encounter with a British intelligence officer on a train which led to her recruitment by the Special Operations Executive (SOE).

Hall was the only female graduate from her SOE training course and was inserted into France in 1941 with the cover story that she was a reporter from The New York Post.

Hall began sending intelligence reports back to the SOE, aiding downed pilots to return to friendly lines, and building a resistance network. Her work was so effective that the head of the Gestapo, infamous war criminal Klaus Barbie, was attempting to hunt her down and infiltrate her network. Occupied France was a deadly place for spies and many intelligence officers and their sources ended up tortured and killed. Hall remained as long as she could, for over a year in France, before she escaped by walking overland into Spain during the winter.

Back in Britain she turned down a number of awards as she wasn't in the intelligence game for accolades and sought out ways to get back into the action. As fate would have it, the Americans were standing up their own version of the SOE, called the Office of Strategic Services. Hall signed up and was re-inserted back into France in 1944, this time disguised as an old lady. She had even gone as far as to have her teeth filed down to appear as a French milkmaid.

In the run up to D-Day, Hall ran sabotage and espionage operations, facilitating clandestine airdrops, seizing key bridges, planning ambushes and growing a resistance network that was 1,500 strong.

After the war, Hall joined the newly formed Central Intelligence Agency but never found desk work particularly satisfying. After the war, some of the old gender norms returned and she was never again permitted to engage in fieldwork.

She was honored for her work, with William Donovan pinning on her Distinguished Service Cross, the only member of the audience being her mother. Relatives said she never talked about the war, and she hoped to maintain her cover in case the opportunity for fieldwork ever presented itself. Hall was a quiet professional, but this also led to her bravery being unknown outside of a very small circle in the intelligence community.

Today, 40 years after her passing, this seems about to change. A handful of books have been published about Hall titled "A Woman of No Importance," "The Women with the Wooden Leg," "The Wolves at the Door," "The Lady is a Spy," and "Hall of Mirrors." There is also a feature film in the works, set to star Hollywood actress Daisy Ridley as Virginia Hall.

It may have taken 70 years, but the woman who inspired so many behind closed doors in the intelligence community will now have her story told to the broader public and an entirely new generation.