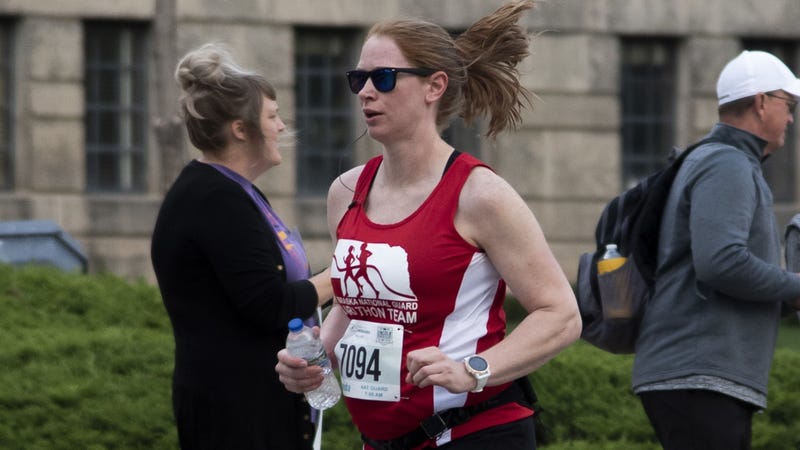 Maj. Amanda Schmid, a helicopter pilot and full-time administrative officer with the Nebraska Army National Guard's 1-376th Aviation Battalion, runs the Lincoln half-marathon in Nebraska, May 2, 2021. This is the second time Schmid has run in the marathon while pregnant. Photo credit Senior Airman Jamie Titus/US Army
By Army.mil

Serving in the National Guard, raising a family, and keeping up a marathon training regimen would be a lot to manage under normal circumstances. Still, two women in the ranks have managed to do all of the above while preparing for the arrival of new babies.

Maj. Amanda Schmid of Nebraska and 1st Lt. Brittany Downs of Ohio decided to continue training with the National Guard marathon program during their pregnancies. Both women represented their states alongside their fellow Guard marathoners competing in the 2021 Lincoln Marathon and Half-Marathon held in Lincoln, Nebraska, May 2.

For Schmid, a helicopter pilot serving full-time as the administrative officer for the Nebraska Army National Guard’s 1-376th Aviation Battalion, it was her second time running in the Lincoln half-marathon while pregnant.

Knowing that her pregnancy would be about eight months along when the race kicked off, Schmid decided that it was important for her overall health to continue her running passion.