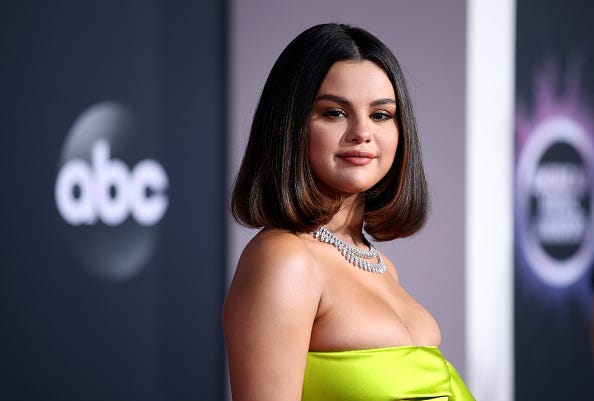 Selena Gomez commemorated her return to the stage in a permanent way.

After performing for the first time in two years by opening the American Music Awards, the 27-year-old celebrated by flaunting her new upper thigh tattoo on Instagram.

The religious-themed ink features a pair of prayer hands clasped together holding onto rosary beads and sits at the top of her left leg.

Bang Bang later shared more images from the session and included the note: “For the wonderful @selenagomez thank you for the trust 💌 #housecall”

For the wonderful @selenagomez thank you for the trust 💌 #housecall

While this is reportedly the “Hands to Myself” singer’s 14th tat, many fans were quick to point out it looks similar to one her ex Justin Bieber has on his ankle. The Bieb’s version is much larger and only features the prayer hands, which isn’t exactly a rare choice for body art.

It was a big night for Gomez as she returned to the awards show stage to perform her two latest hits “Lose You to Love Me” and “Look At Her Now.”

The numbers were met with mixed reviews as fans oscillated between praise for her triumphant reemergence, while others thought she seemed a bit shaky.

#SelenaGomez kicks off the #AMAs with an emotionally charged performance pic.twitter.com/qvSANpuSGM

It seems Gomez was quite anxious as she reportedly suffered a panic attack right before hitting the AMA stage.

“She definitely had a panic attack. She was nervous.” a source told People. “She did sound better at rehearsal.”

Regardless, the pop diva is riding a wave of success as “Lose You to Love Me” became her first #1 song on the Billboard Hot 100 chart.

Gomez is set to release her as-yet-untitled third solo album on January 10th.