The second team to appear on HBO's "Hard Knocks" docuseries, profiling the an NFL team's training camp leading into a season, was the Dallas Cowboys back in 2002. Six years later, they became the team in focus on the show's fourth season, and the first organization to appear on the show twice. And nearly 20 years later, they're in a position that leaves them susceptible to becoming the first "Hard Knocks" three-peat in the show's history.

They're not alone, though, seeing as four other teams meet the requirements needed to put them in that same position. An NFL team can be forced into appearing on the show by the league and HBO, given that it:

The four other teams who fit the bill this year, along with the Cowboys, are the Broncos, Cardinals, Giants and Panthers (via Awful Announcing). Joe Lucia of Awful Announcing broke down the teams he think would make for the best story lines in late February, putting the Cardinals at number one thanks to the star power of Kyler Murray and DeAndre Hopkins and the very real possibility that they are a contending team this year.

And that was before J.J. Watt joined the picture. 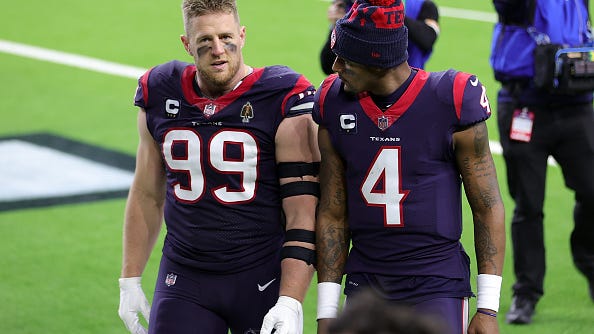 Watt and Hopkins are not only former teammates but also former stars of "Hard Knocks," as they were both established names in the pre-Deshaun Watson era of Texans football heading into the 2015 season. Following HBO's documenting of their preseason, Watt went on to wreak havoc, recording a league-high 17.5 sacks en route to his fourth straight All-Pro season. Hopkins didn't do so badly himself, turning in his first Pro Bowl campaign with 111 catches, 1,521 yards and 11 touchdowns despite a less-than-stellar QB battle between Brian Hoyer, Ryan Mallett and the rest of that exciting Houston QB crew.

If the Cardinals are chosen, maybe we'll see some of that success... but we'll probably see that success regardless of whether or not they're the team that gets selected. The Cowboys could be very interesting as well, depending on the outcome of their quarterback situation. Saquon Barkley and Christian McCaffrey both have a return to stardom in mind for the 2021 campaign, making them likely focal points should their respective teams be chosen. The Broncos, as of now, don't have much to flaunt, but it's still early in the offseason and they're currently FanDuel's front-runners to land him in a trade.

But the team that will appear won't necessarily be one of these five. Last season, the five organizations that met the criteria were the Cardinals, Broncos, Lions, Jaguars and Steelers, but we were instead treated to an inside look at how the Rams and Chargers prepared for their SoFi Stadium debuts against all odds during the COVID-19 pandemic.