Dak Prescott calmed Cowboys fans' fears after having a stellar performance in the team's Wild Card win over the Buccaneers. But all hope in the Cowboys quarterback was dashed away when Prescott's poor play reared its ugly head again on Sunday afternoon in Santa Clara.

Prescott threw two interceptions and almost threw at least one more in the team's 19-12 loss to the 49ers in the Divisional Round of the playoffs.

After the game, Cowboys owner and general manager Jerry Jones said he wasn't concerned about his quarterback and looks forward to him getting another crack at ending the team's 27-year Super Bowl drought in next year's postseason.

"Give me that setup, with Dak Prescott, I feel very strongly that we will win,'' Jones said. "My (commitment to Dak) is just as strong as ever. ... I take (my chances with him) again and again and again."

Prescott, who tied Texans quarterback Davis Mills for the most interceptions thrown in the NFL during the regular season with 15, took responsibility for failing to protect the football this season after tossing two more interceptions on Sunday.

This is the third time Prescott has come up short in the Divisional Round, bringing his playoff record to 2-4 in his seven NFL seasons. After the loss, the quarterback was asked what has to change for the team to take that next step in the postseason, and he said the organization's success starts with him.

When asked about the confidence the owner and general manager has in him putting the Cowboys in a position to win a Super Bowl again next season, the quarterback said he believes they'll be right back in the thick of things come this time next year. 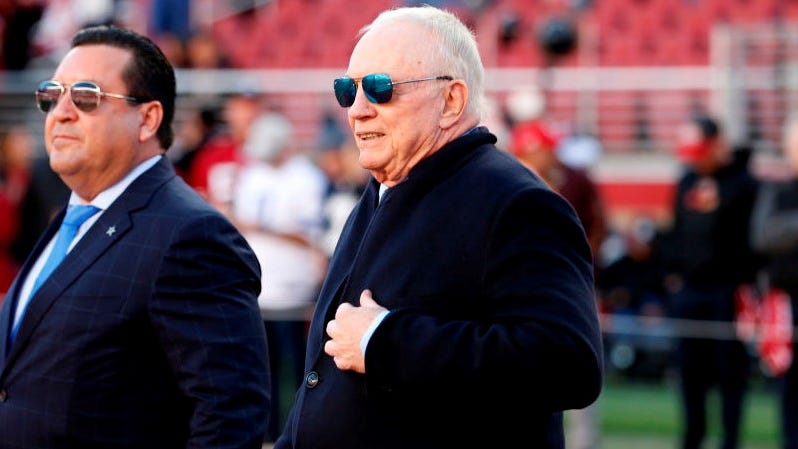