The 49ers are seven practices deep into training camp and the guys are probably starting to get tired of each other. During Tuesday’s session in Santa Clara, coach Kyle Shanahan briefly had to stop practice to bring the team together after two scuffles broke out between wide receiver Brandon Aiyuk and middle linebacker Fred Warner.

Perhaps we should have seen it coming. Last week, Aiyuk told reporters that Warner was “irritating” to practice against. Warner admitted he’s been a bit rough on Aiyuk through his first two-plus years on the Niners. This type of in-team competition is nothing new and training camp scuffles are an annual thing.

From all indications, Aiyuk is growing up this season. After spending part of his summer in San Diego working out and relaxing with Trey Lance, the young are growing great chemistry.

“I love to see BA fight… We need that every day.”

"I feel he's having the best camp of everyone on the team offense & defense. OK, besides Bosa. Bosa gonna be Bosa." 👀 pic.twitter.com/u6L1trykia

The veteran safety is clearly impressed by Aiyuk’s growth from Year 2 to Year 3.

“He’s got the fight in him,” Ward said. “I love to see him fight. He’s an aggressive guy. But we just need that every day. Right now he’s had an outstanding camp. I feel like he’s having the best camp out of everybody on the team – offense and defense. OK, besides (Nick) Bosa. Bosa gonna be Bosa. But I’m saying, B.A. is taking it to another level, it’s crazy. I didn’t win no 1-on-1 with him battle yet. I wanna say last year there was a couple reps that I won against him. But not this year.”

Check out this 1-on-1 battle from Monday’s practice for proof.

Back in the lab.

It’s not just Warner who likes to poke and prod Aiyuk to get more out of him. Ward said Shanahan singles him out in film sessions, too.

That sounds similar to what Warner told reporters last week.

“I chose him out,” Warner said. “I think he's ready to make that next step into playing at an elite level, right? Ever since he's gotten here in the last couple years, I've kind of gotten after him a little bit, going around the locker room and around the building because I know how much he has in him.

“I know if I nag him a little bit he's going to get sick and tired of that and kind of hold his own. And so I like what I see out of B.A. He works super hard, and he's starting to really gain that mindset of knowing that he's the guy and he's capable. I'm just trying to get the best out of him.”

On Wednesday, David Lombardi of The Athletic shared snapshot from Aiyuk's Instagram Story, where he wrote to Ward, "Always love (100 emoji). Respect me ima respect you! Try and lil bro me we gone have issues. BIG (dog emoji)."

If you need a Gen Z translator, Aiyuk is thanking Ward for his respect while saying people who come at him are gonna "have issues" ... AKA Warner?

Regardless, both Aiyuk and Warner are performing at a high level right now. The 49ers could care less about the spat if that continues pic.twitter.com/EUO1acdC85

After starting the 2021 season in Shanahan’s dog house, Aiyuk got more reps and finished with 56 catches for 826 yards and five touchdowns. His rookie year out of Arizona State in 2020, Aiyuk caught 60 receptions for 748 yards and five scores. The shiftiness, route running, hands, toughness and footwork are all there for Aiyuk to be a 1,000-yard receiver this year.

Aiyuk, 24, figures to be the No. 2 receiver behind Deebo Samuel, who led the NFL with 18.2 yards per reception last year. Combined with tight end George Kittle, second-year quarterback Trey Lance, 22, is surrounded by talent in the passing game.

Ward also gave insight into Lance’s development as a leader.

“He’s responding great. He has a great attitude. He’s hear early, he leaves late. He bounces back, makes plays against us. Looks us right in the eye like a man. I respect his game.” 💪

Jimmie Ward on what he’s seen from Trey Lance & their interactions as locker mates pic.twitter.com/ICqN6GSzYb

“He’s responding great,” Ward said. “Has a great attitude, he’s here early, he leaves late. He bounces back, makes plays against us, looks us right in the eye like a man. I respect his game. He’s my locker mate, so we talk everyday. If I get him on a play, he’ll come ask me, like what defense I was playing in or, ‘What made you bite on this route. What made you not go to this area’ We chop it up like that. We try to make each other better.” 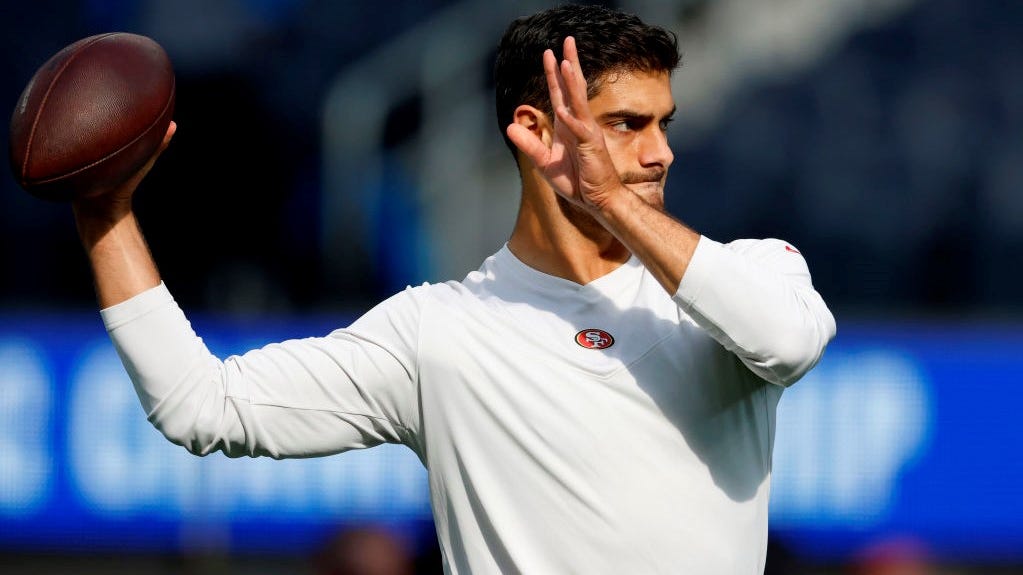 WATCH: Jimmy Garoppolo throws on side field at 49ers practice