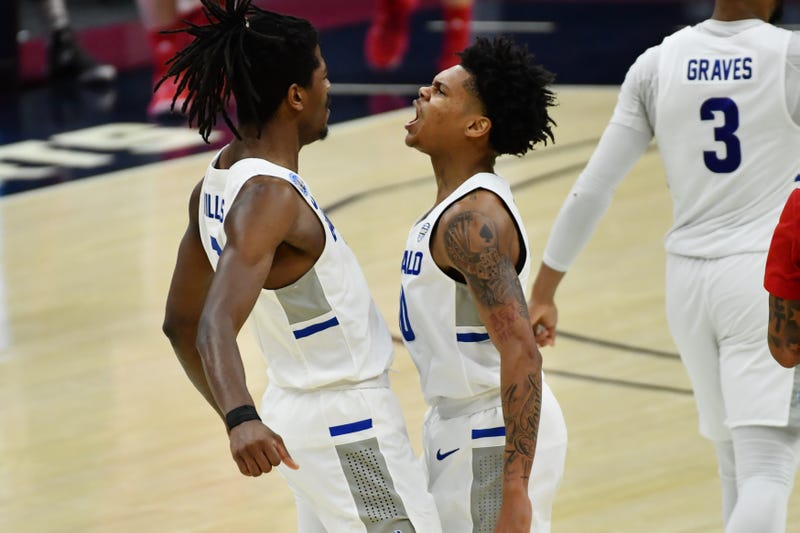 The University at Buffalo men’s basketball team is moving on in the Mid-American Conference Tournament after defeating Miami (OH), 74-63, in the quarterfinals Thursday evening in Cleveland, Ohio. With the victory, the Bulls are now on a six-game winning streak, and have won nine of their last 10 games.

UB, the No. 2 seed in the MAC Tournament, had already beaten the No. 7 seed Redhawks twice in the regular season. However, Miami upset the Bulls in the first round of last year’s tournament as a No. 12 seed, putting an end to Buffalo’s 2019-20 campaign.

The Bulls showed early on in Thursday’s matchup that they weren’t taking their lower-seeded opponent lightly. Buffalo went into the locker room at halftime with a 40-32 advantage, leading by as much as 11 points in the first 20 minutes.

Through the first 10 minutes of the second half, the Bulls managed to hold a comfortable, multi-possession lead. A Jeenathan Williams three-point field goal put the Bulls in front, 53-40, with 11:16 to play.

Facing a 13-point deficit, its largest of the game, Miami turned things around at the midway point of the half. A three-pointer from Dalonte Brown, followed by a layup from Precious Ayah, cut the Redhawks deficit to eight points with 8:32 left. The back-to-back baskets marked the beginning of a 16-4 run for Miami. After making a layup and drawing a foul in the process, Ayah knocked-down a free throw to make it a one-point game, 59-58, Bulls, with 4:45 left.

On the ensuing possession, Ronaldo Segu drilled a three to put the Bulls back up four points, and spark a 7-0 UB run.

Miami managed to pull back within six points, but the Bulls held strong down the final stretch. Williams provided the final dagger, hitting a three-pointer to extend the Buffalo lead to 71-60 with 1:10 to go.

Williams and Segu combined for 10 of the Bulls' season-high 12 three-pointers, with each of them making five, a career-high for both. Williams and Segu were two of four Bulls to finish in double figures, scoring 20 and 16 points respectively. Segu also dished-out a game-high six assists.

Josh Mballa led UB in scoring with a game-high 23 points. Fresh off being named the MAC Defensive Player of the Year, the junior forward also grabbed a game-best 19 rebounds, tying a career-high.

Jayvon Graves finished with 13 points for UB. The senior struggled from the field, shooting just 2-for-8. However, Graves did have a successful night from the free throw line, making eight shots on nine attempts.

The Bulls defeated Akron on March 2, 80-78, in the lone regular season matchup between the two schools.

Friday's game between Buffalo and Akron will be televised on CBS Sports Network. You can also listen to the game, along with pregame and postgame coverage, on ESPN 1520.