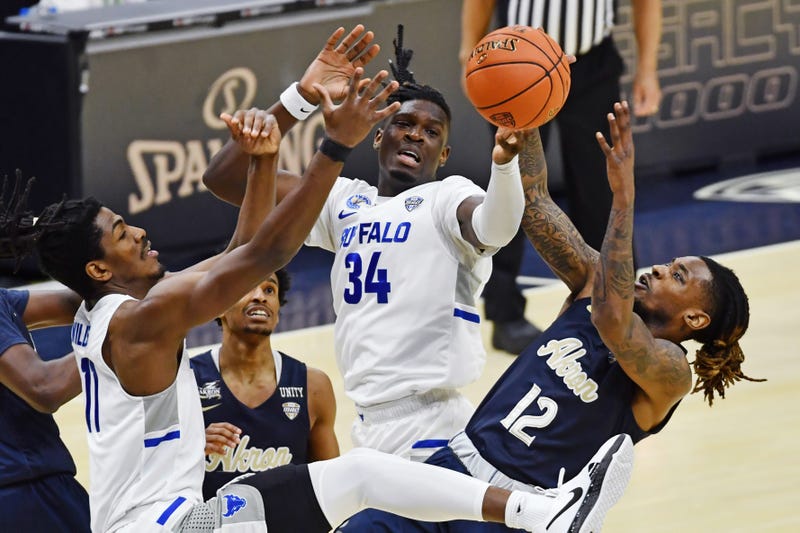 The University at Buffalo men’s basketball team is headed to the Mid-American Conference Tournament championship game following an 81-74 overtime victory over Akron on Friday night in the semifinals.

The No. 2 seed Bulls jumped out to a 10-point lead in the first eight minutes of play and held a 33-28 advantage at halftime. The score remained close in the second half, with the No. 3 seed Zips and UB trading baskets and exchanging figurative punches throughout the final 20 minutes of regulation.

Down one with under two minutes left in the second half, a Ronaldo Segu three-pointer, followed by a Jeenathan Williams steal-and-layup gave the Bulls a 68-64 edge with 1:02 left. Akron’s Bryan Trimble Jr. responded with a layup of his own, cutting the UB lead to two points with under a minute to play.

With a chance to put the Bulls back up multiple possessions, UB guard Jayvon Graves was called for a charge while driving to the basket, giving the Zips the ball with 16 seconds on the clock.

Akron missed on its first shot attempt in the final seconds; but Enrique Freeman grabbed the offensive rebound and put it back in, tying the game at 68-68, and sending it to overtime.

Momentum quickly swung the Bulls’ way at the start of the extra period. Buffalo started overtime on a 7-0 run, taking a 75-68 lead with 2:35 left on a three-pointer from Williams, who scored seven points in overtime. The seven-point advantage was the Bulls’ largest lead since the 8:30-mark of the first half.

The Zips were able to cut the deficit back to five points, but couldn’t close the gap any further. UB out-scored Akron 13-6 in overtime.

Williams led all Buffalo scorers with 26 points, just two shy of matching a career-high. The junior forward shot well from behind the arc for a second consecutive night, making three-of-four attempts from three-point range. Williams also led the Bulls with four takeaways, while also tying for a team-lead in assists with four, and adding five rebounds.

Just behind Williams in the scoring department were fellow juniors Segu and Josh Mballa, who finished with 18 and 16 points respectively. Segu matched Williams with team-high four assists; and, similar to Williams, knocked-down a trio of three-point shots.

Mballa, the 2021 MAC Defensive Player of the Year, set a career-high with 20 rebounds, grabbing nine at the offensive end, also a career-best. Through two games in this year’s conference tournament, Mballa has pulled down a total of 39 rebounds. The junior’s 20 rebounds also tied a MAC record for most in a single game.

Graves had another quiet performance shooting-wise, going 5-for-14 from the field, but still played a solid game nevertheless. The senior finished with 12 points, while also adding nine rebounds, three assists, a pair of blocks, and a steal. However, Graves moved into ninth place on Buffalo's all-time scoring list, and is now up to 1,411 career points.

With the victory over Akron, the Bulls are now on a seven-game win streak, and will be riding into the MAC Championship with 10 victories in their last 11 contests.

A victory in the MAC Championship would also give Buffalo its fifth conference title in six years (not including 2020), and the first under head coach Jim Whitesell, who took over after the end of the 2018-19 season.

The Bulls will take on the No. 5 seed Ohio Bobcats in the tournament final Saturday night. Ohio upset No. 1 seed Toledo on Friday afternoon, 87-80, to advance to its first MAC Championship since 2013.

Buffalo and Ohio met twice in the regular season. The Bulls and Bobcats each stole games on the road, with Ohio winning in Buffalo, 76-75, back on Jan. 29. However, the Bulls returned the favor, blowing-out the Bobcats in Athens, 86-66, on Feb. 27.

Opening tip-off between UB and Ohio is scheduled for 7:30 p.m. EST on Saturday, Mar. 13. The MAC Tournament Championship will be televised on ESPN2. You can also listen to the game, along with pregame and postgame coverage, on ESPN 1520.