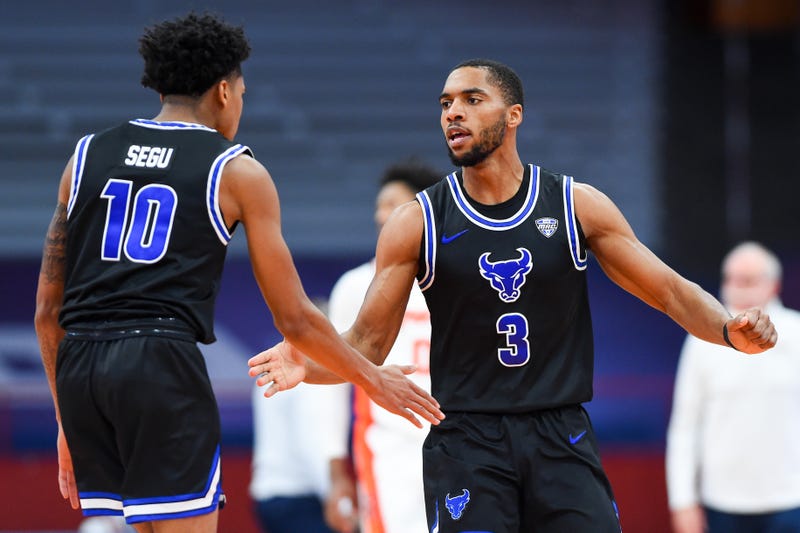 The University at Buffalo men’s basketball team is gearing up for the Mid-American Conference Tournament, which begins on Thursday afternoon in Cleveland, Ohio.

Only the top-eight teams in the regular season qualified for the MAC Tournament this season. The conference elected to jump right to the quarterfinals, putting all of the teams in one location, as opposed to playing first round games at multiple arenas, or having all 12 programs in the league travel.

Buffalo may be playing its best basketball all year, as the group heads to Cleveland. The Bulls are currently on a five-game win-streak, and are 8-1 in their last nine contests, with the lone loss being to Toledo, the No. 1 seed in the MAC.

UB has also played well in its previous meetings with Miami this year. The Bulls swept the regular season series, first defeating the Redhawks on the road, 90-62, back on Dec. 15, and then again at home on Feb. 6, 88-64.

There’s always that old cliché: “It’s hard to beat the same team three times in one season,” so it’s safe to assume the Bulls won’t take Miami lightly in this win-or-go-home scenario. However, the Redhawks upset UB in last season’s tournament as the No. 12 seed, knocking of the No. 5 seed Bulls at Alumni Arena, ending Buffalo’s season.

Despite the poor recent history with Miami (OH), the Bulls have played very well in the MAC Tournament over the last few years. UB has won 11 of its last 12 games at Rocket Mortgage Fieldhouse, previously known as Quicken Loans Arena. Buffalo, as the 2019 winners, are also still the defending tournament champions with last year’s tournament being canceled due to the COVID-19 pandemic.

Bulls guard Jayvon Graves enters the conference tournament as the reigning MAC Player of the Week. The senior registered his first-career triple-double in an 80-78 victory over Akron on March 2, finishing with 13 points, 10 rebounds, and a game-high 11 assists.

Graves, averaging 14.6 points per-game this season, is just 17 points shy of moving into ninth place in program history for all-time scoring. He currently has 1,386 career points. Graves will also play in his 128th game with the Bulls, tying him for fourth all-time.

Buffalo forward Josh Mballa, a transfer from Texas Tech in 2019, has been another impact player for the Bulls all season. Recently named the MAC Defensive Player of the Year, Mballa led the team (and conference) in rebounds per-game (9.9) and was second on the Bulls in scoring (15.1 points per-game) in the regular season. A nightly threat to post a double-double, the junior accomplished the feat six times this year, while also posting double-digit points and nine rebounds four times.

Mballa was also placed on the All-MAC Second Team recently, along with two Bulls teammates, Graves and Jeenathan Williams.

Williams and fellow junior Ronaldo Segu round out the team’s leadership group. Williams averaged a team-high 17.3 points per-game in the regular season and finished as Buffalo’s leading scorer in eight games, the most out of any Bulls player. Segu, who took on a starting role for the first time in his UB career this season, averaged a career-high 12.7 points and a team-best 4.4 assists per-game (a team-best), while also reaching career-high totals in field goal percentage, three-point shooing percentage, minutes per-game, and rebounds.

In most cases, the MAC is a one-bid league when it comes to getting teams into the NCAA Tournament. The conference tournament championship is a must-win if UB wants to return to the "Big Dance." UB has won four of the last five MAC Tournaments, earning trips to the NCAA Tournament in 2015, 2016, 2018, and 2019. A fifth title in seven years (and six tournaments) would be quite an accomplishment, if UB can win three-straight games in Cleveland at the end of this week.

The MAC Tournament quarterfinal matchup between Buffalo and Miami (OH) is scheduled to tip off at 4 p.m. EST on Thursday. The game will be broadcasted on ESPN 1520, along with pregame and postgame coverage.

For Buffalo head coach Jim Whitesell, who was an associate head coach with the four previous NCAA Tournament-bound teams from UB in recent years, this will be his first trip to Cleveland as the Bulls' bench boss.

Whitesell took some time on Wednesday to join Howard Simon and Jeremy White on WGR. He talked about the Bulls’ strong end to the regular season, the upcoming matchup with Miami (OH), having more experience as a group this year, and more.

Whitesell on the team’s play heading into the MAC Tournament:
“Each week it seems like we’ve gotten better, and that’s kind of our challenge again this week, we have to get better. ... We’re healthy. We’re ready to go.”

Whitesell on Buffalo’s approach to Miami and if prior, recent matchups affect the gameplan:
“We’re big on owning our mistakes or failures. We had two good games against [Miami] earlier this year, played good basketball. But, last year we beat them twice and they knocked us out of the [MAC] Tournament. ... Miami’s won three of their last four; they’re playing really good basketball. Probably since we played them last they’ve made adjustments, like all of us do, and they’re playing better basketball.”

Whitesell on the Buffalo players that have MAC Tournament experience, and have won:
“I think it helps (having that experience). A young guy like Jayvon Graves, he was a starter in that [2019 MAC Tournament Championship game], played very, very well in the conference tournament. I think he’s from Akron; or he’s right from that area. Ronaldo Segu and Jeenathan Williams, two kids that both played in the championship game, and they were freshmen then. Brock Bertram played in that game. So, we’ve got four guys that played in that game and in the [NCAA] Tournament. We talked to them, what that experience is about, and how you have to just focus in on one thing, playing Miami. That’s all you have to do. And after that, you just worry about if you have another opportunity. ... Last year, we were a younger group; everyone was kind of inexperienced and trying to figure it out. But, this year experience is our ally.”

You can listen to the entire interview with Whitesell below: